External stores on the A-10 Warthog

I would like to understand the hardpoint use for the A-10A during the 1980s. From various official and model-building sources, there are eight wing and three fuselage pylons, all permanently installed, with a total capacity of 16,000 lbs. It seems that the sum of the individual loads is greater than that, with restrictions on which pylons can be fully loaded at the same time. I've seen them numbered 1 to 11 from left to right, with 5 to 7 being the fuselage pylons.

Basically my question is how much each pylon could carry.

The underlying question is what a historically accurate yet visually interesting loadout for a Cold War tankbuster would be. Mavericks, Rockeyes, what else?

The declassified manual I have is from 1988; below shows the carriage of three 600-gallon tanks: 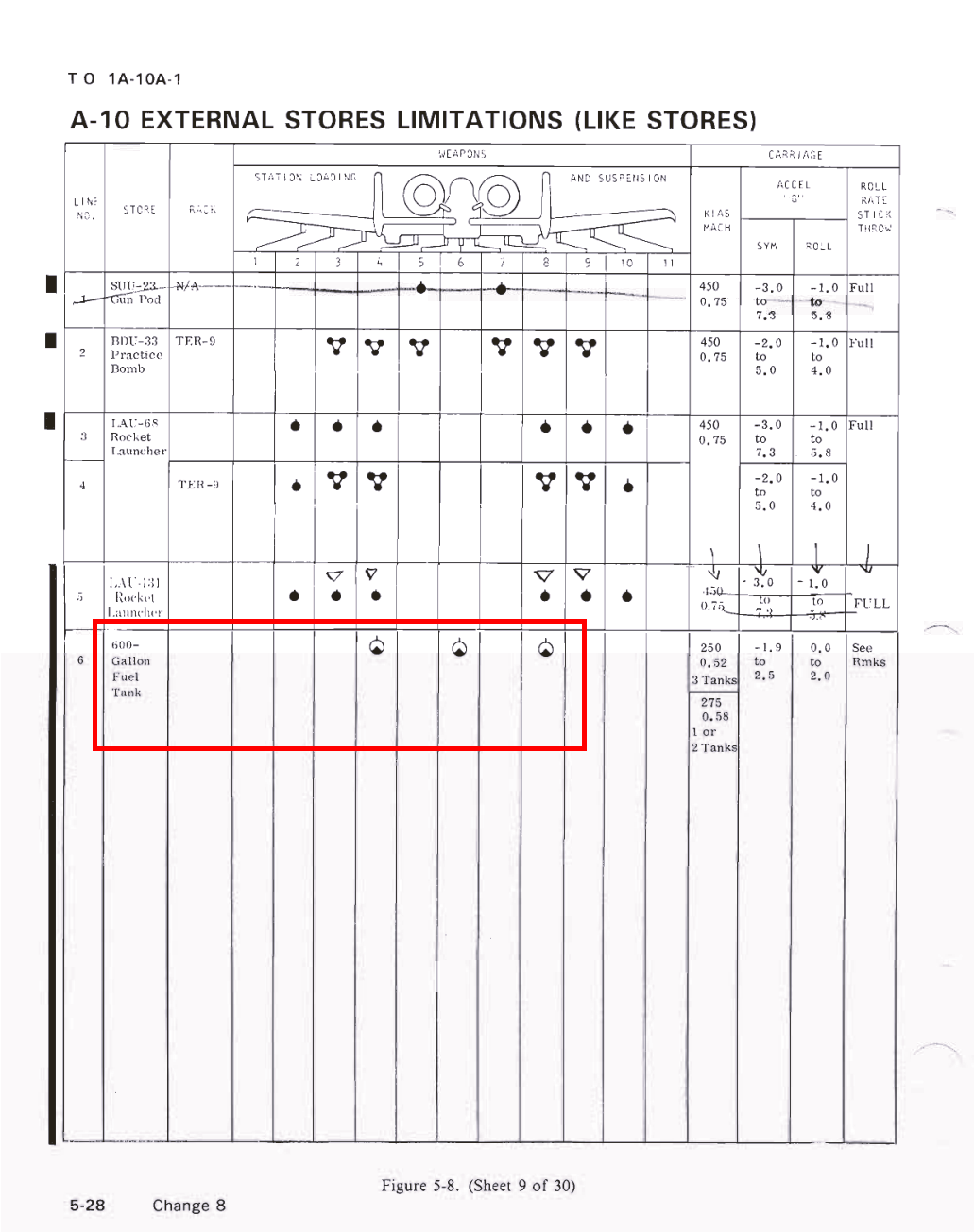 I don't have tables for unlike stores, but the limitation is expressed in torque:

Maximum asymmetrical load moment is 27,168 foot-pounds. Distance in feet from fuselage centerline to pylon stations is as follows:

I hope that helps. Anyone feel free to reuse and expand on the above in your answer.

Not the answer you're looking for? Browse other questions tagged aviation-history ordnance fairchild-a-10 or ask your own question.

37
Why did the Junkers Ju-52 have corrugated external surfaces?
24
What is the purpose of the box between the engines of an A-10?
8
Does the A-10 Thunderbolt fly without the GAU-8?
27
Does the cannon of the A-10 deliver more thrust than the engines do?
31
What are these 4 red spots on the A-10?
5
Is the A-10 Warthog being discontinued?
35
How much is airspeed reduced on an A10-Warthog when firing its cannon?
4
With similar weapons why does an AH64 Apache require a pilot and gunner when the A10 Warthog only needs a pilot?
6
Is the A-10's cannon effective against tanks?
9
Why can the A-10’s engines flame out merely from ingesting smoke from its gun?