Is the A-10 Warthog being discontinued?

Popular forum feedback on the A-10 Warthog is that it is held in high esteem however I also read that it is no longer being manufactured. Is this true and why would a highly successful combat aircraft be discontinued?

A-10 entered service in 1976 and is the only production-built aircraft that has served in the USAF that was designed solely for close air support(CAS). With huge losses of A1 (226) in Vietnam war called for development for a aircraft capable for providing air support to ground troops and conduct counterinsurgency. If we look at the history of development of CAS it had direct competition from Army helicopter ( e.g AH-56 Cheyenne) for the above mentioned roles.

The CAS study provided two important recommendations for the Air Force: “(1) the Air Force should take steps to highlight in official USAF doctrine, tactics and procedures publications the methods for accomplishing those missions for which the armed helicopters were provided and which the Air Force considered part of the close air support function; and (2) to fulfill the requirements for the 1970 plus time period, the Air Force should take immediate and positive steps to obtain a specialized close air support aircraft, simpler and cheaper than the A-7, and with equal or better characteristics than the A-1.Based on Air Force and contractor studies, the estimated unit flyaway cost for the A-X was \$1 - \$1.2M (FY70)depending on purchase quantities. Research and Development costs were estimated at 240Million \$. Also for the projected unit cost (FY70)for the turboprop version was \$0.837M (600 aircraft buy) - \$0.937M (400 aircraft buy). The projected unit cost for the turbofan version was \$0.989M (600 aircraft buy) - \$1.092M (400 aircraft buy). Hence with the budget that airforce had they put up a order of 715 aircraft. 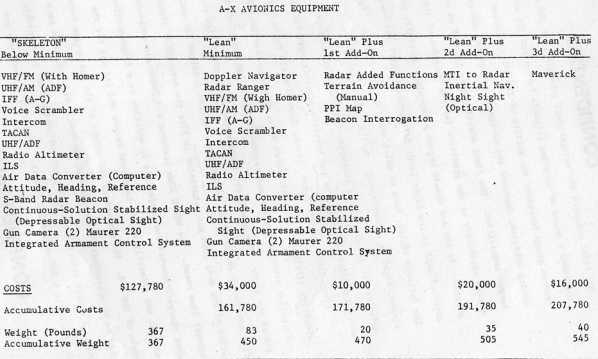 Production of the 715 A-10 aircraft finished in 1984. With A10 seeing most of action and noteworthy performance in Afghanistan and gulf wars by the turn of 1990s the aircraft was outdated in terms of avionics and more modern helicopters capable of performing same role (e.g Boeing AH-64 Apache). In 1992 air force purposed F-35 multi role fighter to replace A-10. To put numbers into perspective the U.S. Air Force stated that retirement of A-10 would save \$3.7 billion from 2015 to 2019.

With delay in F-35, air force retrofitted all A-10 and OA-10 aircraft in the fleet to the A-10C standard with a new flight computer, new glass cockpit displays and controls, two new 5.5-inch (140 mm) color displays with moving map function, and an integrated digital stores management system.

13
What does the term "white-scarf Air Force" mean?

16
Why isn't the F-15E called F/A-15?
27
Does the cannon of the A-10 deliver more thrust than the engines do?
3
Why are there no Mach 4+ fighter planes?
35
How much is airspeed reduced on an A10-Warthog when firing its cannon?
4
With similar weapons why does an AH64 Apache require a pilot and gunner when the A10 Warthog only needs a pilot?
3
What problems would the early F-16 have if they were to fight during night?
6
Is the A-10's cannon effective against tanks?
5
Does the F-16 have any armor at all?
4
External stores on the A-10 Warthog