Why can the A-10’s engines flame out merely from ingesting smoke from its gun?

Apparently, firing the A-10’s GAU-8 cannon can sometimes cause its GE CF34 engines to flame out from ingesting the smoke from said gun.

It’s easy to see how the gun’s smoke could be ingested by the engines:

(Image by 67blackcherry at The Gear Page, via @Koyovis here at avSE.)

Even when the gun is firing and its smoke is blowing into the engines, though, the vast majority of what’s going into the intakes is still air; even though it is true that, to quote Wikipedia, "[g]un exhaust is essentially oxygen-free", this exhaust is immediately forced into (and diluted by) ambient air the moment it leaves the barrel, and is blown back towards the engines (and diluted still further) by yet more air. And modern high-bypass turbofans like the CF34 are - indeed, have to be - designed to keep running even when quite a considerable proportion of the incoming air is not, in fact, air (I think I remember reading somewhere about small high-bypass turbofans being tested, successfully, for their ability to keep running when given a half-and-half mix of air and rainwater, although it’s possible that I might be misremembering). So how can gunsmoke ingestion be enough to flame out the A-10’s engines?

I found a 1955 NACA research memorandum entitled "STALL AND FLAME-OUT RESULTING FROM FIRING OF ARMAMENT", specifically looking at flameouts in the F-86, F-94, and other aircraft associated with the firing of guns or rockets (especially in the case of the F-94, which had a nose-mounted rocket pod). While the analysis in the paper does concern itself with a high speed (Mach 0.9) and high altitude (45,000 ft) scenario, I think that we can reasonable interpret its results for the A-10.

The paper points to the following factors following, from the aircraft firing a weapon, which could lead to an engine flameout:

(4) Entry of combustibles into engine

Of all of these, the first item was noted as the most significant, and the first step in the chain of events that results in reduced oxygen in the combustor, or, if you'd like it stated another way, an increased fuel-air ratio. Since the exhaust gas from the gun is much hotter than ambient (anecdotally, the gas block of an AR-15 can hit up to 600 deg F after firing 600+ rounds, so I'd imagine the barrels of the GAU-8 would be at least that) and does not cool completely before entering the engine, the engine has to deal with its effects -- and the first stage to see it (ignoring the fan) is the compressor.

The compressor of a jet engine is, essentially, a fan, but one that spins fast enough to compress the air coming into the engine such that you can burn fuel in the combustor and push the maximum amount of gas as quickly as possible out the back of the engine. However, in order to operate, the combustor needs a low enough fuel-air ratio to allow combustion (i.e., enough air to burn the fuel it's dumping in). Similarly, the combustor is a fan, made up of a series of airfoils -- if these airfoils stall, the combustor doesn't work anymore...again resulting in too little oxygen in the combustor to allow for combustion.

Considering inlet temperature first, we can think about it from a gas-law point of view. If I heat a volume of air, its density will decrease. Hence, if I'm taking the same volume of air into my engine and compressing it, I'm taking in significantly less oxygen on a per-molecule basis. If I take the ideal gas law as a rough estimate and double the temperature, my density is cut in half -- so now my engine has access to half the air. According to the NACA study (and your picture), gun gases typically spread out in front of the aircraft, leading to a greater heating effect in the surrounding air, even if that is more spread out. Between this and a momentum exchange between the gun gas and the ambient air, as the gun exhaust is slowed by the still, ambient air, the NACA study found that firing four 20 mm cannon reduced the inlet pressure to their study aircraft (an F-94, I believe) by as much as 9%.

So, this is a lot of hand-waving, so let's look at the effect all this on the jet engine in the NACA study. The temperature increase on the plot is an inlet temperature increase -- and it doesn't take much of a temperature rise to significant decrease the mass flow rate of air through the engine...and stall the compressor. 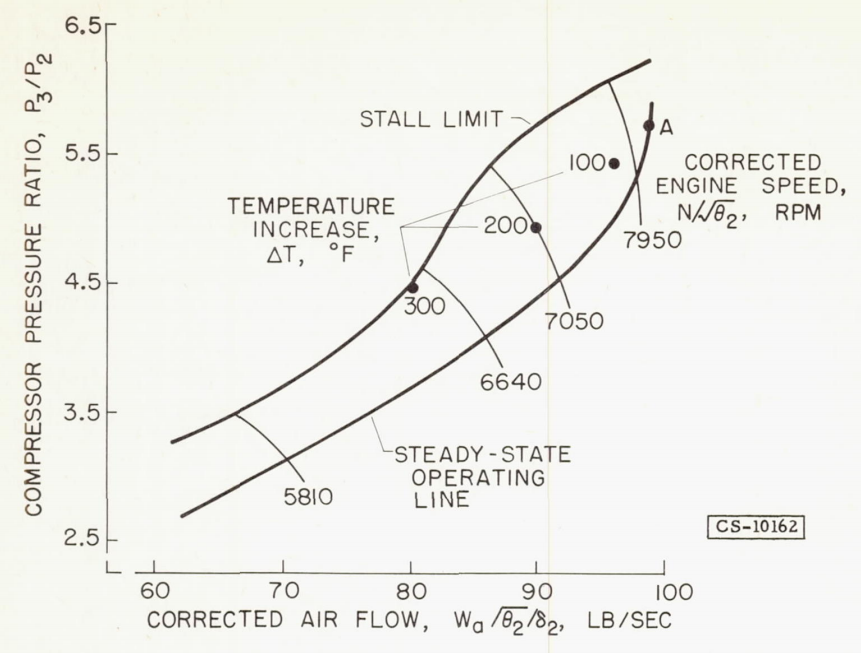 Compressor stalls can also occur due to distorted inlet air velocity profiles (a fan is typically designed for air to come in axially and uniformly), another side effect of exhaust gases non-uniformly mixing with the inlet air. Similarly, if burning particulate matter is ingested, this could change the velocity profile inside of the compressor itself by artificially decreasing the pressure ratio across the compressor. Naturally, if combustion is delayed until the combustor, these particles will have little effect.

You can also look at this from the perspective of the downstream effect of having less air moving through the engine, or the fuel-air ratio in the combustor. This could also be affected by a decrease in the available oxygen in the gun gases as well. 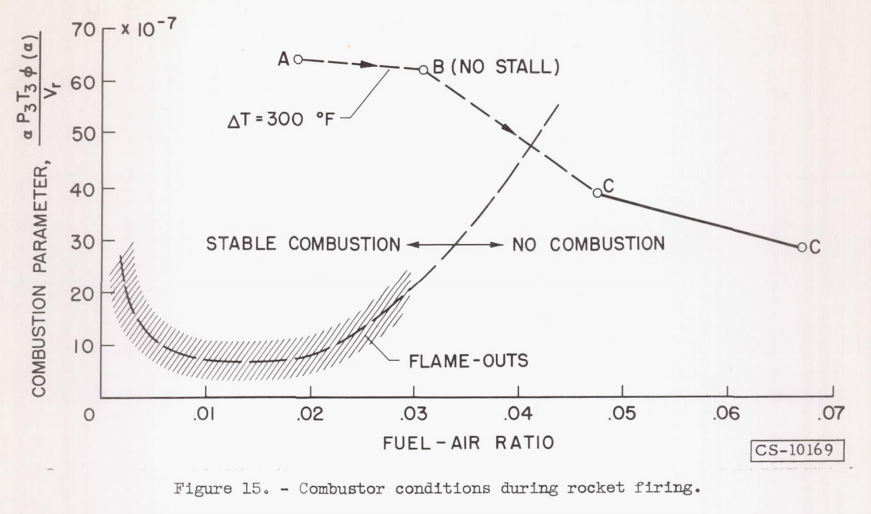 As we can see, though, changes in inlet temperature in the compressor appears to be the more sensitive parameter for this particular engine. As mentioned in the NACA report:

The increase in compressor-inlet temperature during armament firing is probably the most important single factor affecting engine performance. This increase in temperature is sufficient by itself to account for the observed occurrences of compressor stall and flame-out.

Hence, according to this article, the final solution to the A-10's problem (while gun gas deflectors and the like were considered) was a reformulation of the propellant used in its shells and the addition of a link between the gun trigger and the engine ignition system.

Not the answer you're looking for? Browse other questions tagged fairchild-a-10 flameout or ask your own question.

27
Does the cannon of the A-10 deliver more thrust than the engines do?