Why did the Junkers Ju-52 have corrugated external surfaces?

Every time I pass by Munich I have to pay a visit to the Deutsches museum, in particular to the aviation wing.

Among the other aircraft on display, there is a Junkers Ju-52. A different photo taken from a different website illustrates well what caught my attention: 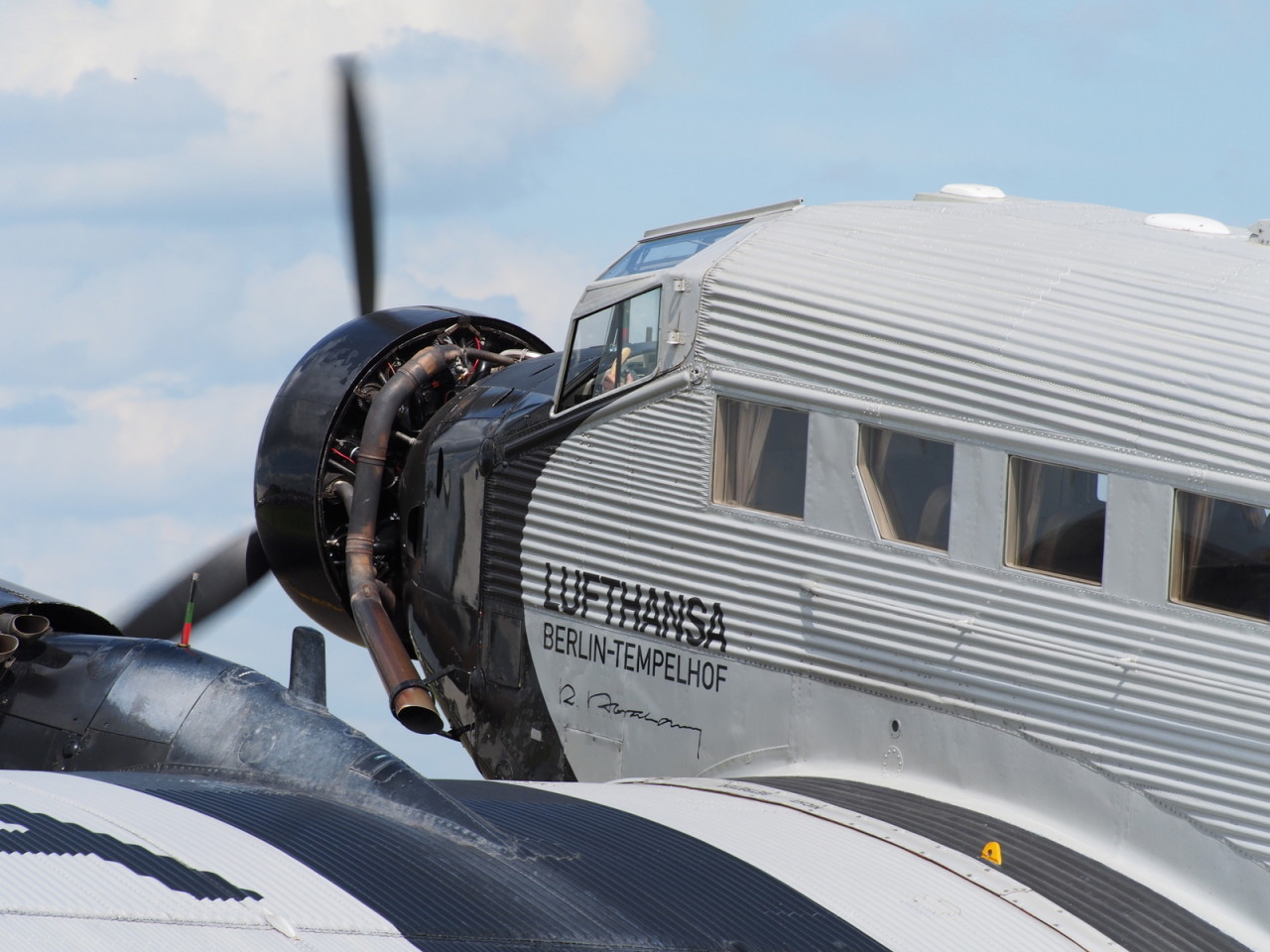 Why are the external surfaces of both wing and fuselage corrugated? Were the designers hoping to achieve some performance improvement through this choice? Are there any papers/documents about this?

It was largely a structural decision. The Ford Tri-Motor which was designed to mimic many things the Junkers plane designs included, including the corrugated metal.

...all of which were constructed of aluminum alloy, which was corrugated for added stiffness, although the resulting drag reduced its overall performance.

Corrugated metal is common for roof panels and ironically, hangars, these days. You can find some info on the strength and flex properties of it when related to those topics. Here is an interesting thread on increased drag (and load) on corrugated roofs.

As for the availability of the material vs sheet aluminum I would argue that it had little effect on the design choice. Keep in mind all corrugated aluminum starts out as sheet aluminum at some point in the line so its hard to say there is more than one or either material. On top of that it takes more corrugated material to cover a specific square area than flat sheet material which would drive the price up. At that time period in aviation a lot of experimenting was going on and anything that made a plane a bit stronger or a bit faster was considered quite an achievement. Keep in mind we are coming of the tails of the fabric plane era so a design like this would have seemed revolutionary. The Ju-52/3m (the one you have pictured) came out in 1932 (work began in '28), by that time other makers were already looking at and working on smooth aluminum body planes. There is of course a large social aspect to the availability of materials at this time in history especially in Germany. I will refrain form a full history lesson here but you can read up on Junkers history here and about the man him self Hugo Junkers here which include some of his political views and his involvement (and issues with) the Nazi party. His work in all metal designs is credited with inspiring many passenger planes in the post WW1 and WW2 eras of design.

The corrugated surfaces helped to save weight and drag, and they were readily available at the time. Today we would probably use sandwich panels for the same reasons, but 100 years ago those were not available.

Reissner-Ente from 1912. Flying direction is to the right.

When the war broke out, Junkers felt he needed to contribute and started to build monoplanes with cantilever wings from 0.2mm steel sheets with corrugated panels welded below the smooth outer skin. The corrugated substructure worked much like the core in corrugated cardboard. 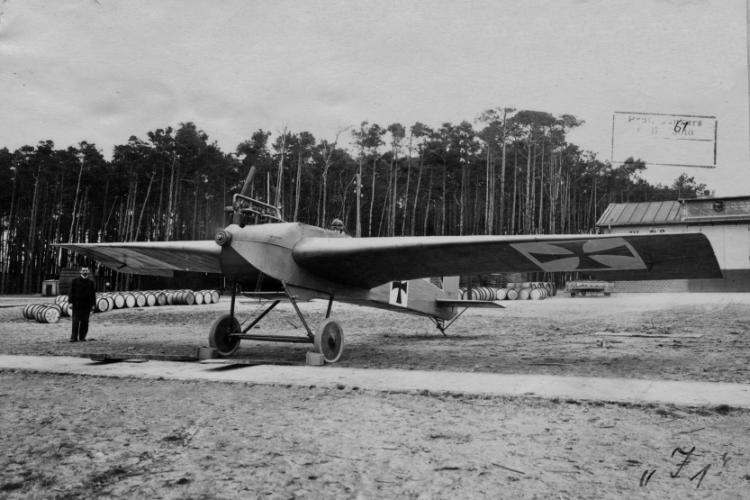 Unsurprisingly, this lead to flyable, but very heavy aircraft. To lower the weight of his designs, Junkers reduced the skin to the corrugated panels and did away with the smooth skin on top, and he switched from steel to aluminum, a material which he initially avoided to reduce cost.

The low power of the engines of that time demanded low wing loadings, and surface friction was a minor contribution to the overall drag of aircraft of this time. Junkers monoplanes were the fastest fighters around, since they had no bracing wires. An additional benefit in the war for independence of the Baltic states during 1919 was their robustness - the fast shifting front lines made solid hangars impossible, and wooden airplanes were unusable after rain, so on many days only Junkers airplanes could take to the air. 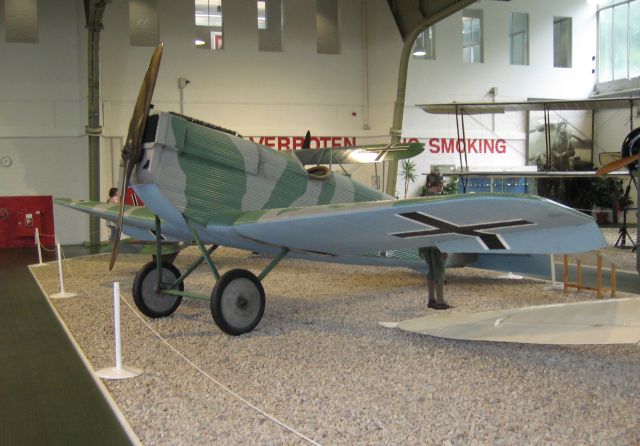 By 1932, when the Ju-52 flew first, this technique was already past its prime: Engine performance, construction techniques and wing loading had improved to a point that the better solution was to rivet stiffeners on the inside of a load-carrying skin. Junkers airplanes were very innovative first, but once the company had found a good way of producing robust, low-cost aircraft, it stuck to what it knew. However, Junkers' concept of a steel or aluminum truss plus the corrugated skin was heavier than the smooth monocoque skin which we still use on today's airplanes, and once aerodynamic drag could be reduced to a point where the drag increase due to the larger wetted surface of the corrugated skin could not be overlooked, even Junkers switched over. The Ju-52 was the last (and most successful) of the traditional Junkers aircraft, and the next one, the Ju-86, used the more expensive, but lighter monocoque design. Note that it had a retractable landing gear, but kept the Junkers Doppelflügel (the offset flaps and ailerons). 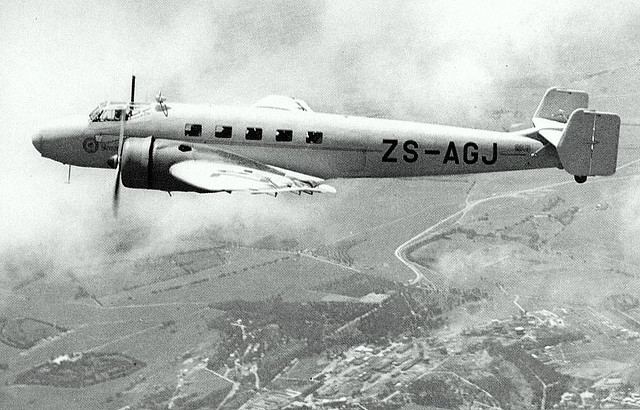 The corrugated skins on the JU-52 are a strengthening/stiffening measure: Corrugated skins are less prone to bending when loaded along the corrugation (the same reason we use corrugated boxes for shipping).
While there are likely some aerodynamic penalties as a result of this, small corrugations could be within the boundary layer and the overall trade-off between weight (to brace and stiffen the skin internally) versus aerodynamics may be favorable in some designs.

The use of corrugated aluminum skins is not exclusive to the JU-52: the Ford Trimotor also used corrugated skin. In modern designs the flight control surfaces of Piper's PA-28 family of aircraft are also corrugated - though far less dramatically, with stamped indentations to provide stiffness in lieu of internal bracing: 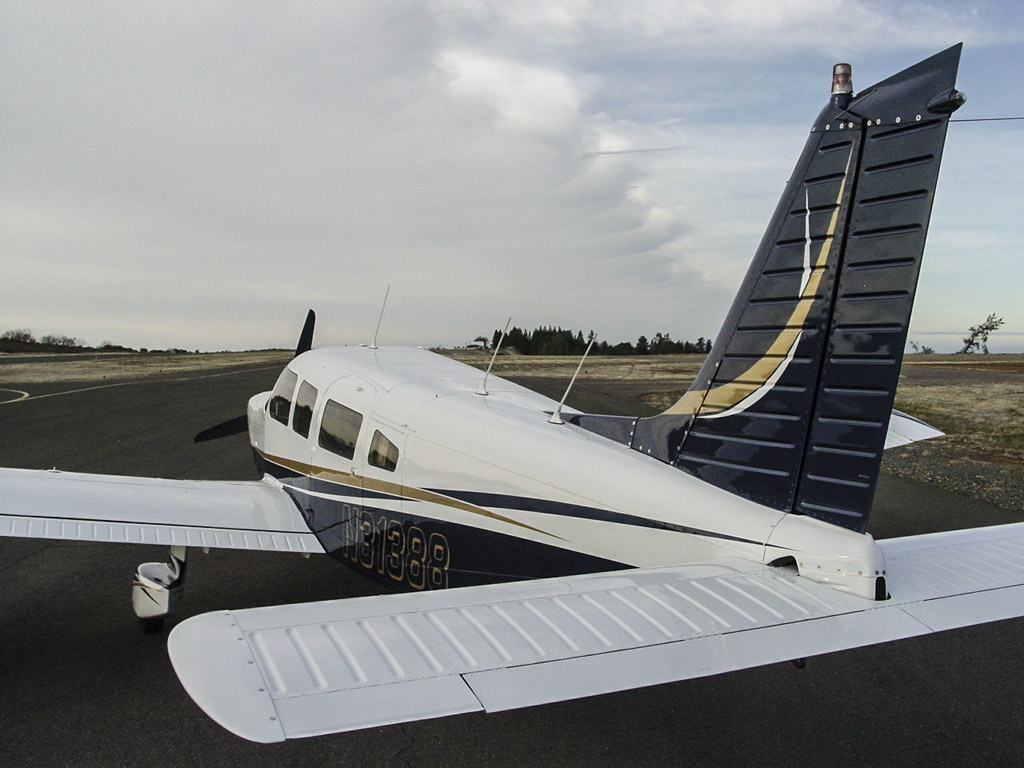 Short answer: To stiffen the skin in the direction of the corrugations, also the direction of flight, without adding internal structure or assembling multiple pieces that would increase weight.

Flat metal sheet was rolled to profile and bent to 3 dimensional form. The corrugations held the form along their length. Flat sheet would have required ribs, stringers or other formers to hold the shape. Corrugations have material in shear in the depth of one dimension, as well as across the length and width of the sheet.

This technique was used in other contemporary aircraft as well: The 1930s Polish PZL-7..11..24 family of fighters had corrugated skin on wings and tail surfaces, but not the large, rounded corrugations Junkers used. Pulawski's designs made use of the Wibault-patented all metal construction that was licensed to build Wibault 7s and 72s in Poland. Vickers also licensed Wibault's patents and their US patent shows and explains how a corrugated skin with smaller corrugations works.

The A-11/YF-12/SR-71 family have corrugated skin in their wings. In their case, the corrugation allows the whole air frame to expand and contract with heating and cooling. As with Junkers, PZL, Piper, etc, Lockheed's corrugations are chordwise, stiffening the skin fore and aft.

Some post-WWII designs had a sandwich of corrugated inner skin and smooth outer skin, like Junker's early steel-skin airplanes. Inspection/maintenance/corrosion protection must require focused attention and cost more in later years. But rolling and laminating constant gauge sheet has to cost less than integrally machined skins...

If you look up "monocoque"(external supported) structures, you will learn more about why the corrugated metal was used. It has extremely high "shear" strength. If you look at the PA-28 piper's horizontal stabilizer center panel with its corrugations, if that same piece were to be made of standard aluminum, it would bend if you pressed your hand from the top center to the bottom.

Not the answer you're looking for? Browse other questions tagged aerodynamics aviation-history or ask your own question.

16
What is a canard?
7
Why has aluminium, rather than steel, prevailed in airliner construction?
6
How are wood and canvas wings able to sustain damp and bad weather?
4
Can small RC aircraft utilize a steel sheet monocoque construction?
0
Would wing fences or chord wise corrugated tape increase the efficiency of a short span wing?

48
Why did the Ju-87 Stuka have a siren?
25
Why did WWII prop aircraft have colored prop tips?
13
Why did the F-104 Starfighter have a T-tail?
21
Why did some Caravelles have a very long dorsal fin?
32
Why did the DC-3 have wing sweep?
2
Why did the Bede Bd5 have strakes on the horizontal tail?
4
External stores on the A-10 Warthog
5
Why did Concorde have a large anhedral?