Are there any programs to build a hydrogen powered airplane?

So called "renewable energy" is a buzzword these days. Auto manufacturers are starting to roll out hydrogen powered cars. Hydrogen may not currently be the most efficient or economic fuel for jet engines, but that doesn't mean there are companies working on this issue or even a new kind of engine.

Are there any such programs in existence today?

Aviation is very energy-hungry. While hydrogen is quite efficient in terms of energy per mass (141.8 MJ/kg), it is awful in terms of energy per volume. Aircraft today use their wings for fuel storage, which helps to reduce bending loads and uses a volume unsuitable to transport payload. This will not work for hydrogen.

The biggest problem is storage, and none of the solutions is really attractive:

Currently a mixture of cryogenic and compressed storage looks the most attractive and has been tested widely.

The first (partially) hydrogen powered aircraft was the LZ-127 Zeppelin which used a mixture of gasses of equal mass per volume as air (Blaugas) to power its engines.

Tupolev designed and flew the Tu-155, the first hydrogen-powered heavier-than-air aircraft, in 1988. The results showed that the principle worked, but could not compete with kerosene.

Currently, several demonstrators are in operation, but none with the hope of widespread application - as it stands, binding hydrogen chemically to carbon will still give the best way of storage (liquid and unpressurized) for aviation.

Hydrogen becomes the best source of energy only when combustion speed is critical, such as in supersonic combustion ramjets (scramjets).

Airbus have claimed they aim to produce hydrogen-fuelled passenger planes that could be in service by 2035. They have developed three ZEROe concept designs. 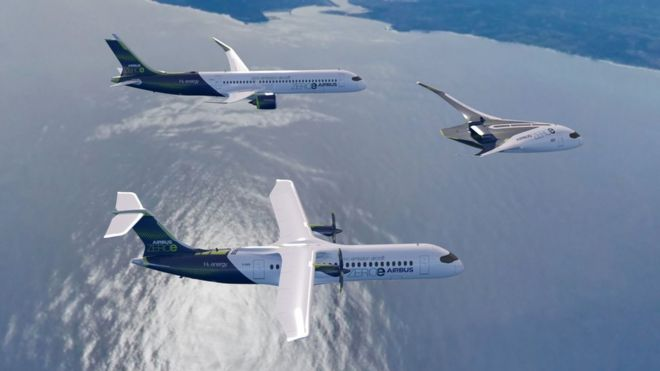 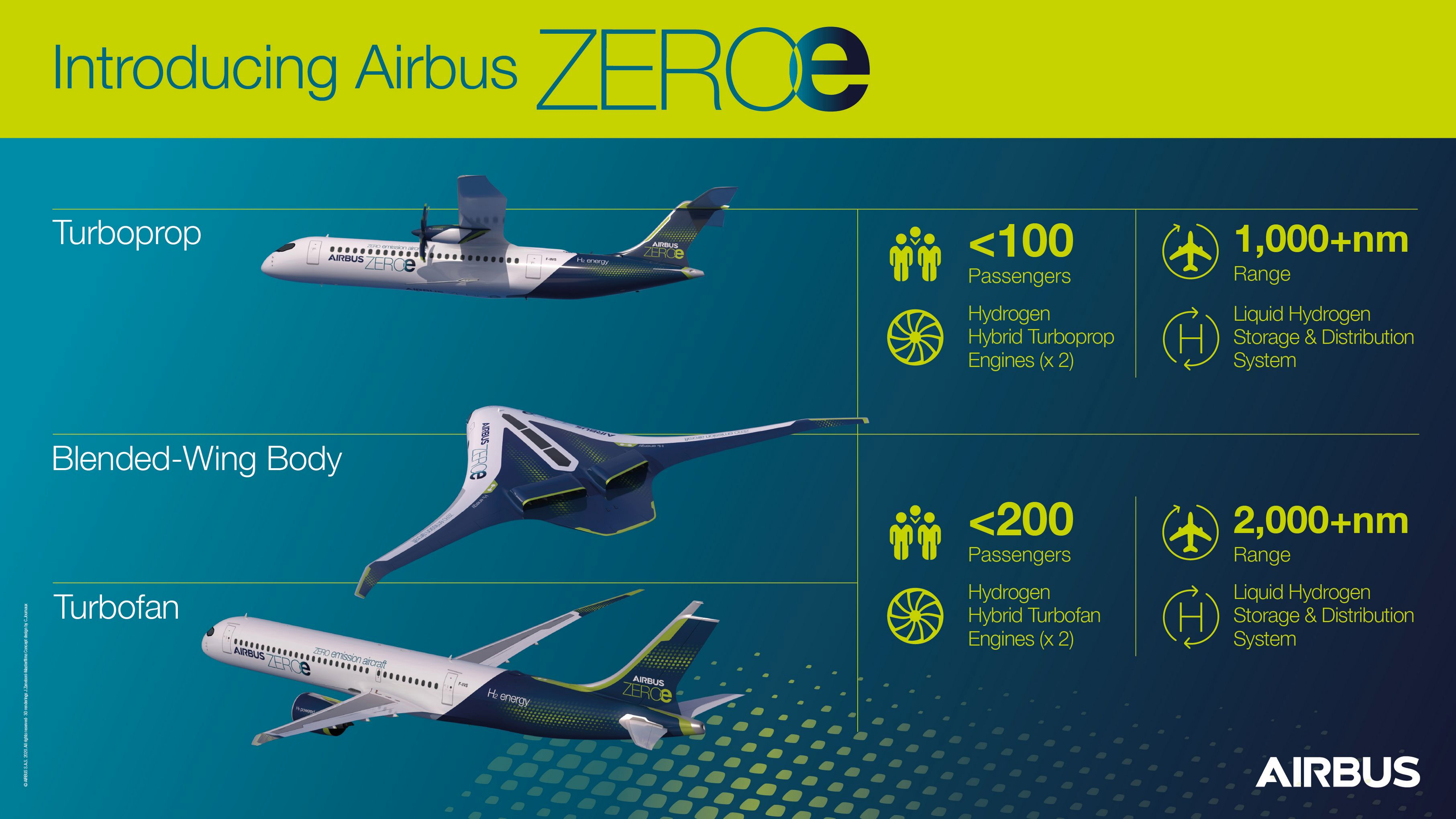 Unveiling its latest blueprints, Airbus said its turbofan design could carry up to 200 passengers more than 2,000 miles, while a turboprop concept would have a 50% lower capacity and range.

A third, "blended-wing body" aircraft was the most eye-catching of the three designs.

All three planes would be powered by gas-turbine engines modified to burn liquid hydrogen, and through hydrogen fuel cells to create electrical power.

However, Airbus admitted that for the idea to work, airports would have to invest large sums of money in refuelling infrastructure.

"The transition to hydrogen, as the primary power source for these concept planes, will require decisive action from the entire aviation ecosystem," said Mr Faury.

"Together with the support from government and industrial partners, we can rise up to this challenge to scale up renewable energy and hydrogen for the sustainable future of the aviation industry."

The new Airbus designs are the fruit of a joint research project that Airbus launched with EasyJet last year to consider hybrid and electric aircraft.

The airline's chief executive, Johan Lundgren, said: "EasyJet remains absolutely committed to more sustainable flying and we know that technology is where the answer lies for the industry."

BBC News: 'Airbus looks to the future with hydrogen planes'

Not the answer you're looking for? Browse other questions tagged aircraft-design engine fuel aircraft-manufacturer hydrogen or ask your own question.

0
Alternate for jet fuel
69
Why do jet engines use kerosene rather than gasoline?
41
Could an electric engine provide the same performance as jet engines on current aircraft?
60
Why can't jet engines operate with supersonic air and how do they slow it down?
29
Could there ever be a fully solar powered airliner capable of transatlantic flights?
14
Has anyone burned hydrogen in a gas turbine?
6
Would hydrogen fuel tanks on an airplane increase lift?
2
How can adverse maneuverability due to a fuel tank behind the rear pressure bulkhead be mitigated in Airbus ZeroE hydrogen plane?
3
Is there a viable alternative to liquid hydrogen as a fuel for scramjets?
0
Hydrogen as fuel for jet engine or afterburner
See more linked questions

6
Would hydrogen fuel tanks on an airplane increase lift?
24
Why are piston engines for aircraft rarely diesel powered?
11
Is there any work on improving fuel tanks so they could store hydrogen?
3
Is there any "copyright" for aircraft's design between different manufacturer?
4
Is it possible to build a flight-capable aircraft powered by compressed gas?
18
Are there any aircraft with powered landing gear?
1
Are there any aircraft powered by tip jets in the propeller blade?