Could there ever be a fully solar powered airliner capable of transatlantic flights?

Could a new or a modified existing airliner, e.g., a Boeing 737, be fully powered by solar energy and make the normal length trips aviation-fuel powered aircraft make?

Long answer: No. Look at the solar impulse project, this is some of the best solar-electric technology that's out there, and it's barely able to carry one person, very very slowly. If you took an airliner, covered it in the best solar cells available and connected it to the best electric engines available it probably wouldn't even be able to taxi.

Some science here: The maximum energy density of the sun on the Earth is about 1300 watts/meters squared. About 30% is lost in the atmosphere so the best you'll get on the surface of the earth is about 900 W/m2. The 737, for example, has 102 square meters of wing area, that would equate to about 90000 watts (90KW) of sun energy hitting the wing. The best power conversion we have of solar to electricity we have is about 10%, so you would get at most 9KW of power from a 737 solar array. As we see from this answer it takes 90 MW (megawatts) of power to get a 747 into the air, assuming it takes about 1/3 or that (30MW or 30000KW) to get a 737 into the air, then that array will only generate 0.3% of the electricity needed, and that's the best possible case in the strongest sun. If it's cloudy or at night you are completely out of luck.

Any solution based on current battery technology is addressed here, and it's very much a no at this point.

Theoretically it is not possible that a solar powered passenger airplane could be as good as a jet-a1 powered passenger jet, this is because the energy from the sun is not sufficient even if you had 100% conversion to electricity. If battery technology were to become orders of magnitude better to the point its energy density compared to liquid fuels then it very well could, this is a long way off, the best batteries that are currently lab concepts are about 1/5 of the density of liquid fuel. Once batteries get there then solar power could charge them for the flight. It's actually just as possible that solar power could be used to make liquid fuel in a renewable way from CO2 and other elements in the environment. Bio-fuels are solar powered, but we can't make much of a dent in fuel use with them without taking food off of people's plates, and personally I'd rather eat!

To cover a current-design airliner in solar cells and hook them up to electric engines spinning the fans will not work. Ever. Read @GdD's excellent answer for the reasons.

But today's car is also not a horse buggy with a gasoline engine. It has evolved and adapted to the possibilities. The same needs to happen to the airliner. Now let's look at what is possible. Looking back at the historic developments makes sense here, because the early pioneers also had very heavy and low-powered engines to work with, and still they could cross the Atlantic.

The first Atlantic crossing was planned by a Zeppelin crew in 1918, but the German government banned them from flying. So it fell to a British copy of a Zeppelin, the R-34, to cross the Atlantic in both directions in 1919. It had 5 engines of 270 hp each, which corresponds to 1006.7 kW. With a length of 196 m and a maximum diameter of 24 m the surface area available for solar cells would had been approximately 3000 m² which would provide just enough power if we assume solar cells with 40% efficiency and clear weather. Of course, cloud cover, lower solar altitude and especially nightfall would result in much lower power output from the cells. If we make the heroic assumption that the solar cells weigh as much as what can be saved in mass by modern construction techniques, a solar-powered, Atlantic-crossing airship is quite realistic. But it could not board many passengers and would be very slow.

Now to the heavier-than-air department. The Vickers Vimy which Alcock and Whitten-Brown flew across the Atlantic the same year had a wing loading of 40 kg/m². If we use a braced high-aspect ratio wing of the same wing loading, a very lightweight and efficient aircraft is possible. Covering the wing in highly efficient solar cells gives a power loading of 10 W/kg with 45% cell efficiency. How fast can we fly with that power? Let's assume an L/D of 30 and 90% propulsion efficiency, so we have 270 W of propulsive power per kg of aircraft. The minimum power required for flight is $$P_{min} = m\cdot g\cdot\frac{c_D}{c_L}\cdot\sqrt{\frac{2\cdot m\cdot g}{\rho\cdot S\cdot c_L}}$$ and expressing this in relative terms and concrete values at sea level: $$270 W/kg = 9.80665\cdot 30\cdot\sqrt{\frac{2\cdot 9.80665}{1.225\cdot 40\cdot c_L}}$$ yields a lift coefficient of $c_L$ = 0.475. This is actually quite low and corresponds to a flight speed of 28.73 m/s or 55.8 kts, something close to the maximum range speed of the Vimy. Covering the flight distance between La Guardia and Heathrow (2993 nm) would take 53.6 hours or two days and five½ hours.

If the sun would not set, a solar airliner would not be impossible - look at existing solar aircraft designs which have similar specs. The assumed high efficiency even allows to carry some payload, but that whole concept only works when the sun is shining brightly. To cover the dark hours, batteries must be taken along, and then the whole payload must be sacrificed to carry the batteries.

My answer is: If you cross the Atlantic in an airship, solar propulsion is possible in a not-so-distant future. Crossing it in a solar-powered airplane within reasonable time and in an aircraft sturdy enough to fly also in adverse weather will only become possible when super efficient batteries can be carried along to cover the power demands during nighttime. This is currently pure science fiction.

Yes. Note that your question does not specify how frequently the trips are to be made.

Take your Boeing 737, put as many solar cells on it as you can, connect them to a plant that takes H2O and CO2 out of the atmosphere and turns them into something suitable as jet fuel. When the tanks fill up, fly somewhere.

From the numbers in GdD's answer the plane will have to sit for years between flights, though.

It is impossible with today's and tomorrow's technology.

Nevertheless, "ever" is a very, very long time. Nobody can answer 'no' to your question with certainty!

This question doesn't specify whether the solar panels are attached to the plane or not. If the Boeing plane is restricted to it's own surface area, then the above answers are sufficient to explain NO>

Otherwise, if the solar panels are not attached to the plane, YES. With laser power. See here >

Most of the answers assume the sollar energy must be haverested on the plane itself, but there is not enough area there. But why?

It is possible to use a huge ground-based solar battery to decompose water into oxygen and hydrogen. Or just use hydroelectricity - rivers are powered by the Sun. Hydrogen powered airplanes exist. A large commercial hydrogen aircraft could be built by 2020 or about.

YES! it could be done.

I live 10mi from the first nuclear reactor in the world. It is a staggering thought to remember the United States went from the discovery of radioactivity to the nuclear bomb in just 40 years. What seems impossible today is less than $20 at Wall-Mart in 20 years.

I can see where a heavier than air hybrid blimp/flying wing like structure could satisfy all the requirements, A blended body would have a larger surface area than conventional airliner. I expect it to be done within the next 50 years - but will require thinking outside the present convention of what a passenger airplane should look like. 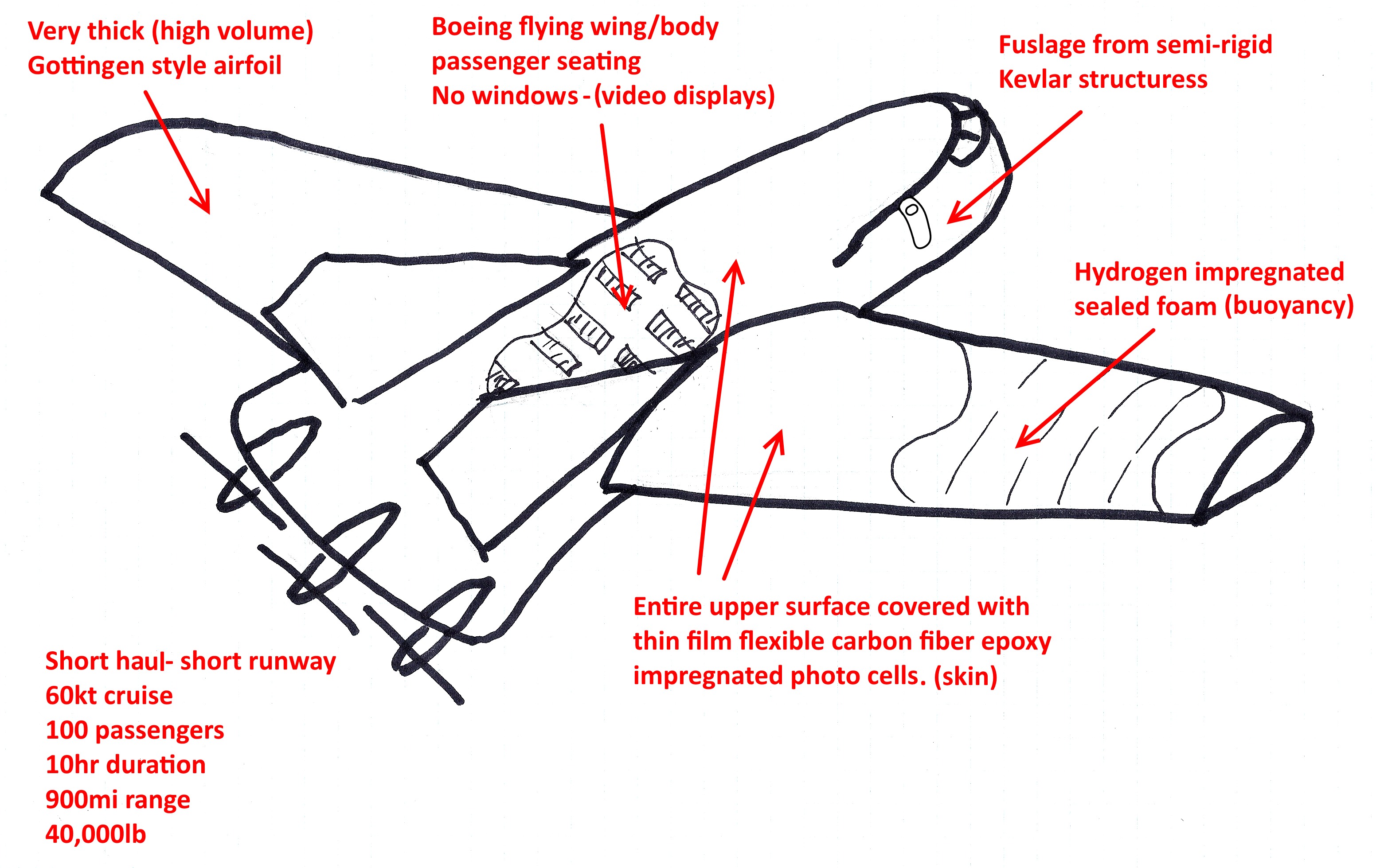 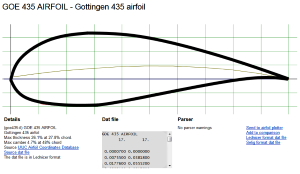 I would say yes, but it wouldn't be the type where the solar panels are directly powering the fans. It would require a whole heap of the best and lightest rechargeable batteries and the whole airplane would have to be covered in stick on panels, at best it would decrease the rate of discharge of the batteries. The top speed might only be like 400 kph given you'd be simply using ducted fans rather than turbojet engines but that would still be cool. If it means a big decline in fossil fuel burning I'd personally be happy for flights to take twice as long.

Not the answer you're looking for? Browse other questions tagged aircraft-design electric-engine solar-power or ask your own question.

21
How many kilowatts to get an electric 747-8 airborne?
17
Why would maximum fly-time (endurance) not coincide with max L/D operating point?
4
Are there any programs to build a hydrogen powered airplane?
11
How does the energy and weight efficiency compare between a battery/electrical propulsion and combustion engine?

12
What would prevent a solar powered aircraft staying aloft forever?
4
Will the Boeing 737 be built with a geared turbofan engine?
4
If the the body and it's wing is mostly covered with solar panels and flies with electric motors, is it possible for that aircraft to fly?
0
What is the feasibility of solar powered drones?
10
Why didn't Boeing or Douglas make a jet airliner before the British DH Comet?
7
Why don't solar powered aircraft use wings with more surface area
28
Is it true that different variants of the same model aircraft don't require pilot retraining?
1
Is it possible to have a fully electric airliner?