Is there any work on improving fuel tanks so they could store hydrogen?

I think that hydrogen is among the best fuels for use in supersonic and hypersonic flight, is there any work on improving fuel tanks so they could store hydrogen?

What would be the best state to store hydrogen for use as an aircraft fuel: solid, liquid or gas?

What are the complexities for storing it at each state?

First, to debunk a myth regarding the Hindenberg, which always gets brought up whenever hydrogen is mentioned. Hydrogen is less safe than liquid fuel, but it is not less safe than natural gas or propane. Hydrogen has a higher flame propagation velocity than hydrocarbon gasses, but contains much less energy per unit volume than hydrocarbon gasses. A huge airship filled with natural gas would be just as hazardous as a huge airship filled with hydrogen, yet we have natural gas pipework running to our houses and with proper controls there are very few incidents.

Nevertheless, hydrogen is not a good fuel for aircraft for the following reasons. 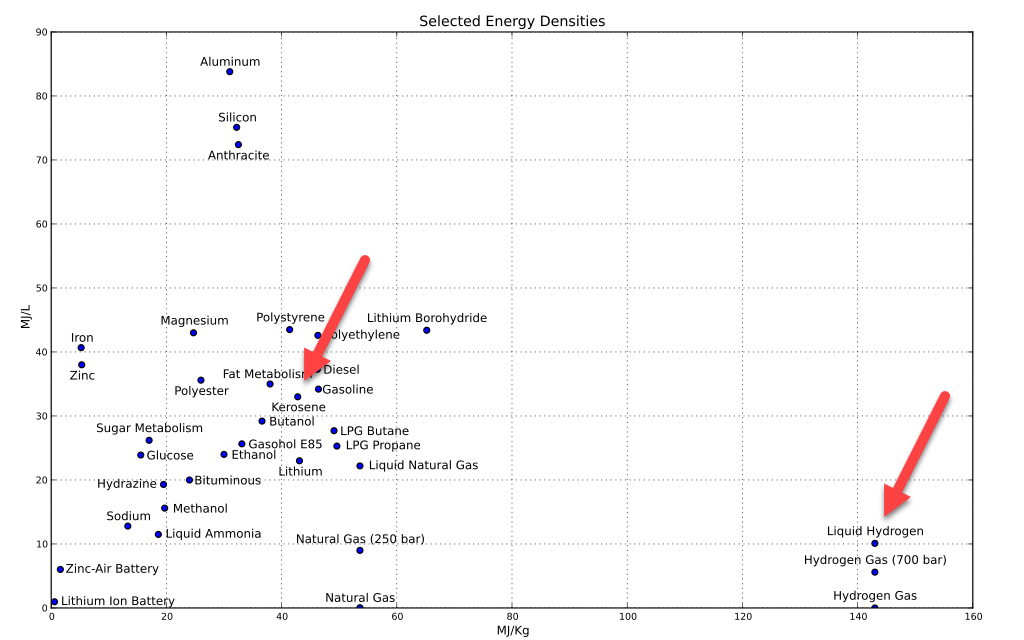 Above shows that hydrogen contains about 142MJ/kg of energy compared with about 42MJ/kg for kerosene. However it contains a lot less energy per unit volume. Liquid hydrogen contains only 10 MJ/litre while kerosene contains 33MJ/litre. Therefore hydrogen fuel tanks would need to be more than 3 times the size of kerosene fuel tanks. Gaseous hydrogen at atmospheric pressure would occupy hundreds of times more space, while hydrogen at 700bar is only about a factor of 2 worse than liquid hydrogen, but the weight of a vessel for holding 700bar pressure would negate the weight advantage of hydrogen.

Therefore the most practical way of storing hydrogen in an aircraft would be in the liquid state, as is used in spacecraft such as the Space Shuttle. Use of hydrogen would result in some weight savings and hence fuel savings. However the fuel tanks would be so big that the savings would be partially negated by the the additional drag (not to mention the additional weight of the larger tanks.)

Hydrogen is expensive to produce and liquefy. Most hydrogen is produced by reforming natural gas and steam into hydrogen by the reaction CH4 + 2H2O = CO2 + 4H2, which is a highly energy intensive process. Therefore, although a hydrogen fuelled plane might consume less energy than a kerosene fuelled plane, this does not take into account the energy used in the process of producing and liquefying the hydrogen, nor the cost involved in doing so. Overall, hydrogen fuel is likely to be more expensive.

Hydrogen is also more difficult to handle. hydrogen tanks are never perfectly insulated, so hydrogen boils off, and the tanks ice up. It is also, more hazardous than liquid fuel if a spill occurs, as it will evaporate and create an explosive mixture in air (though, as I have said above, this issue also applies to natural gas.) Liquid hydrogen is much colder than liquefied natural gas, and so creates more problems with materials, boiloff and icing.

Industrial gas turbines can run on hydrogen without too much modification. But with the extensive certification procedures for aviation, modifying an aircraft engine for hydrogen will be quite costly. Also the faster flame velocity of hydrogen means that NOx is more difficult to control and this is likely to cause problems with emissions regulations.

In conclusion, the only way hydrogen is ever going to be viable in the aviation industry in general is if it turns out to be easier to use in a fuel cell driven craft than a hydrocarbon fuel.

If economically feasible, a fuel cell / electric motor drive would be more efficient than a combustion jet engine. That said, the practical and safety issues mean that the aircraft industry will be one of the latest adopters of such technology.

In gaseous form, the amount of -- the mass of -- hydrogen you could store in the volume of aircraft fuel tanks would be negligible. In order to store enough mass of hydrogen, you'd have to store it liquified, which is how it's stored in rockets.

In order for that to be useful, though, you'd have to have engines entirely redesigned in order to burn cryogenic fuels, which would be a massive undertaking. I'm not aware of any serious interest in using cryogenic fuels in aircraft today. Kerosene works well and, compared to liquid hydrogen, is cheap and relatively safe to transport and store.

Rockets use cryogenic fuels because they absolutely need all of the "bang for the buck" that they can possibly get, so the high cost and extra safety measures are accepted in that realm as a necessary cost of doing business. This thread discusses rockets using cryogenic fuels or a mixture of cryogenic fuels and kerosene. The bottom line, they often use cryogenic fuels -- especially in upper stages -- in order to get more payload to orbit.

Unless something changes in the economics of kerosene vs cryogenic fuels, however, it seems improbable that aircraft will switch to liquid hydrogen on any great scale.

Consider the nature of liquid hydrogen. In a liquid, non boiling state, it must be at a temperature of 22 Kelvin, which is -253C/-423F. Extremely cold. This calls for heavily insulated containers, and an accidental release could be extremely dangerous. A few gallons of liquid hydrogen spilled on you would turn you into an ice cube almost instantly.

Today, liquid H is used as fuel in a few specialized situations that benefit from its high energy density: largely rockets, although it has also been used (combined with fuel cells) in some AIP submarines. These are areas where the additional complexity and expense are outweighed by the benefit.

In commercial use, it would be handled every day in high volume, so the complexities of dealing with this extremely cold substance would be magnified, as would the dangers of accidental release. And there is still the issue of the pollutants left over from burning hydrogen in the atmosphere.

In his book Skunk Works, Ben Rich describes an effort to retool the A-12 Oxcart aircraft (later to become the SR-71) to run on liquid hydrogen, to extend its range. He reported that by the time they had added the heavy insulated tanks, the range of the A-12 would have been extended only a couple of percent, plus the complexities of midair refueling, so Kelly Johnson killed the project and sent the project money back to the government. That was with 1960's technology, better methods may be available today, but that does illustrate how hydrogen as an aircraft fuel isn't quite the wonder solution it might seem to be.

On top of that, consider that free hydrogen doesn't exist on the earth in any great volume. It must be manufactured by electrolyzing water, which takes a lot of electricity, and that adds to the cost. Hydrogen can also be produced by catalyzing natural gas, although done in volume, there would be a lot of leftover chemicals to dispose of.

Should a practical fusion reactor be developed, then it is possible that hydrogen as a fuel for general transportation use would become viable. In aircraft, it could be utilized in fuel cells to power electric motors, to bypass the pollution issue.

A hydrogen fuel tank, by nature, must be cylindrical. To save weight it must be short and stout, not long and narrow.

On an aircraft, it must also be at the center of gravity, so it does not throw the aircraft out of balance as fuel is spent. This also necessitates a short tank, not a long length-of-fuselage tank (all the hydrogen would roll fore or aft during maneuvering, crashing the aircraft).

Hydrogen is a very low density fuel, so the fuel tanks are enormous. The lion's share of the tank space used on the Shuttle main tank was for the hydrogen.

That means there is only one possible place for a hydrogen fuel tank on an aircraft: the center of the fuselage (typically over the wings). Pretty much the entire width of the fuselage. What's left for the passengers to sit in? The very front and rear fuselage. That means separate crews too - passing through the tank area would be impracticable, unless the aircraft had a "blister" up top like a 747.

This also defeats all the design efficiencies of carrying the fuel in the wings. That means the wings need to be stronger to carry the lift to where the fuel weight is. That matters.

Not the answer you're looking for? Browse other questions tagged fuel fuel-systems fuel-tanks hydrogen or ask your own question.

6
Would hydrogen fuel tanks on an airplane increase lift?
9
Are tripropellant jet engines a viable way to increase fuel efficiency for large commercial airplanes?
3
How are fuel tanks tested and certified?
3
Is there a viable alternative to liquid hydrogen as a fuel for scramjets?
3
Are there any 100% renewable energy aircraft in development?
16
Can hydrogen gas be an alternative fuel source for a gas turbine engine?
8
Why was the Graf Zeppelin's endurance when fully fuelled with both fuels less than the sum of its endurances with each fuel separately?
2
How can adverse maneuverability due to a fuel tank behind the rear pressure bulkhead be mitigated in Airbus ZeroE hydrogen plane?