How much does Earth's rotation affect flight times in going East or West, and how could you calculate if zero winds?

It does not affect as much as one would think.

Now you may ask when does it take longer when we travel from Western Europe to Eastern USA, compared to USA to Europe? That depends on Jet Stream:

Many air routes take advantage of jet streams, as you can see as follows: 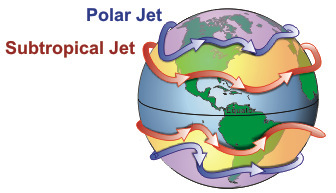 Pilots know about the jet streams and will try to gain benefit of them. Recently, there were some news that a flight from New York to London traveled faster than expected because it was in jet stream (details here and here).

If you want to know why Earth's atmosphere moves with it, please see this.

There is a similar question on Physics.SE.

It affects flight time the same way that it affects driving time.

Airplanes primarily measure their speed through the air (airspeed), and the air tends to move with the ground, so the situation is the same. If the air is not moving the same as the ground, it's called wind, which is the primary influence on flight time. Wind is influenced by the earth's rotation, but the rotation doesn't directly influence flight time.

This is a physics question, not an aviation question, and might better be posed on Physics StackExchange.

Simply put, the question has an infinite number of answers! Let me explain.

When you are stationary in a helicopter, waiting to take off, with reference to an observer also standing next to the helicopter, your speed is 0.

The atmosphere you are about to fly in (assuming zero wind) is also moving at the same speed. If its speed was zero, with reference to the stationary observer in space, then the 1040MPH wind might make flying a little difficult.

You lift into the hover. Now to both observers, you are still doing the same speed because speed is a scalar and you have added no force to change your horizontal speed. To the observer standing near the helicopter, the earth, the helicopter and the air it is flying in are all moving at 0 speed. To the observer in space, they are all moving at 1040MPH.

By picking any arbitrary observer, at any point in space, and doing any speed you choose, you can see that there are an infinite number of answers to the question.

Only by asking the question with reference to a specific observer, can you answer the question.

If you ignore wind and side effects such as the Coriolis effect, the earths rotation has no effect on your journey time since you and the craft you are in must move at the same speed within the same frame of reference, relative to any given observer, together.

Not the answer you're looking for? Browse other questions tagged weather flight-planning or ask your own question.

45
Why do flight times differ between traveling East versus traveling West?
1
What is the effect of earth's speed on flight?
0
Why can't a plane flying due west just hover in the air and wait for the destination country to arrive?
0
East-West and West-East flight times in relation to earth's rotation
7
What factors besides tail/headwinds cause the time taken to fly some routes to be different from the time it takes to return?

13
Where can I find regulations in different countries for flight level rules based on direction of flight?
22
Why is the flight going north just to go south?
9
What is the proper procedure to change altitude when changing heading?
7
What factors besides tail/headwinds cause the time taken to fly some routes to be different from the time it takes to return?
7
How does a pilot make sure they have received all applicable NOTAM's?
3
What is the strongest jetstream ever encountered in commercial flight?
4
How does Air Traffic Control know a flight's route and destination?
4
Do aircraft weigh less on an eastward flight than a westward flight, due to the Eötvös effect?