Why do flight times differ between traveling East versus traveling West?

Why does it take longer to fly East to West than West to East?

Which factors affect this?

As Robbie's answer implies, the answer is wind - Trade Winds govern what happens on or near the surface and were historically important for sailing ships, and today in aviation we deal with the the Winds Aloft at whatever altitude your plane is flying.

As an example, consider two hypothetical flights at 30,000 feet with the winds shown below: 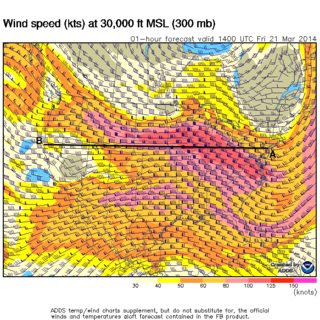 With these winds a flight from A to B (East-to-West) will be fighting headwinds the whole way. My handy flight planning program tells me that at 500 knots (airspeed) you'd be in the air for about 5 hours 30 minutes.

Traveling in the opposite direction from B to A you'd have a tailwind, and with the same 500 knot airspeed you would make the trip in roughly 4 hours.

The winds aloft vary seasonally, which can affect flight times for summer versus winter trips. According to one of our folks who is regularly up at those altitudes even the daily variations can be noticeable, and may make the difference between being able to make a nonstop trip or having to stop for fuel on the way.

Pilots and flight dispatchers will often review the wind data prior to flight and try to select an altitude that affords a "good ride" (free of turbulence) and favorable winds (either a tailwind or the lowest headwind they can find).

The main reason for the difference in time are trade winds.

Trade winds generally travel East to West, and so aircraft travelling in this direction have a faster ground speed, that is the speed relative to the ground. The true air speed of any aircraft is not affected by the wind.

Seven years late!) but none of these answers gives a comprehensive explanation, particularly in that the OP's premise "westbound travel is slower" is only correct at certain latitudes. Both the prevailing winds and the jet stream affect duration of air travel, and both depend on differential heating and the rotation of the Earth.

This diagram shows the macro air circulation patterns around the globe. Generally, air is heated at the equator and rises, then travels at high altitude towards the poles. At about 30deg latitude the air mass has cooled sufficiently that it wants to descend, then heads at low altitudes back towards the equator. This is the Hadley cell. From space, these airflows appear largely Northerly and Southerly. On Earth, the Coriolis effect makes the airflow also appear Easterly and the result is called the Trade Winds. Here, westbound air travel is faster than eastbound. 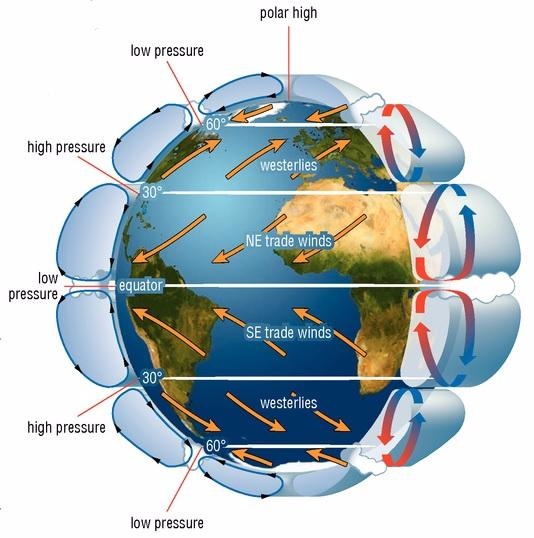 Polar and Hadley are driven by polar cold and equatorial heat. If the Earth were smaller they would combine into one cell. At the existing scale an intermediate cell forms, the Ferrel cell, and its direction is driven by contact with Polar and Hadley at 30deg and 60deg.

Polar makes a "chimney" at 60deg which is shown on the chart as low pressure. Hadley makes a downdraft at 30deg, shown as high pressure. The Ferrel air mass flows from high pressure to low, or toward the poles at low altitude. With airflow reversed the Coriolis effect now makes the winds appear westerly, and are aptly called the Westerlies. This is where air travel in the US and Europe occurs, and this is where the OP's "westbound travel is slower" applies.

This phenomena occurs in addition to the prevailing winds and is affected by the same factors. There are usually four jet streams, one located near each of the vertical air flows between the circulation cells. The 60deg latitude Polar jet streams are stronger and lower than the 30deg Subtropical streams, and this explanation focuses on the northern Polar jet.

From this diagram you can see circulation in the norther Polar Jet. Looking Eastward in the direction of the jet stream airflow there is a counter-clockwise rotation between the Ferrel and Polar cells. Though this entire column of air is ascending, the temperature differential between the colder air of the Polar cell and the warmer Ferrel air causes this weak rotation. Location and altitude fluctuate, but the lower reaches are around 30-40kft where transport aircraft fly.

You might think that the lower altitude flow toward the equator would combine with the Coriolis effect to create a mild easterly flow as happens in the Polar easterlies. It does attempt this but runs into the much stronger Westerlies and is deflected, accelerating as it moves in a westerly direction. Think wind blowing into a wall, deflected to move along its length. Depending on local temperatures, the deflected air can reach speeds as high as 200kt.

So both atmospheric heating/cooling and the Earth's rotation via the Coriolis effect determine the direction of the prevailing winds, and consequently the amount of time air travel takes in a particular direction.

The jet stream moves from West to East. At the altitude an airliner flies the speed of the tail wind or head wind will have a significant impact on actual ground speed. This was first observed when B-29 bombing raids on Japan during WW2. Before that there was no notion of a 'jet stream'.

Short answer: As you have indicated in the question description, the answer is winds. Better known as Jet Streams.

Although the rotation of the earth and weather created by solar energy do affect the air circulation of the planet, and jet streams aloft, the main reason why west to east flights take "longer" is that flying east into new time zones adds an hour to your landing time for each time zone flown through. Opposite flying west.

Some of this is made up for when flying at the latitudes of west to east jet streams when travelling east, so the actual flight time going east under those conditions will be shorter, even though you arrive at a "later" time.

A closer look at your flight time based on your original time zone may give greater insight to your question, and maybe a little less "jet lag".

Both the winds and earth's rotation affect the difficulty of flight eastbound vs. westbound. If eastbound is slower and harder and winds carry you westbound, I take it you're within the tropics, where the tradewinds govern flight direction. Kentucky and Utah, and farther north latitude (and likewise south to Argentina) the winds work in the opposite direction.

The poles and equator differ in (eastward) rotation speed. The equator has farther to go and keeps up with the axis by going faster. So land nearer the axis (Canada, Argentina) takes it slow spinning east, slower than wind and weather. So that's where to take advantage of the winds eastbound. The tradewinds are at the equator, where the ground follows (east) a bigger circle, faster than wind and weather. There, the westbound is more efficient.

I'm not sure about Alabama/Arizona/etc, but I wager the eastbound and westbound are about the same, since they are in-between the north and tropics (and Bolivia the in-between of the southern hemisphere). The latitude makes quite a difference.

Unlike planes being pushed by wind, space shuttles leave the atmosphere. Being propelled only by earth's rotation, all rockets go east no matter the latitude.

It is simple. The Earth rotates from East to West. There is hence an eastward shear effect in the atmosphere. If you fly East, this shear adds to the cruising speed. Reverse case if you fly west. So more time if you fly westwards. But how much more depends on the prevailing wind-shear. This cannot be pre-determined except when you actually fly and meter the wind speed.

Not the answer you're looking for? Browse other questions tagged airline-operations winds-aloft or ask your own question.

10
How Earth's rotation affect flight times?
1
What is the effect of earth's speed on flight?
1
Why westward flight takes longer time?
1
Flight time between Taipei - Vienna vs Vienna - Taipei
0
East-West and West-East flight times in relation to earth's rotation
1
Why east-bound flight is faster than the reverse flight along the same route?
12
Why does flight duration differ for the same flight?
3
If planes can go faster, why don't airlines fly faster?
7
What factors besides tail/headwinds cause the time taken to fly some routes to be different from the time it takes to return?
0
Why do flights from Tel Aviv to Honolulu go west?
See more linked questions

35
Why don't airliners use in-air refueling systems?
9
Why will reducing the boarding time reduce the costs?
4
Do airlines schedule departures based on average environmental conditions of departing airport?
12
How long does flight planning take / when is it done / how is it done?
3
What is the strongest jetstream ever encountered in commercial flight?
3
How are extreme winds aloft handled and how do they affect flight?
20
Why didn't Air India always fly DEL-SFO over the Pacific?
6
Why offload bags for missing passengers when flights are allowed to carry unaccompanied non-PAX air-cargo in holds?
2
How long does it take for an airline to establish a new international destination/route?