How did this air force plane likely get into the eye of Hurricane Florence? [duplicate]

The annotation for this CNN video says

Watch as a US Air Force plane flies into the eye of Hurricane Florence to collect weather data for the National Hurricane Center. Source: CNN

But I can't find any information on what kind of plane this is nor how it safely got into the eye in order to record this.

Would they generally fly through the storm at this altitude, or do they fly above it to reach the eye, then "drop down" into the eye? 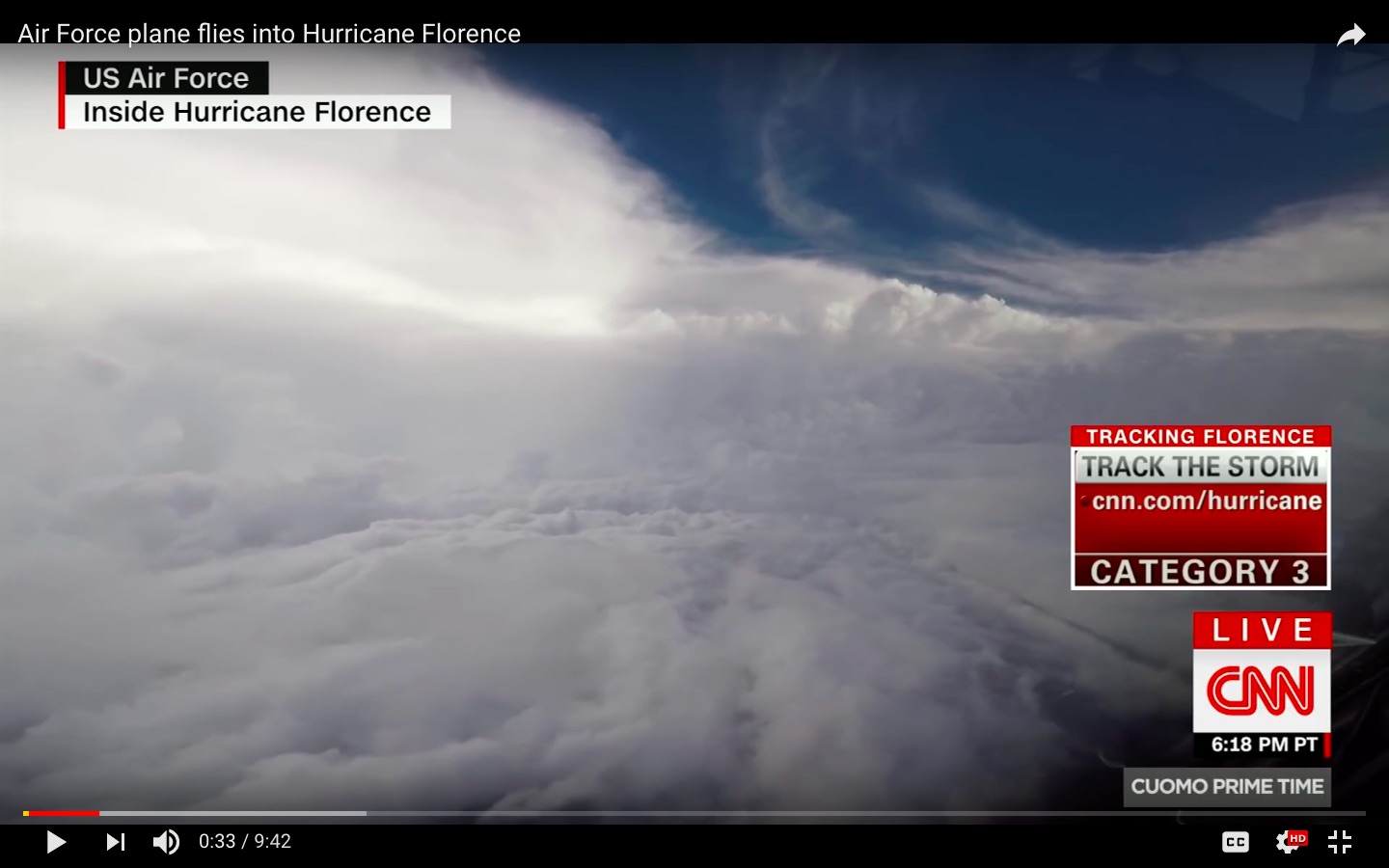 They fly straight through, as part of their mission to collect meteorological data about the storm, used for forecasting (NOAA's G-IV fleet flies the periphery of storms to collect data used to help predict the path of hurricanes). A typical path:

We'd begin by making a "figure 4," with the vertical and the horizontal legs crossing at the center of the eye.

This image shows the flight path taken during one observation of Hurricane Patricia in 2015 (from this blog post).

Wikipedia has information about "hurricane hunter" operations, and Google produces many, many results about how these flights work, including videos (even an entire documentary series) and interviews with the crews that fly them. Here's a recent news story featuring an interview with an Aerial Reconnaissance Weather Officer who flew into Hurricane Florence.

The US Air Force's 53rd Weather Reconnaissance Squadron flies the WC-130 (a C-130 variant equipped with meteorological observation equipment and dropsonde deployment capability). Additionally, the National Oceanic and Atmospheric Administration flies a fleet of two WP-3D Orion aircraft (modified P-3 Orions) and one Gulfstream IV, which flies around the periphery of storms to collect weather data.

You can plot their exact flight paths on Google Earth, if you're so inclined.

The Hurricane Hunter Association's site also addresses this question in their FAQ:

Do you fly over the top of the hurricane? NO!!

The tops of a big hurricane can be over 50,000 feet high, and our planes could never get up there (they can only go up to 30,000 feet). Besides, the weather we're interested in is down at the bottom of the storm, where it will affect the coastline it hits. For this reason, we fly in as low as possible and still be safe. This altitude can be anywhere from 1,000 feet to 10,000 feet.

They also include an image of their typical "alpha" flight path, typically making four passes through the center of the storm.

The US Air Force 53rd Weather Reconnaissance Squadron's main task is to gather data about storms. They fly C-130s into and around storms including hurricanes.

Not the answer you're looking for? Browse other questions tagged weather us-air-force extreme-weather or ask your own question.

20
How does NOAA's P3 Orion safely navigate hurricanes?
25
Is the aircraft used by NOAA specially modified?

8
Can a commerical jet fly into a tropical cyclone?
15
Have the results of the USAF's $AVE program research been implemented?
11
Is it possible to “take a bullet [missile]” for another plane as shown in the movie Air Force One?
31
What is this on top of the Air Force One?
7
What airframe design is best for stormy weather?
20
How does NOAA's P3 Orion safely navigate hurricanes?
13
What does the term “white-scarf Air Force” mean?
20
What is this old US Air Force plane?
2
Why doesn't the air force order more F-22's?
19
Does the Air Force (United States) help design their own planes?