What does the term "white-scarf Air Force" mean?

Ron Gordon's answer to question about A-10 cannon mentions "white-scarf Air Force". As civilian, subtlety was lost on me. What does it mean? From the context, looks like fighter pilots? Are the scarves of other colors, and what they are?

"The white-scarf Air Force has an averse to building flying tanks and particularly doesn't like single-mission, CAS systems. They never will forget that the A-10 was forced on them."

A white scarf air force is one that values aircraft above all else (space-, cyber-, missile-warfare, etc.), i.e., an air force that is unwilling to evolve beyond flying planes.

Dealing with RPV pilots will probably be a little more difficult. The conventional wisdom is that pilots don’t like RPVs because they take the human out of the sky and stick them on the ground, what Thomas Ehrhard calls the “white scarf syndrome” (in homage to the scarves worn by World War I and interwar aviators).

The reason RPV projects fail, the syndrome claims, is that the Air Force starves them to avoid competition with its manned aircraft (source).

How that fits in the comment about the A-10 and close air support aircraft, I don't know.

The term refers to WWI pilots who wore white scarves—the tradition carried on beyond WWI. In WWI the silk scarves had a purpose: it's smooth so it does not chafe the skin when looking around, it keeps the pilot warm in the open-cockpit, and it's used in cleaning the oil and rain off the goggles—bright colors are good since you know which part is clean and thus can be used (source).

That's also why Snoopy is stylized with a scarf. 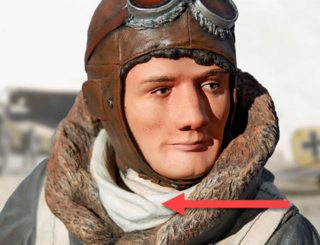 Although in the past the dominant operational perspective was centered on a specific system or aircraft type (bombers or fighters), the future will need to be centered on a capability not necessarily connected to a specific airplane type of mission (i.e., to be centered on synergistic-operations). This transition will be difficult in that the very nature of the Air Force has always been to focus on flying aircraft. However, as history has shown and as technology has advanced, the need for and appropriateness of manned flight as the primary USAF focus has diminished.

As a service, we have rightfully transitioned to thinking about cont rolling “domains” rather than the toys used to control them. Those in the USAF unable to separate themselves from their flying machines will eventually become relics and will he replaced by a new generation of “airmen” whose understanding regarding the depth and breadth of airpower goes well beyond aircraft and instead focuses on how best to advantage war-fighting domains (air, space, cyber). However, as Builder suggests,

as the Air Force is compelled in the near future to reduce its force structure under the pressure of budget reductions, there will be a strong tendency to preserve those forces which have dominated the mission spectrum in the past rather than those which might dominate in the future. To be explicit, there will be a natural tendency to preserve the fighter and bomber forces at the expense of the supporting forces . . . this tension between institutional proclivities and perceptions of the future illustrates the importance of the latter to the evolution of air power theory.

In this regard, the greatest challenge that the USAF must overcome is its inability to focus on the ends rather than on the means. When the USAF finally realizes that it greatest strength comes from its ability to take advantage of all elements within the airpower domain (air, space, and cyber, and not merely on a particular system, that is when the USAF will have obtained a level of maturity capable of sustaining its operations without fear of continual, periodic change. This long-view transition will require the USAF to force itself out of “white scarf syndrome,” where the means (flying aircraft) are more important than the ends of providing the nation with the greatest possible amount of airpower options. Unfortunately, if the USAF continues to rationalize its existence under the pretense of decisive operations, continually strives to prove its independence, and views its primary mission in terms of the aircraft it flies, then its future validity and relevance is questionable.

Not the answer you're looking for? Browse other questions tagged us-air-force aviation-culture or ask your own question.

27
Does the cannon of the A-10 deliver more thrust than the engines do?
5
Is the A-10 Warthog being discontinued?