Let‘s say that you have two identical propellers and each is powered by their own motor and together they produce a thrust of 1 kN. How does the thrust change if instead of operating them side on side I stack them one over/behind the other? I‘m sure they wouldn't still produce 1 kN but how much would it approximately be?

Furthermore, what if I added another propeller of this type and so on?

There's a really interesting paper by Manikandan Ramasamy (Hover Performance Measurements Toward Understanding Aerodynamic Interference in Coaxial, Tandem, and Tilt Rotors, Journal of the American Helicopter Society, Vol. 60, 2015) that talks about this question, which is of great interest for multirotor UAS (which, for rotorcraft, is a substantial number of aircraft): how does stacking two rotor change their efficiency and thrust output?

His test apparatus looked like this: two rotors located exactly one on top of the other, and his apparatus allowed him to measure both torque and thrust produced by each one independently. He could also vary the distance between the two rotors. For reference, the rotors are ~4.3 ft in diameter. Also, just to explain the graphs I'll throw up from his paper, he used blades both with and without twist. 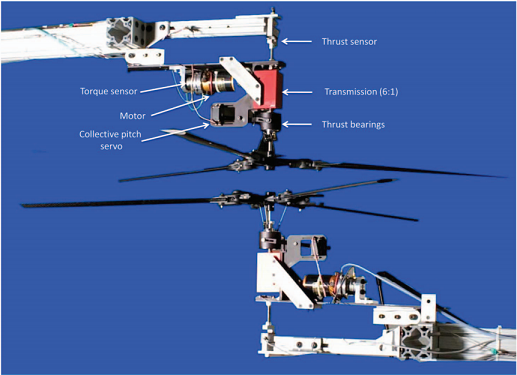 The reason why he has torque sensors is going to come into play with the results. For a coaxial rotor helicopter (not necessarily for a coaxial prop airplane -- I am not sure which you care about), it is desirable to have a coaxial rotor setup wherein each rotor produces the same amount of torque. Multicopter UAS then disturb that torque balance to control themselves in yaw. For the tests Ramasamy performed, they were all done when the rotors were torque balanced, so each rotor produced a torque equal and opposite to the other rotor. 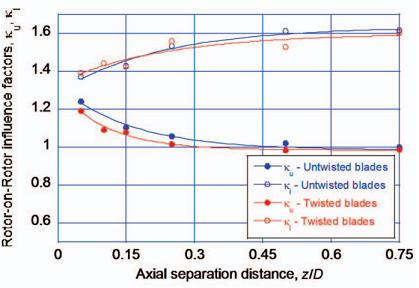 As you see, as the rotors get further apart, the upper rotor acts as if it is all by itself ($\kappa_u=1$). However, the lower rotor is always more inefficient than an isolated rotor due to downwash from the upper rotor. That said, as the two rotors get closer, the effects get a little more wild.

Hence, the first answer to your question is...it depends, but it looks like you actually can get a more thrust out of the coaxial configuration (as opposed to two isolated rotors) if you can space the rotors out well. This is due, at least in part, to some "swirl recovery" performed by the lower, counter-rotating rotor. In other words, since a rotor not only pushes air down but also forces it to spin (like a tornado), the lower, counter-rotating rotor sees faster moving air and can take advantage of this to operate at a lower angle of attack: producing the same amount of thrust with lower drag penalties. However, the effectiveness of this, as said, varies with the separation of the two rotors.

And, again, the larger issue, I think (from a performance perspective) in coaxial setups is not thrust production but power requirements. One of the two rotors (if not both) is always going to be less efficient than an isolated rotor producing the same thrust. This is shown more clearly below in a comparison of Figure of Merit (Fig. of merit = (Idealized power requirement)/(Actual power requirement), so a measure of rotor efficiency) versus coefficient of thrust (analogous to the amount of thrust produced by the rotor) for the rotors with untwisted blades. 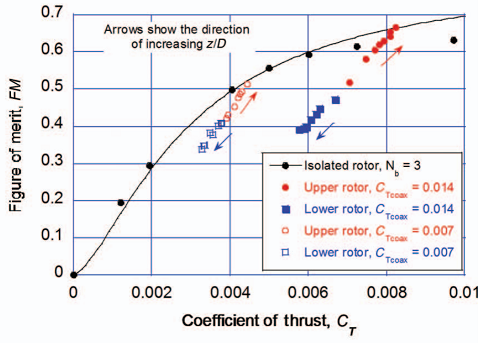 In short, while you can get more thrust out of a pair of coaxial, counter-rotating rotors, there is no free lunch. And the lunch can get pretty expensive, at least from a performance point of view (not to mention the extra structure, etc. required for larger axial separation distances).

Not the answer you're looking for? Browse other questions tagged aircraft-design helicopter propeller quadcopter or ask your own question.

9
Would a coaxial propeller with the second prop slower and larger improve speed?

27
Is there any equation to bind velocity, thrust and power?
9
Which aircraft endure the highest Max Q's (aerodynamic pressure)?
23
Would an aircraft with contra-rotating propellers longer than the plane's wingspan be able to fly?
2
How to calculate optimal prop diameter, pitch, torque and power coefficient given required thrust?
0
Does the direction of rotation of the propeller affect the direction of the thrust generated?
2
Is precession a problem for two-bladed propellers?
11
Is possible to stick two '2-blade' propellers to get multi-blade propeller?