How do the blades on a propeller generate thrust?

I am having trouble understanding how this type of propeller generates thrust: 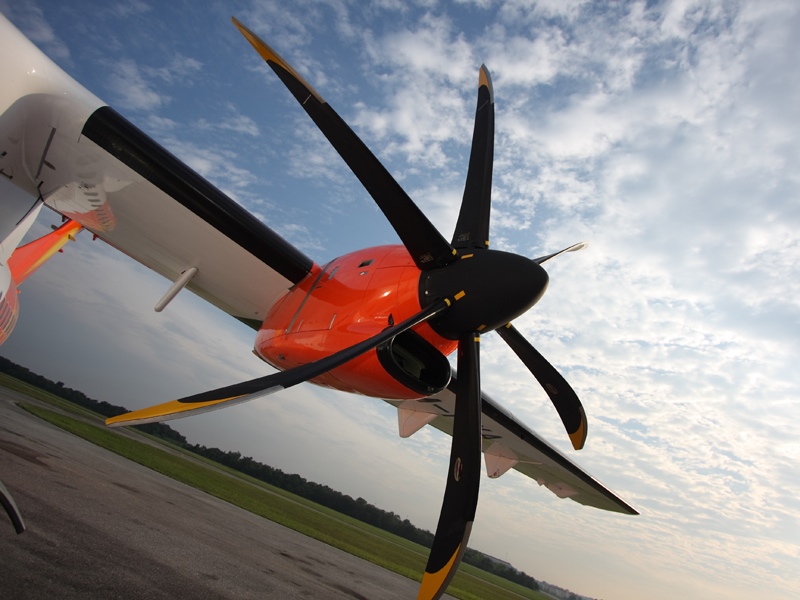 It is so much different than a propeller on a Cessna and thrust would be provided differently. I am also confused of how the turbofan blades in a jet engine provide thrust: 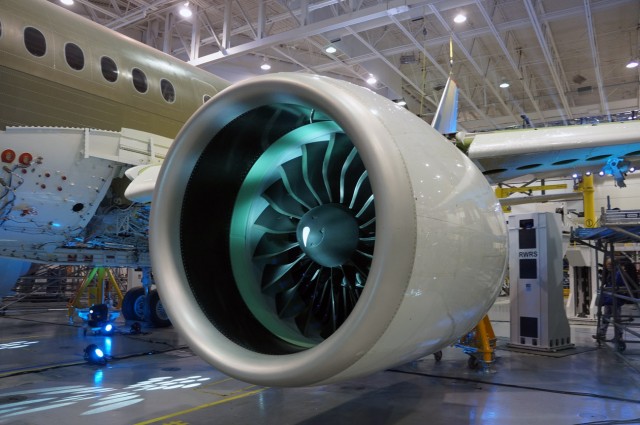 Doesn't the turbofan push the bypass air back really fast providing thrust? How do each of the these propellers (turbo prop and turbofan) produce thrust?

The cross section of propeller blade is an airfoil. As the propeller rotates through the air, it generates lift, which becomes thrust as the it is directed forwards rather than vertically upwards as in aircraft wing. 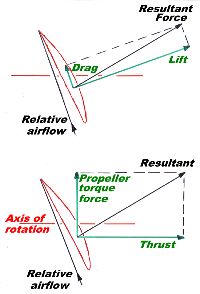 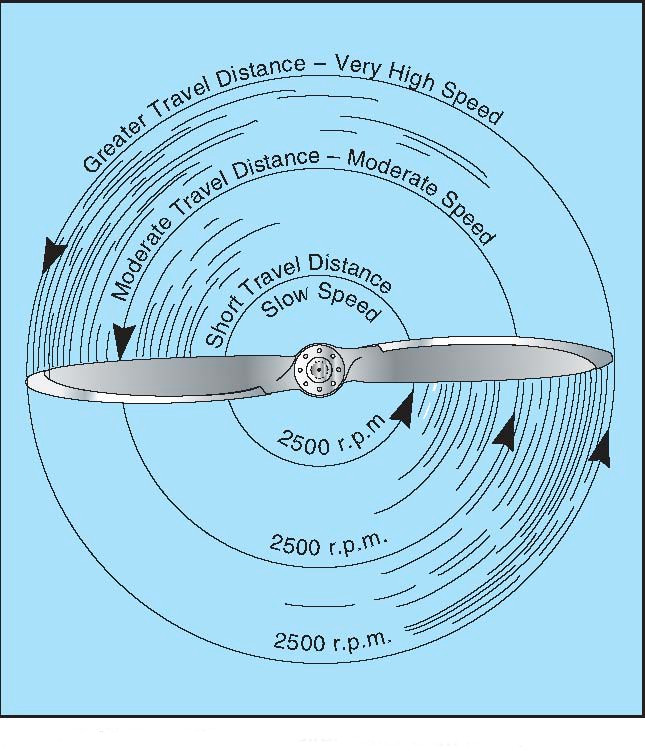 As already noted, the pitch of the propeller blades can be varied in flight. What the photo shows is a feathered propeller i.e. a propeller that is set parallel to the airflow. This is done usually in order to reduce drag in case of engine failure. During normal operation, the blades will not be in feathered position. For example, in the figure below, the propeller of engine 1 feathered while the next one is not. 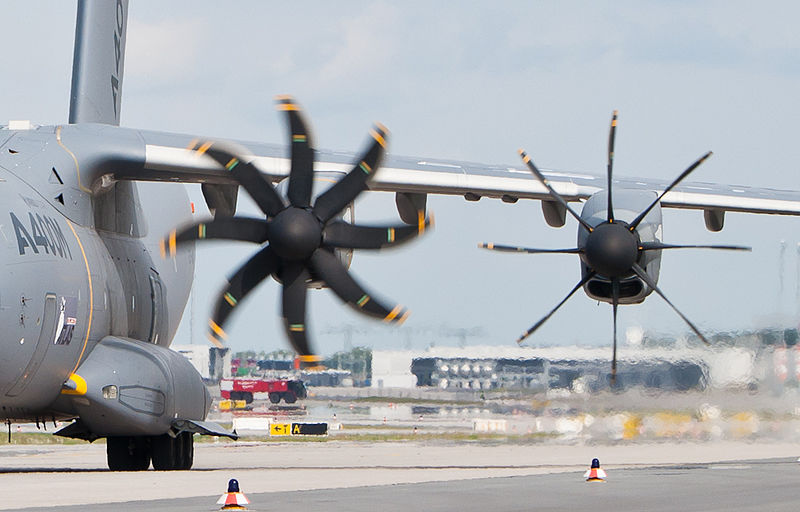 In aircraft, propeller pitch is changed with speed, with fine pitch at low speeds and strong acceleration (like takeoff) and a coarse pitch for high speed (cruise).

In most aircraft, the propeller pitch settings are adjusted automatically by a governor according to requirements. The following figure shows the pitch variation in flight for a similar propeller. 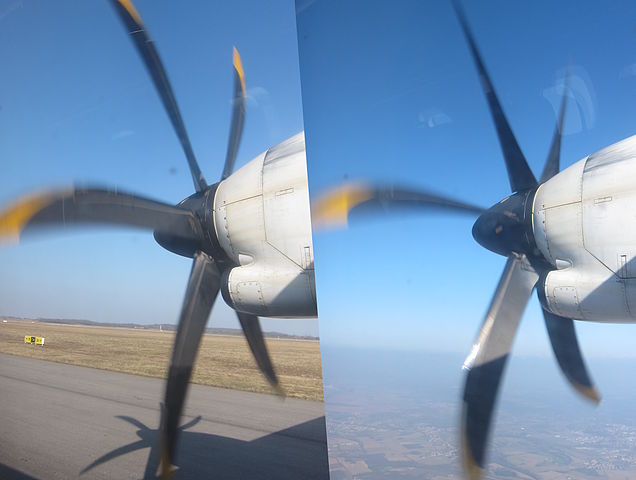 "Propeller pitch on an ATR 72" by Olivier Cleynen - Own work. Licensed under CC BY-SA 3.0 via Wikimedia Commons.

Thrust The thrust in both turboprop and turbofan is provided by accelerating air through fans. In a turboprop, it the propeller, while it is the bypass fan in case of the turbofan.

The thrust produced, T is given by,

where $\dot{m}$ the mass flow rate of air and $v_{f}$ and $v_{0}$ are the final and initial (unaccelerated) velocities of the air respectively. Usually case of propellers, the mass flow rate $\dot {m}$ is higher, while in case of turbofans, the variation in velocity is comparatively higher.

The picture of the turboprop is probably confusing you because you are looking at a shutdown engine. For a multi-engine propeller airplane a desirable feature is that the propeller with auto-feather when shutdown, so that an in-flight engine failure will cause the prop to be in a minimal drag configuration. This minimal lift, minimal drag configuration is what you posted, and this is not producing thrust. When the engine is started and system pressure (oil, hydraulic, whatever controls the adjustable pitch prop for that particular engine) will drive the propellor pitch angle into lift-producing regimes. Turboprops also typically feature "Beta" propellor pitch, which allows the propellor pitch to be adjustable past zero-lift into negative-lift and is used for landing rollout and (in some airplanes, perhaps not many) slowing down in-flight or steep descents. During normal flight the turboprop propellor is producing lift just like the propeller on the cessna you are familiar with.

The N1 fan in a turbofan (the big one you see when you look at the front of the engine) is a ducted fan. The individual blades of the N1 fan are angled to push air backwards. This works the same way as a big box fan you can buy at walmart. The key difference is the N1 fan rotates an order of magnitude faster than a box fan. The bypass air is accelerated by this fan and exits through the rear of the engine to produce thrust.

3
How is thrust generated by a propeller?
-7
How do the propeller blades accelerate air resulting in thrust to push an aircraft forward?

12
Can noise from contra-rotating propellers be reduced by having a different number of blades on each propeller?
30
How does a fan differ from a propeller?
11
Are ducted fans more efficient?
4
Why doesn't the plane accelerate/move forward when it's at rest, if the propeller is spinning?
6
Guidelines for using a constant speed/adjustable pitch propeller
3
On a ducted propeller, how does duct length affect thrust?
1
How do you maximize an electric engine's thrust?
4
Why aren't large, low-speed propellers widely used?