this is my first post here, so bear with me if this isn't the right place. I'm coming here from Stack Overflow, and this seemed to be the most relevant Stack Exchange for my question.

So, I'm building a multicopter (quadcopter, preferably, due to it's relatively simple design) on a scale that's more-or-less never been done before. I've decided to funnel all the money I made over the summer into this project, and I've just begun the planning stage.

I've worked out that I need about 2500 Newtons of thrust: enough to move 180 kilograms (about 80kg for the person and 100kg for the electronics, maybe more) at a rate of ~4.5 m/s^2 more than standardized gravity—13.888 m/s^2 in total, to be specific. I'd need approximately 750 Newtons of maximum force on each rotor, as my experience with building and coding (from scratch) an Arduino flight controller has taught me that the upper motors often need to work much harder during x and z movement than they would during standard y elevation.

I struggle to continue from this point. I haven't the slightest idea as to how to pick a prop design that is most efficient for this project. My question for Aviation is this:

Given a required maximum sustainable thrust of 750 Newtons, a mass of about 180kg, and the assumption that maximum velocity of the craft is slow enough that air resistance and other drag is pretty much irrelevant...

I wouldn't be surprised if your first thought was something along the lines of "this is ridiculous." Some may even suspect me of being a troll. I can assure you, I am highly committed to this project. My flight controller is insanely stable, and I believe it would be worthwhile to test its abilities on a build that is more heavy, powerful, and top-heavy than most multirotors ever built.

Could you guys point me in the right direction? 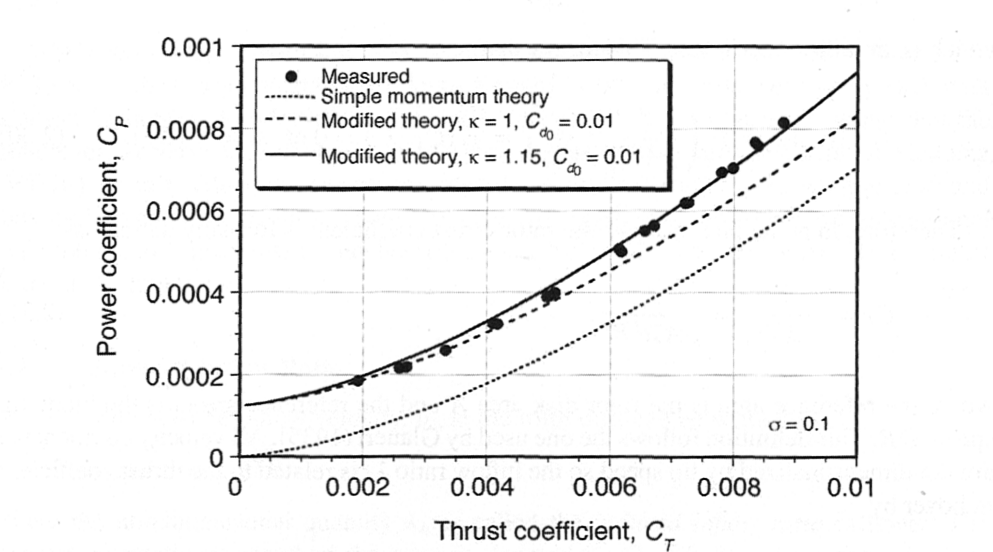 We need 15 times this thrust! In order to verify the value of $C_T$ there is another graph in Leishman that relates $C_T$ with blade-pitch angle. It turns out that $\sigma$ = 0.01 is at a blade-pitch angle of about 12 degrees, we cannot go much higher than that. Neither can we increase tip speed, our only choice is disk area. 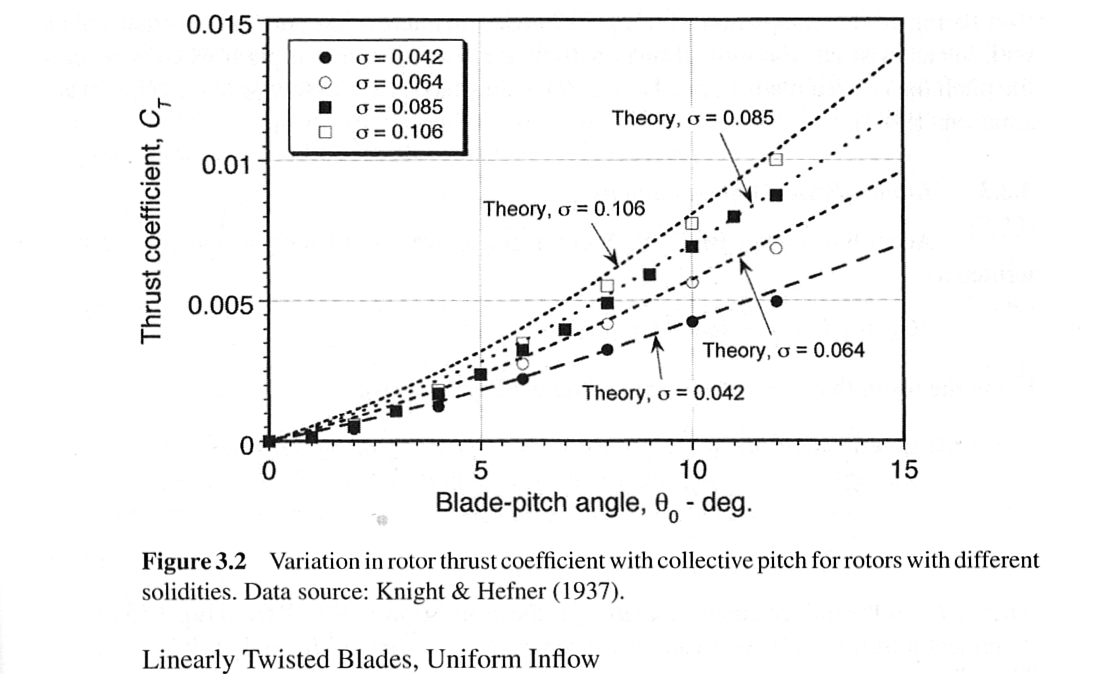 Not the answer you're looking for? Browse other questions tagged helicopter multi-engine quadcopter or ask your own question.

5
What is the highest possible thrust generated by 15cm ducted fan?
3
What is the equation for calculating static thrust?
1
Will Thrust on Rotor (Main) increase with altitude?

16
How to calculate the required motor power and rotor size with respect to the weight of quadcopter?
3
How can this single-prop drone maintain stable (rotating) attitude and position?
4
Could a tilt quadcopter use turbofan engines?
8
Does the DC-3 have a prop sync?
1
How can I calculate the thrust of a fan given the diameter of the blade?
8
What are the failure mode(s) for flying cars in case of power loss?
9
Why is ground effect greater over smooth hard surfaces?
3
Do ducted fans have a future in forward flight aircraft? Can they be made more efficient than open rotors?