What is the effect of Mach number on efficiency, thrust and specific fuel consumption of a ramjet engine?

My graphs show that overall efficiency and thrust first increase, reach a peak and then fall in the supersonic range (M=1-5) whereas SFC first drops and then increases rapidly near M 5.

Why does this happen?

The thrust of a ramjet depends on the dynamic pressure of the airframe since this determines how high the pressure inside the ramjet can become. Thrust grows therefore initially with the square of speed.

The efficiency of heat engines depends on the temperature and pressure ratio of their cycle, and again speed helps to improve that. The specific thermodynamic process of ramjets is the Joule cycle (in the US called Brayton cycle).

Why this doesn't grow indefinitely has to do with nonlinearities at high temperature. Once gas temperatures exceed 2000 to 4000K, Oxygen starts to dissociate, depending on pressure. Nitrogen follows beyond 8000K. Now the combustion heat will not be converted into a further temperature increase but will be wasted in the dissociation of air. As this limit is approached, less margin for heating is left and the SFC drops. The optimum with current technology is at approximately Mach 2.4.

A possible remedy is to slow down the air less, so the maximum heat inside the combustion chamber can be restricted. However, the flame propagation speed of conventional hydrocarbons puts a firm and low limit to that. The higher speed simply means that mixing, evaporation and burning will happen mostly once the air-fuel mixture has left the engine. Here you need to switch to hydrogen and a supersonic ram jet, but that will bring a host of new problems.

For a given fuel, ramjet thrust vs mach number trend may be approximately(see note 1) given by 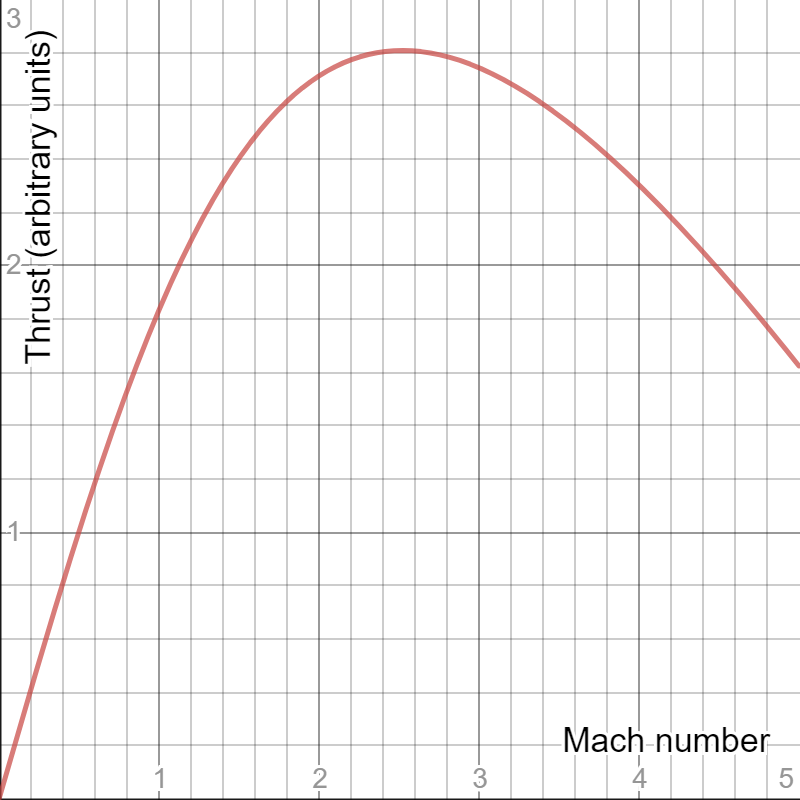 If we maintain a given air/fuel ratio, the amount of fuel consumed goes up linearly with mach, as air flow rate goes up with the same trend. 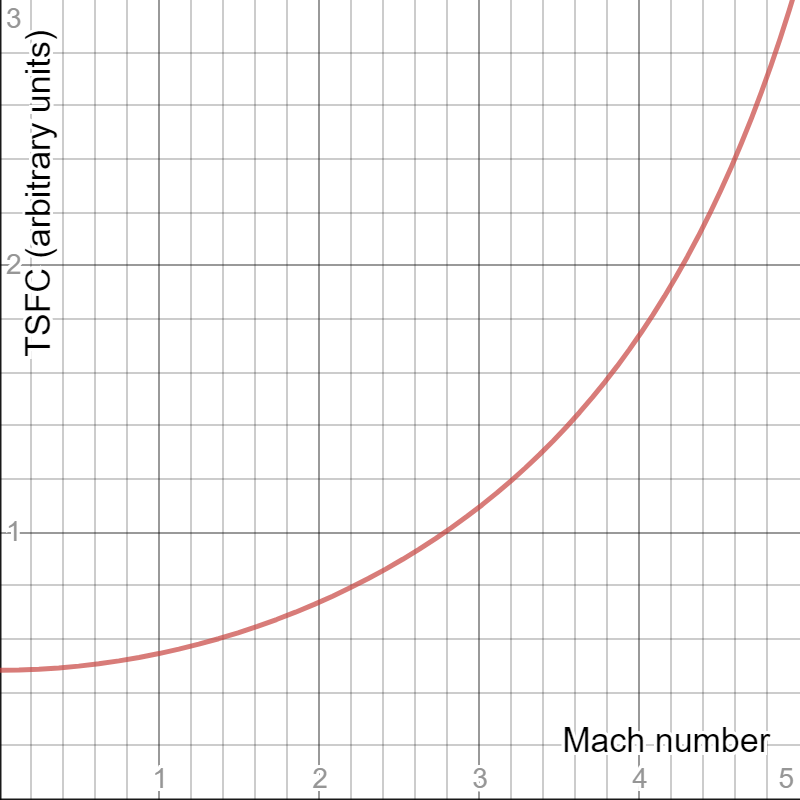 Note 1: The source's equation was simplified and some values rounded off to give the current equation.

Not the answer you're looking for? Browse other questions tagged aircraft-performance supersonic ramjet scramjet or ask your own question.

67
Why do jet engines get better fuel efficiency at high altitudes?
7
How is flame stabilisation carried out?
2
Is a flying wing optimal for high altitude craft?
2
Is there a viable alternative to liquid hydrogen as a fuel for scramjets?
0
About ramjet efficiency in supersonic speed. Is there an optimal speed?

3
Why does thrust-to-weight ratio depend from max Mach number?
1
How to calculate the fuel flow using the thrust specific fuel consumption?
4
Why does the aspect ratio of a wing become less important at supersonic speeds?
2
At what Mach Number do variable cycle engines (VCEs) start showing benefits over turbofans?
11
How (and why) does engine thrust change with airspeed?
2
Why does IAS decrease with lower air density if power is constant?
0
About ramjet efficiency in supersonic speed. Is there an optimal speed?
8
Why do propellers have less theoretical range (i.e. range ignoring impatient passengers wanting to go fast) than jets, despite greater efficiency?
2
How does altitude affect the TAS and thrust of an electric fan powered aircraft?
3
What happens to Vyse and Vxse above the OEI ceiling?