Why does thrust-to-weight ratio depend from max Mach number?

Disclaimer: I have no copy of Raymer's book, so I have to guess what this table looks like.

There should be no direct dependency, except that all aircraft need to operate in the real world. If you look at the wing loading of regular jet transports, you will notice that they bunch together around 500 - 600 kg/m². This is the maximum wing loading which still allows them to operate from normal airports - go to higher values an you need a dry lakebed for take-offs and especially landings.

To push the resulting wing to higher flight speeds needs more thrust - hence the dependency. If you start with a higher wing loading (say, 800 kg/m²), the thrust/weight ratio for reaching the same Mach number is lower. The approach and landing speeds grow with wing loading as well, which in turn affects the resulting landing distance. I guess there is a maximum landing distance requirement for all aircraft in the table which is not explicitly mentioned.

In a short answer: In practice Mmax and Thrust to weight ratio are not correlated because other factors are more important, but in theory there is some dependency. The answer depends if you're trying to compare planes, in which case you're looking at correlations among dozens of performance parameters and trying to fit estimates into simple equations. Or you could be designing a plane, in which case you'd run equations to make sure the plane has enough thrust to meet the target Mmo. The case presented by Raymer seems to be a mix of the two. He's using industry data to predict necessary T/W early in the design process.

The most confusing part here is that normally we think of thrust working against drag to provide acceleration, yet here we're talking about steady-state speed, not acceleration. The catch here is that drag is not constant as speed increases. As you accelerate you reach a point where drag becomes strong enough to counteract the maximum engine thrust, and you can't go any faster in level flight (see the first graph [source])). 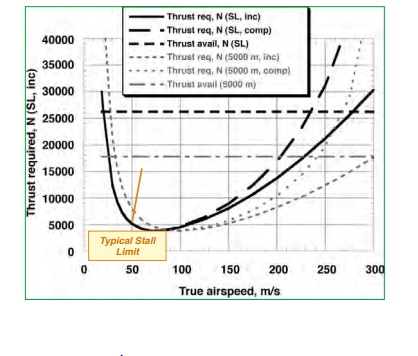 However, you'll notice that there are other parameters in this formula besides thrust to weight ratio like wing loading and drag coefficient. In practice these are not trivial considerations, especially when comparing different planes. Raymer himself notes "Later in the design process, aerodynamics calculation of drag at the design maximum speeds will be used, with other criteria, to establish the required T/W." There are also factors this formula doesn't consider like the variation in thrust as speed changes. These are the reasons thrust to weight ratio and maximum speed are not correlated when comparing different planes.

Let's see if this relationship actually holds out when comparing different planes. What real-world perfomance parameter should we reference for Vmax? Mmo, high speed cruise TAS, or something else? Technically speaking, Mmo is the certified max operational speed and is a safety limit, not just a performance limit. During descents you can pick up energy very quickly and exceed the maximum level flight speed and Mmo. However, in practice (for business jets at least) the Mmo, high speed cruise TAS, and maximum level flight speeds are correlated. After all, you don't design many planes for their diving performance and many jets are designed to cruise close to their Mmo.

The truth is that none of these speeds is closely correlated with thrust/weight when comparing jets. In my data set of 31 business jets from "Business Jets 2012", the correlation between thrust to weight and Mmo has a pitiful R-squared value of 0.20 (see the second graph). I'm not sure what data Raymer was using and if anyone has better data for showing a trend let me know. I should note that once we account for the effects of wing-loading, there is a weak relationship between thrust to weight ratio and maximum speed. So the effect of thrust/weight on Mmax in the above equation is very weak but present (see the third graph). 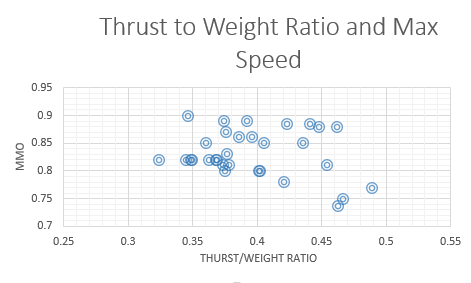 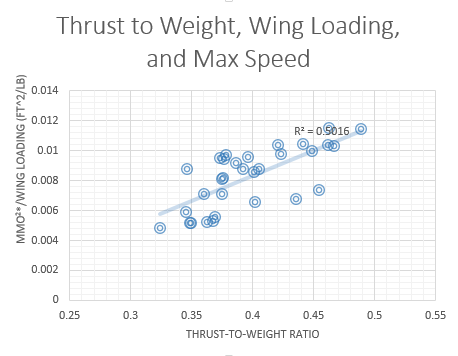 There are a lot of parameters that loosely correlate with Mmo besides thrust, including aircraft type, cruise altitude, wing loading, and range. These parameters need to be engineered in conjunction to make sure the airplane meets all the performance expectations. Mmo may be reduced or increased so that one of these parameters reaches its target and vice versa.

In theory, there is a correlation, but I have to say my stats don't agree with Raymer's on the variables being "closely related" when comparing different jets. Other variables like drag and wing loading are too important to be neglected.

9
Which aircraft endure the highest Max Q's (aerodynamic pressure)?
16
Why would maximum fly-time (endurance) not coincide with max L/D operating point?
3
What's the definition and the meaning of “soft dirt runway”?
6
In Raymer diagram "Take off parameter- Take off distance", what is the difference among "balanced field length", "over 50 ft", "ground roll"?
6
Does a high "wing loading" require a high approach speed or does it cause a high approach speed?
0
How would one calculate the thrust-to-weight ratio for a minimum turn radius?
3
How does Mach number of Jet engine vary with respect to Compression Ratio?
8
How much horsepower to weight is required for a 1:1 thrust ratio?
0
What thrust is used for thrust to weight ratio?