What exactly is the pressure thrust component and why does it exist?

I'm teaching PowerPlants on a ATPL theory course and honestly have some trouble wrapping my head around this one:

Most literature describes the term "pressure thrust" – as opposed to "momentum thrust" – by explaining that during high thrust conditions in a choked exhaust, the exhaust gas reaches the speed of sound and cannot be accelerated further and thus the static pressure of the gas increases beyond atmospheric pressure, this pressure thrust is added to the momentum thrust to make up the total thrust.

Firstly – it is well known that exhaust gas velocities of aircraft can easily go supersonic, take a fighter jet for example... why is this a restriction in per say turbofan engines?

Secondly – it is often emphasized in training material that you should avoid thinking of thrust as acting on / pushing on the ambient air behind the engine, as opposed to thinking in terms of Newton's 3rd law... but isn't that exactly what pressure thrust is? It's defined by pressure $\times$ the area that it is acting on...

Indeed, exhaust gases can be expanded beyond Mach 1, and doing so will result in higher thrust from higher propulsion efficiency. The problem is that pressurised gas is expanded by constricting the cross-section area when lower than M1, and expanding it when higher than M1.

So in order to achieve full expansion to ambient pressure $p_0$ at supersonic exhaust speed, we need a cross-section that narrows, then expands, for all flight circumstances. The figure below illustrates how this is done in supersonic fighter jets: with an ejector jet exhaust. 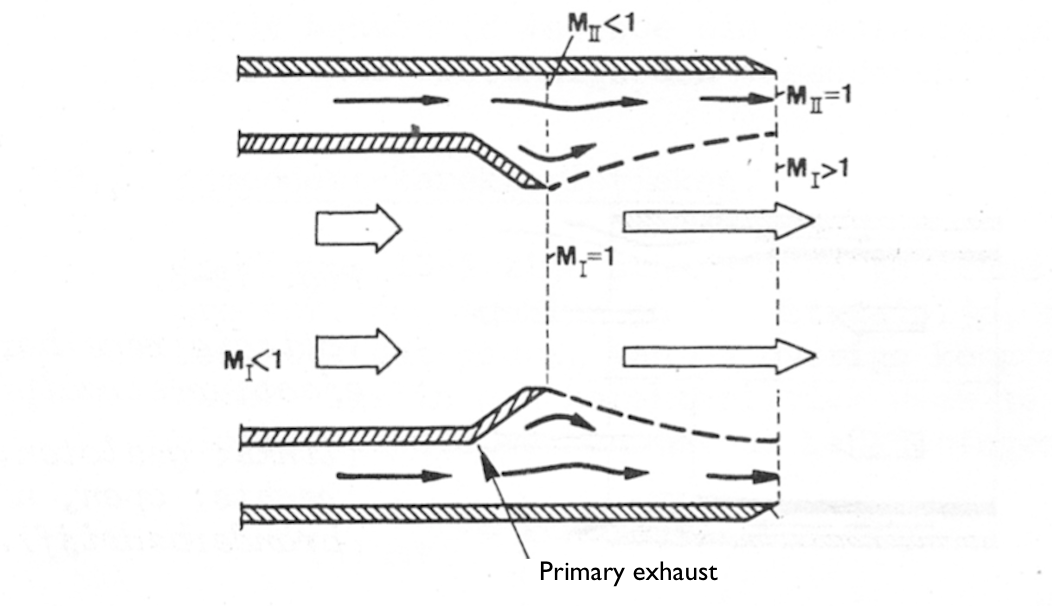 The primary exhaust is mounted inside a pipe, and the expanding exhaust gas sucks in a secondary flow, which dampens the primary flow expansion so that it takes place gradually. The secondary flow can be considered as the diverging part of the exhaust, and protects the actual metal exhaust from afterburner heat. In supersonic fighter jets both the primary and secondary exhausts are adjustable: pic left for subsonic speed, right for supersonic speed.

So full expansion is possible yet complicated, with the necessity of constantly varying exhaust nozzles.

Firstly – it is well known that exhaust gas velocities of aircraft can easily go supersonic, take a fighter jet for example... why is this a restriction in per say turbofan engines?

Because the turbofan's main flow is through the fan, which is only a compressor, no combustion takes place in this flow. In most circumstances the bypass flow is fully expanded at sub-sonic speeds - if it would not be the case, constructing in total four concentric regulated exhaust nozzles like in the pic above would be complicated and heavy, for very limited gain. Only above M1.5 will there be a significant thrust gain from full supersonic expansion.

Secondly – it is often emphasized in training material that you should avoid thinking of thrust as acting on / pushing on the ambient air behind the engine, as opposed to thinking in terms of Newton's 3rd law... but isn't that exactly what pressure thrust is? It's defined by pressure × the area that it is acting on...

Whether flying supersonic or subsonic, a jet engine's intake, compressor, and diffuser, all slow down the air to slow subsonic velocity so combustion can take place. When the temperature rises sharply, part of this energy is converted to velocity.

Because of the high combustion temperature, the speed of sound is much higher, so the mass flow on its way to the nozzle is subsonic; cool right? In subsonic flow, as air is squeezed, it speeds up, and its pressure drops.

Turbofan nozzles in jetliners (co-annular) do not even do that, purposefully for efficiency reasons – the closer the exhaust velocity is to the free stream, the more efficient the propulsion is. Also, see: Wikipedia: Propulsive efficiency § Jet engines

Because of the varying operating conditions in the fixed nozzles in rockets, "pressure thrust" is needed for the thrust equation, along with the change in momentum – it's not one or the other, it's only that the pressure thrust is negligible for turbine engines:

The nozzle of a turbine engine is usually designed to make the exit pressure equal to free stream. In that case, the pressure-area term in the general equation is equal to zero.

The first part of the question addresses how to accelerate a flow in ducts to supersonic speeds. In simple terms, for compressible flow in a pipe with varying diameter:

in order to produce supersonic flow, you need

The cannot be accelerated further part refers to non-divergent nozzles. For supersonic designs, then there's a part about adapting the nozzle - meaning that the nozzle ideally should expand just enough so that the exit static pressure matches the atmospheric ambient, otherwise you get over- or under-expansion with a reduction in efficiency.

As a simplification, we could assume that the differences in pressures before and after the engine - far enough - are negligible, and then only the differences in momentum (stream velocity * density) provide the thrust. But if the pressure differences are large enough, this cannot be neglected any more.

The mathematical formulation gets a bit involved, then... but you can see the pressure terms.

Not the answer you're looking for? Browse other questions tagged jet-engine supersonic thrust or ask your own question.

18
What's that component between the engine and wing?
4
Why does lower atmospheric pressure produce higher EPR (thrust)?
2
What is a "flare-out" and why does auto-thrust reduce thrust during flare-out?
12
How (and why) does engine thrust change with airspeed?
3
Why does the thrust limit page display the thrust in percentage (« % ») and not in pound-force?
1
What is the thrust balance between compressor and exhaust nozzle for a turbojet engine?
1
Why would sea level static thrust have a takeoff and a maximum continuous value?