Why does the aspect ratio of a wing become less important at supersonic speeds?

My understanding is that an increase in the aspect ratio (AR) of a supersonic wing won't increase the efficiency like it would for a subsonic wing.

They're both proportional to $\frac{1}{AR}$ so why is the aspect ratio considered insignificant at supersonic speeds? ------> It seems like I'm missing something here.

*Does this term only apply things like fuselages and nacelles and not wings? If so, what does it mean for it to have an aspect ratio?

The two main reasons for wings with a subsonic leading edge are:

Your observation is correct: The lift-related drag coefficient is proportional to the inverse of the aspect ratio, regardless of flight regime for slender bodies. In all cases, lift is created by accelerating air downwards, and efficiency is better when more air can be accelerated by less.

Even at the highest supersonic cruise lift coefficient, the approximated lift-dependent drag coefficient is only 4.3% of what it is at landing speed. Supersonic drag is dominated by pressure and friction, and the cost of lift creation is dwarfed by the other sources of drag. Or let's look at another aircraft designed for sustained supersonic flight, or more specific, it's flight envelope (source): 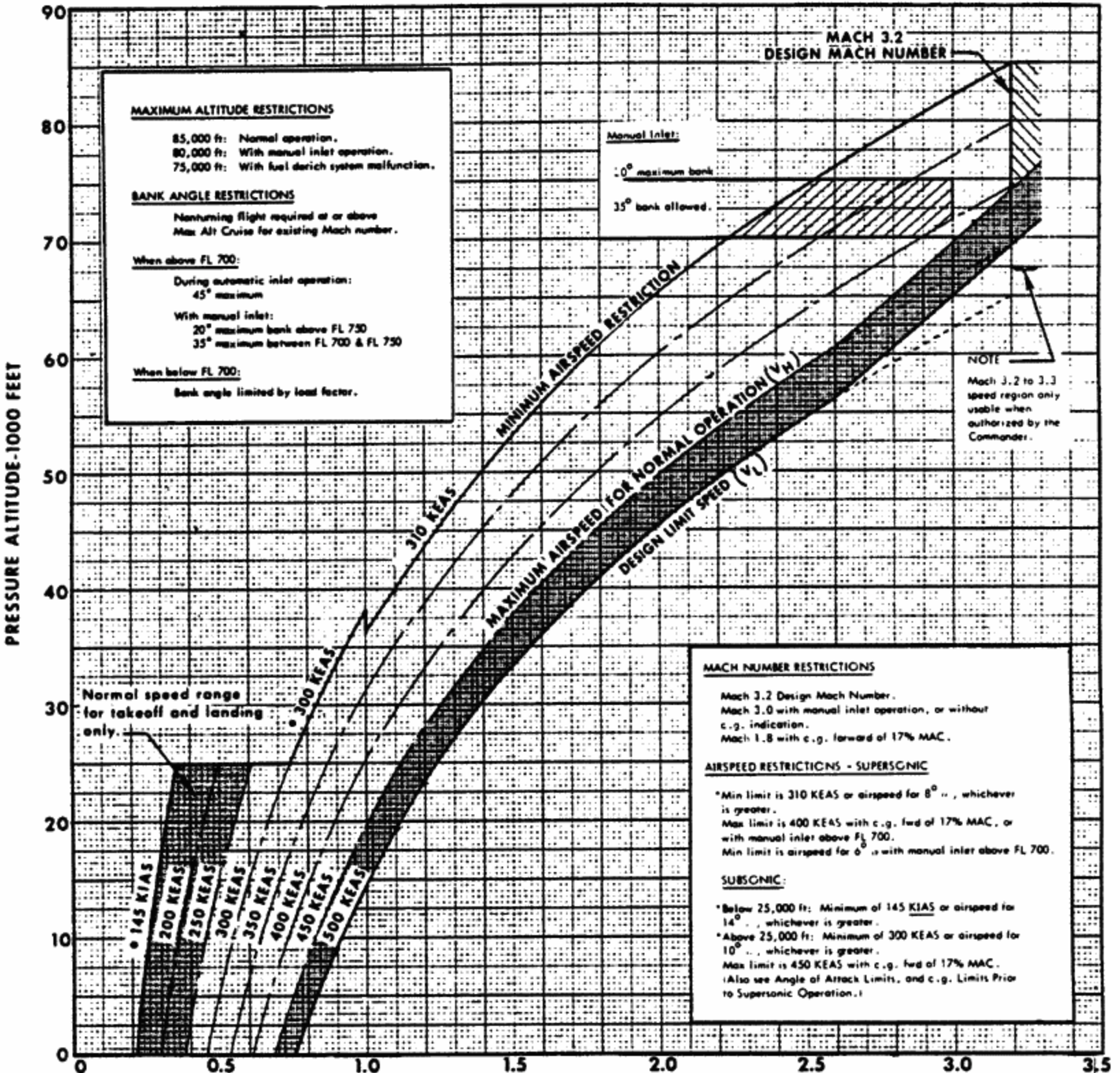 The aircraft operates in a narrow band of dynamic pressures, trading density for speed to stay within a corridor of 310 KIAS to 450 KIAS when flying at supersonic speed. Here the lift coefficient is roughly between 0.1 and 0.3 (depending on aircraft mass and load factor) and again much lower than at low speed, where minimum speed drops to 145 KIAS.

Note that the lift wave drag formula for slender bodies is only strictly true for $AR$ approaching zero. At higher aspect ratios and especially with a supersonic leading edge this relationship is diminished. In supersonic flow the aspect ratio only comes into play by influencing the part of the wing that is within the Mach cone of the wingtip. In other words: The supersonic flow around a slender body is everywhere influenced by tip effects, whereas the inner and forward part of a higher aspect ratio wing experiences two-dimensional flow, being blissfully unaware of lateral limitations to wingspan.

Now to the structural factor: Wave drag has two components, one from lift and the other from the displacement effect. Pushing air out of the way at supersonic speed must be avoided as much as possible, because it is doubly punished: Surfaces facing in flight direction experience higher pressure than ambient, and those facing backwards experience lower pressure (i.e. suction). In all, zero-lift wave drag increases with the square of the thickness ratio, so there is no space in supersonic wings for the beefy spar a high aspect ratio wing would require.

Not the answer you're looking for? Browse other questions tagged aerodynamics wing supersonic drag aircraft-structures or ask your own question.

14
Why is the coefficient of drag for straight wings at supersonic speeds lower than for swept wings?
6
Why is induced drag less on a high span wing?
4
Does lift-to-drag vary with anything beyond geometry?

8
How can the glide ratio in a balanced turn be estimated?
10
What is the maximum theoretical lift of a plane as a function of engine power and surface of the wings?
5
Is the induced drag independent of wing span?
3
How can the zero-lift drag coefficient (parasitic drag) be calculated?
2
What is formula for induced drag in stalling regime?
1
How does wing aspect ratio influence lift and drag?
5
How does a weak shock-wave boundary-layer interaction create wave drag (other than through direct shock losses)?
7
What are the relative contributions of the body and wings to missile lift?
0
What is the 'optimal' taper ratio?
2
Explained intuitively, why does aspect ratio affect induced drag?