What is "50 ft obstacle climbing speed"?

Vy and Vx make sense to me. They are used for fastest height gain at a given time and biggest angle of climb. But what is the purpose of that speed (it's from DA20 POH)? It's only 3 kts faster than Vx. 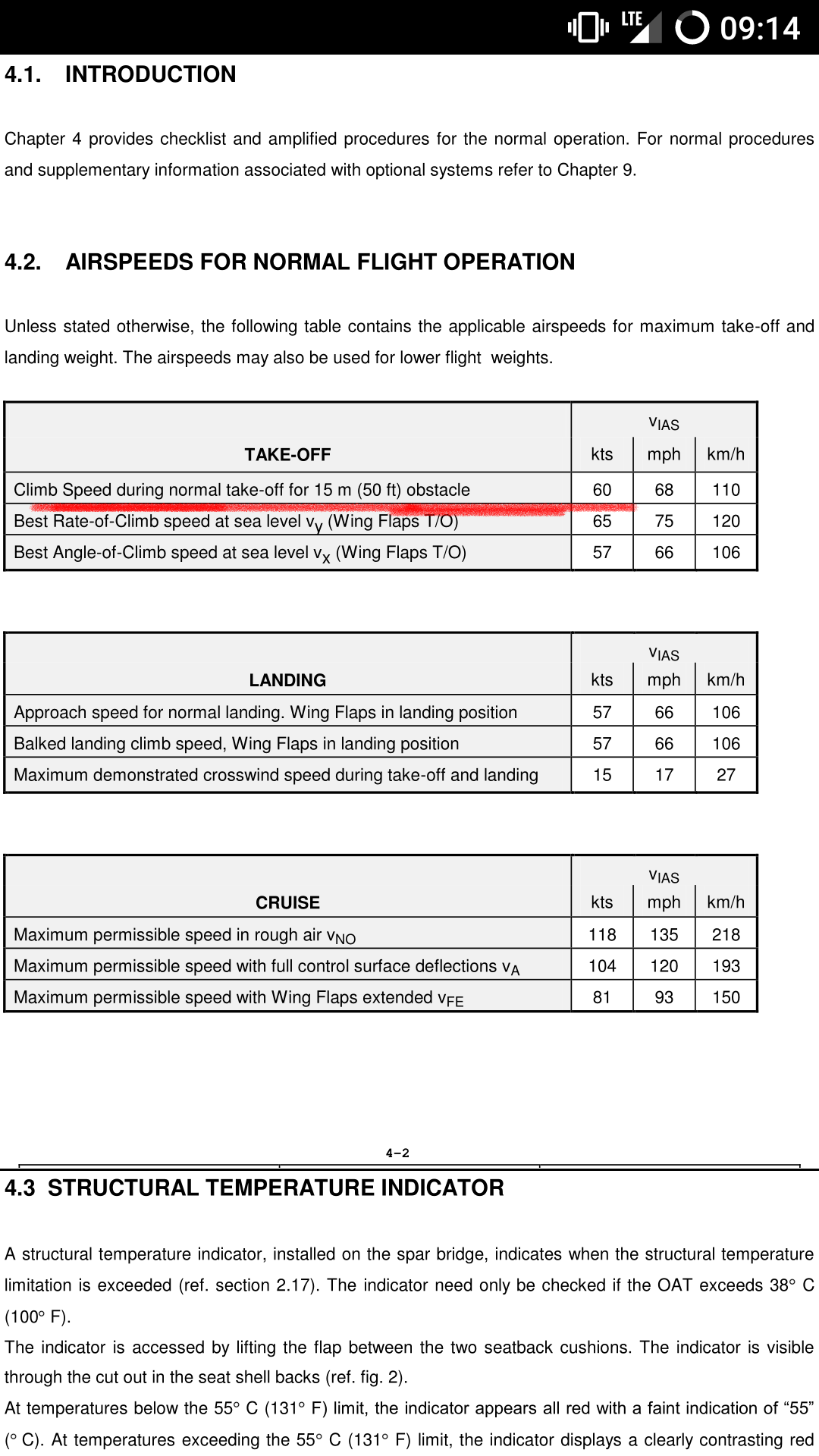 In the absence of POH guidance normally Vx is the target airspeed for a 50ft obstacle. However, when the 50ft speed is included in the POH, as it is in modern aircraft, it is based upon empirical data from flight tests. Essentially, the test pilot flies the plane searching for the best technique to offer the best performance. When that is determined, the procedure and speeds are worked into the POH, usually in procedures and tables of speeds, but sometimes in graphs.

There is allot of engineering and test department spin on the procedures, and sometimes a pilot may get better performance using a slightly different procedure and / or speed, than published.

Also, published speeds may have a buffer in them to avoid significant performance loss, if for example a maneuver puts one close to a point where sink might be higher if the pilot's airspeed control is slightly off.

So to summarize, different manufacturers have different methods of determining what their recommended procedures and speeds are. Sometimes there are buffers built in for speeds, and sometimes not. Sometimes a skilled pilot can outperform the recommended POH procedure. That doesn't happen often, because POH figures are competitive and are used to sell planes.

Side story: I was evaluating a PC-12 and C-208 as platforms for scientific instruments, and flew each one with a sales man. The PC-12 came back with a factory test pilot to fly with me. I wanted to fly at speeds between 61 and 64k, in the Caravan, at 500 ft AGL, and 67 to 70k in the PC-12. The Cessna Caravan would do it comfortably all day long. Neither the salesman nor the factory test pilot was willing to fly (or let me fly) the PC-12 at those speeds at that altitude. I did with the PC-12 at 3500 ft AGL, and it simply didn't have the stability that the Caravan did at the lower envelope.

I am inclined to believe that is a misprint from either an earlier POH or a non-OEM approved flight manual. Here's an excerpt from the current OEM-approved DA-20 POH for the normal operating procedures. 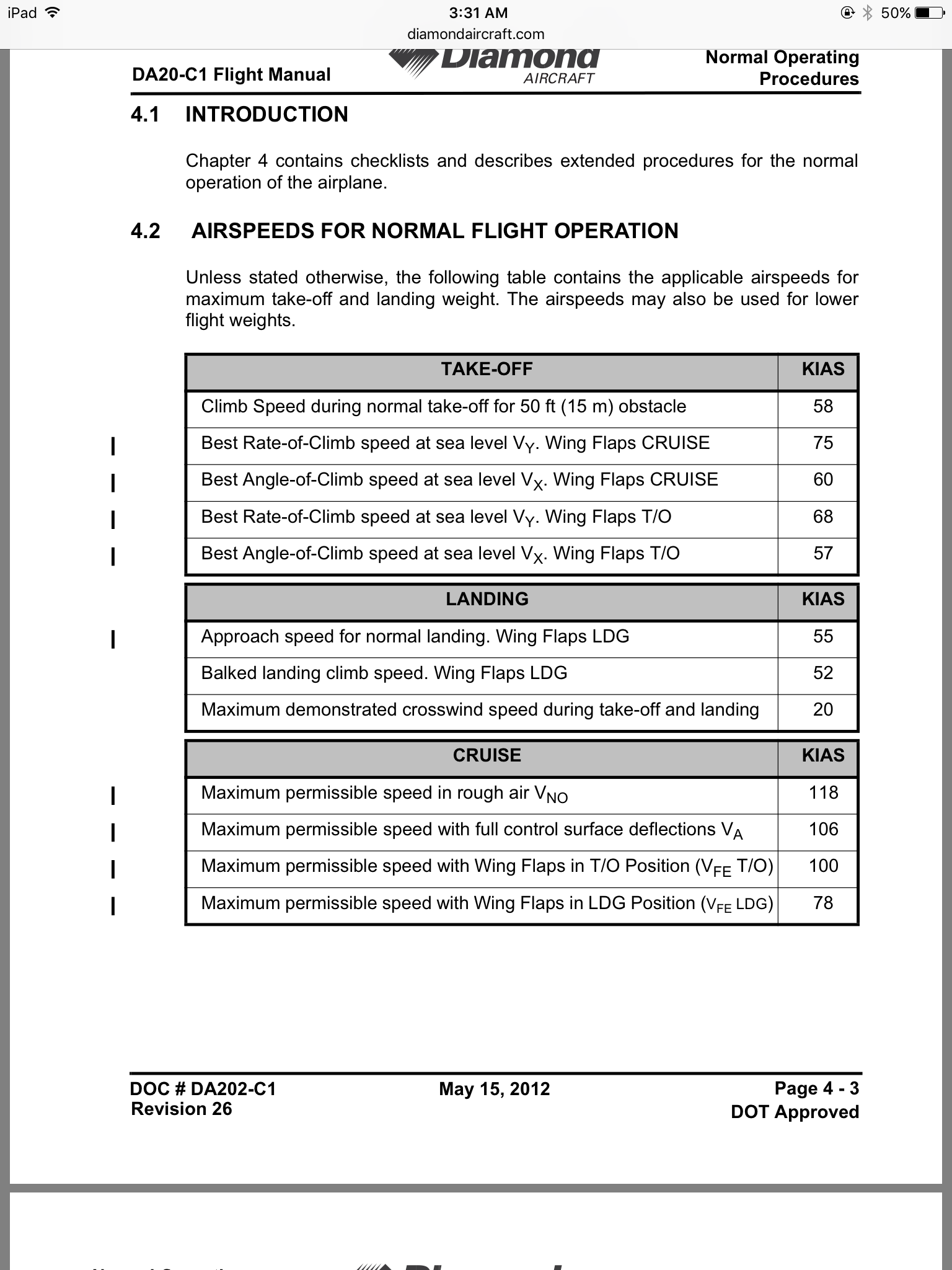 There is an additional supplement to this for the takeoff procedures. 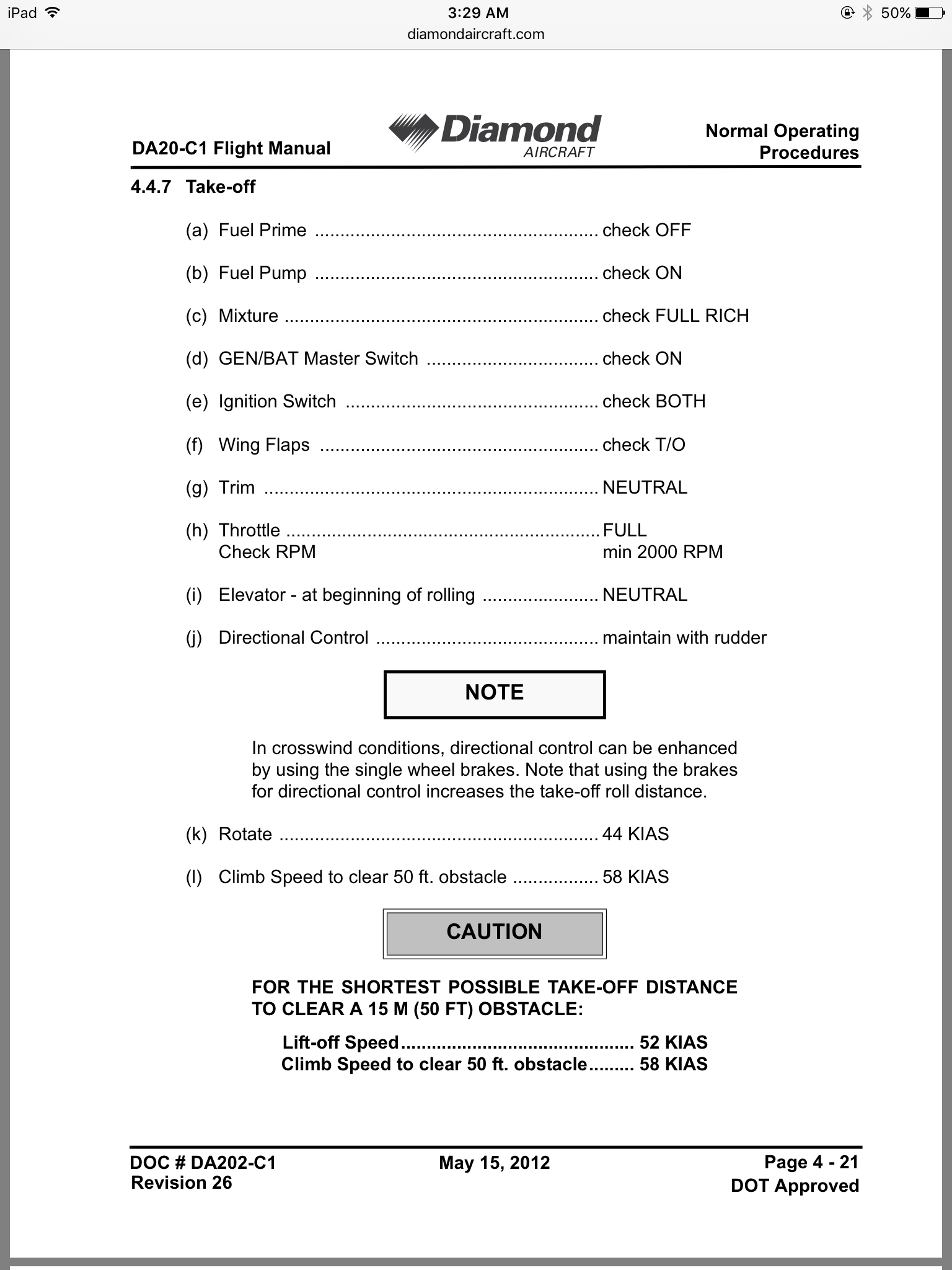 The screenshot you posted seems to indicate a climb speed for a standard takeoff as oppos d to using a short field procedure. However the OEM manual doesn't seem to list anything like that for takeoff roll and obstacle clearing distances. 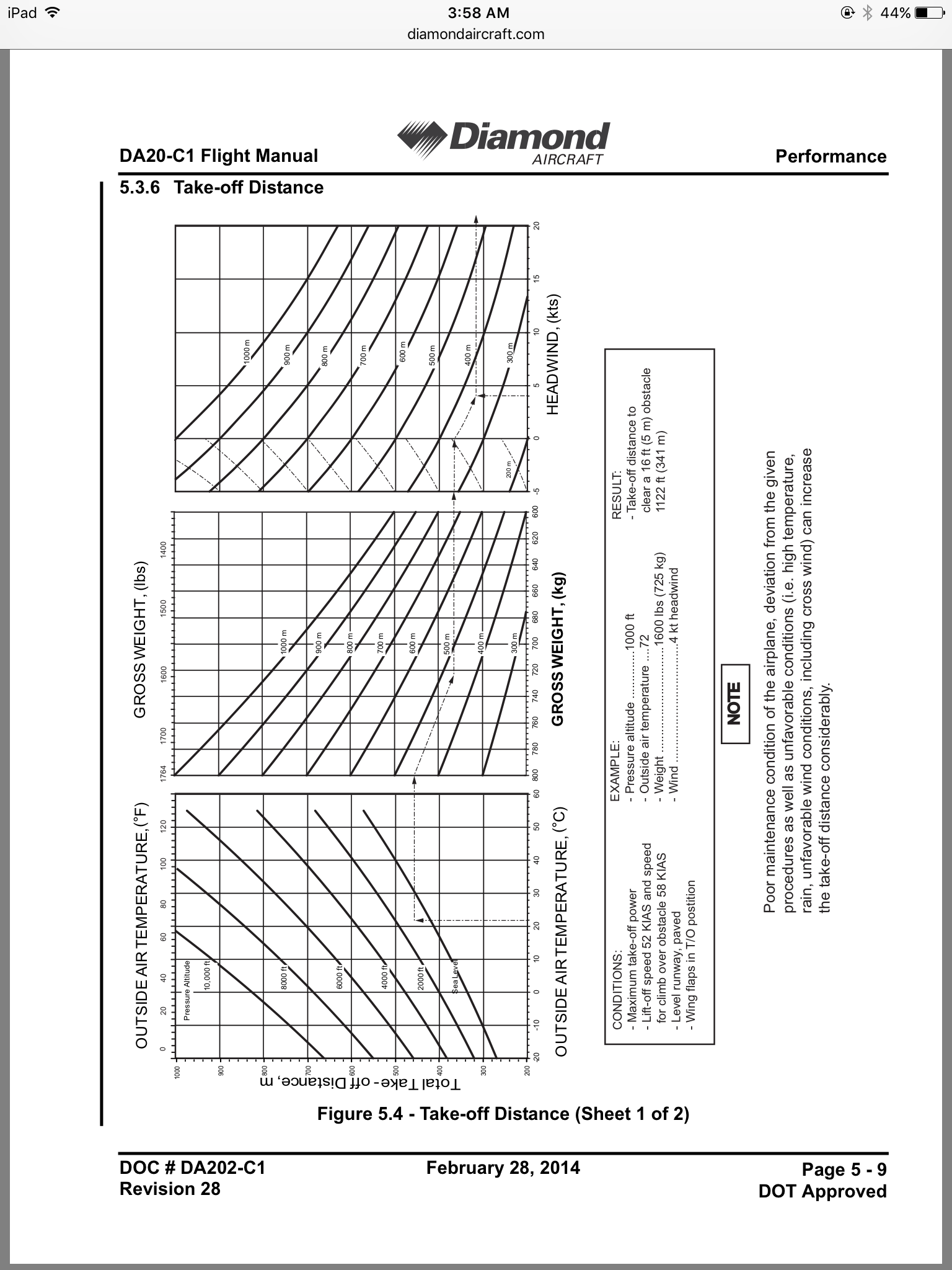 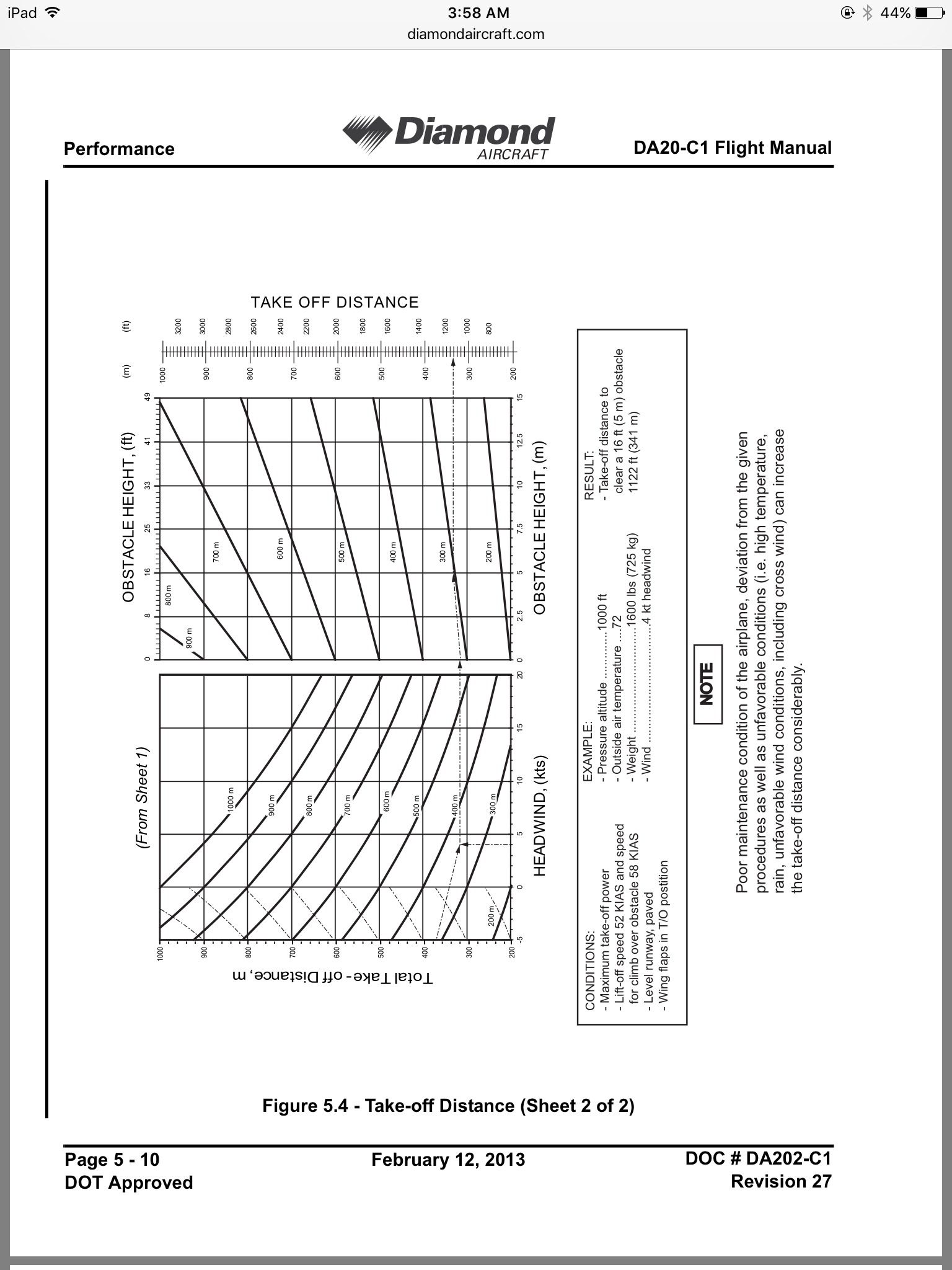 Unless your flight manual indicates some kind of performance chart which makes use of that operational speed, I don't know quite what it's used for.

As always, this data presented here is for informational purposes only; always use the manufacturer approved flight manual, supplemental data and approved cockpit placards specific to the airplane you are operating.

Not the answer you're looking for? Browse other questions tagged aerodynamics climb v-speeds or ask your own question.

14
Does a headwind affect the climb gradient?
4
Why doesn't the flight path angle increase beyond a certain angle even if the angle of attack is increased?
2
Is this calculation for the 'free' climbing speed when flying in a headwind with a gradient correct?
1
How should these translated takeoff and climb settings be interpreted?
1
What determines the maximum speeds for a particular aircraft?
0
What would the altitude profile for a typical airline flight look like?
1
Definition of "Rotation Speed" vs "Lift Off Speed" vs "Fly Off Speed"
3
How does maximum speed vary with altitude?
8
How can best glide speed be lower than best rate of climb speed?
0
In constant speed propeller, if i increase RPM lever from 2300 to 2500, will the Blade AOA decrease?