Is this calculation for the 'free' climbing speed when flying in a headwind with a gradient correct?

From energy considerations, it can be found that a plane flying straight and level, if it enters a headwind with a positive gradient, will climb, extracting energy from the wind gradient.

The extra energy involved will be

Now, the question is what the extra power of that airplane will be when climbing under those conditions. It’s clear that there is an extra power, since energy is being taken from the wind gradient at a given rate…

As that rate is related to the magnitude of the gradient, we may say that, for a given wind gradient $ß$, the extra power $P_{EXTRA}$ will be:

Knowing the power, we can now find also the extra vertical speed w of the plane of mass m due only to the gradient:

Not implausible, I think…

I propose to look at it in a different way. Let's assume a constant airspeed climb.

In both scenarios the aircraft will have the same constant thrust, such that the thrust exceeds the drag. The excess thrust is equal to 5% of the weight.

For the purpose this answer, I do not look at calibrated airspeed but only at true airspeed. Basically I neglect effects of changing density with altitude.

Also, the angle of climb (flight path angle $\gamma$) is sufficiently small to be in the linear domain (such that $\cos\gamma \approx1$ and $\sin\gamma \approx \gamma$)

For the aircraft to perform a constant airspeed climb in this constant wind field, all forces acting on the aircraft (thrust, drag, lift, weight) need to be in equilibrium. 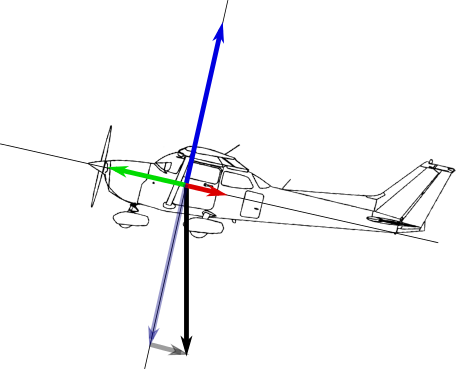 With a thrust excess ($T-D$) of 5% of the weight, the aircraft need to climb at a flight path angle of 0.05 radians which is approximately 2.86 degrees.

The vertical speed $w$ is then equal to:

Scenario 2: climbing in a wind gradient

In our second scenario, the same aircraft climbs with the same velocity and same thrust setting, but now it encounters a headwind gradient of 10 m/s per 100 meter of climb. This equates to a wind gradient of 0.1/s:

A climb of 3 m/s would result in an effective wind increase of $\tau \cdot w$ = 0.3 m/s2 which is effectively an increase of true airspeed. Therefore, this isn't a constant speed climb anymore.

To make sure the climb is performed at a constant air speed, the aircraft needs to climb faster.

In the wind gradient the climb speed of 1521 ft/min is considerably higher than the 591 ft/min achieved in a constant wind field with the same power setting. The difference is a factor of 2.57 which can be attributed to the wind.

6
The stronger the headwind the faster the plane flies if it is in the reverse command regime?
10
What is the maximum theoretical lift of a plane as a function of engine power and surface of the wings?
2
How to calculate aileron deflection for achieving similar roll dynamics at thin and dense air?
4
How is the climb/descent performance affected by wind gradient?
5
How does climb-rate vary with density/pressure altitude?
3
Why does the angle of descent increase in a constant headwind while decreases in a sudden encounter with a headwind, in a descend?
8
What costs less energy? Roll or Yaw?
0
Zenith-Add horsepower, NASA-add drag: to create lift. How is this possible?
2
Why increase chord length for supersonic aircraft (swept vs delta wings)?