Which instruments are assigned to Pilot Flying and Pilot Not Flying in the various flight stages?

Is there a document which highlights the responsibilities of the Pilot Flying and the Pilot Not Flying? Specifically, I want to find out what instruments are assigned to whom in all the stages of flight.

I haven't had any luck in finding any documents which highlight these points. So far I have read through the FAA handbooks but to no avail.

Are there any resources which I have failed to look at? Does any document explain this?

Each crewmember is responsible for moving the controls and switches in their area of responsibility:

The captain may direct actions outside of the crewmember’s area of responsibility.

The general PF phase of flight responsibilities are:

The general PM phase of flight responsibilities are:

PF and PM duties may change during a flight. For example, the captain could be the PF during taxi but be the PM during takeoff through landing.

So monitoring instruments is primarily the responsibility of the Pilot Monitoring (hence the name). But of course the pilot flying will also monitor instruments like e.g. airspeed indicator when hand flying.

The exact duties for each phase of flight are also outlined in the FCOM, but they are of course aircraft specific. The following is part of the 737 takeoff procedure: 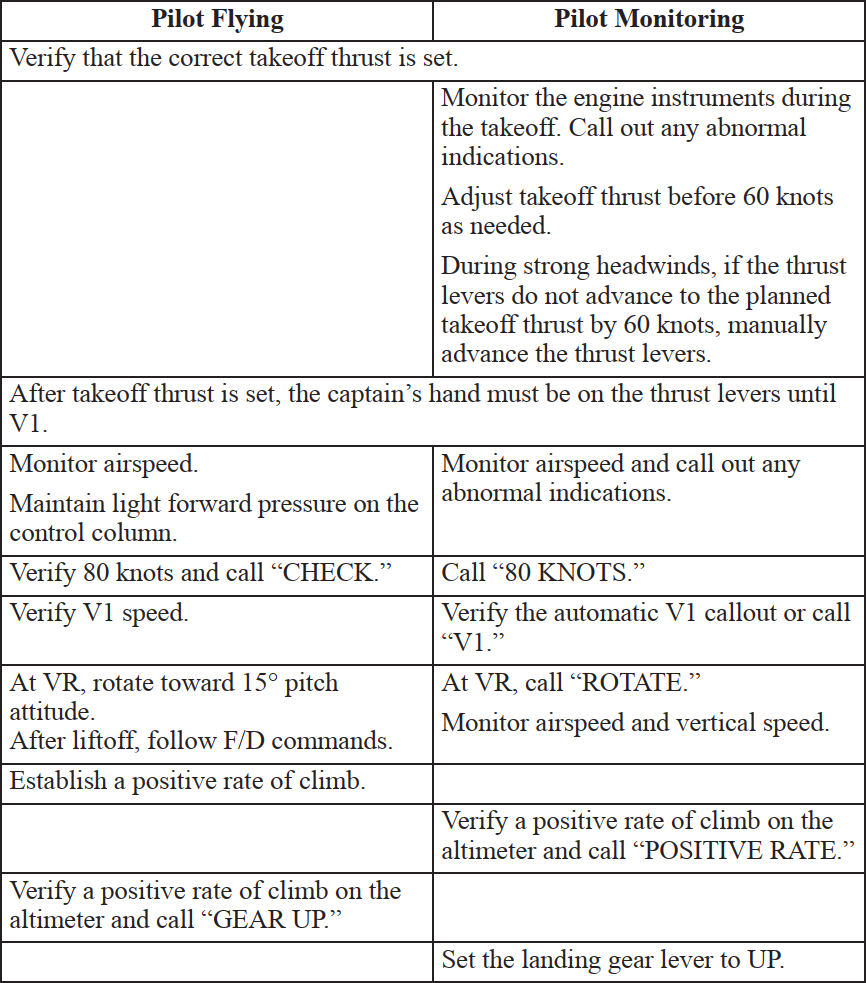 Not the answer you're looking for? Browse other questions tagged pilots flight-instruments cockpit instrument-procedures or ask your own question.

12
Under what circumstances should the pilot not flying intervene without asking for aircraft control?
20
What do these instruments do?
4
How are airline pilots assigned routes? Are there easy and tough ones?
4
Which fonts were used in old (1930s) aircraft cockpit displays and instruments?
1
Which of the pilots flies when it gets dangerous?
0
What is the most effective way for a VFR pilot to scan the instruments during manoeuvres?
2
Why are primary and supportive instruments in instrument flying different depending on the phase of flight?
15
Why does the Boeing 777X have a flight deck similar to the 787 and not to the previous 777?
2
Do the rules used in modern soaring competitions forbid gyroscopic flight instruments, or forbid the use of AHRS-driven attitude displays, etc?