What is this hole at the front of the engine pylon on a Boeing 707?

Images of the Boeing 707 show a hole at the front of the engine pylon just above the engine.

Can someone please tell me what is the purpose?

Also why do images show the hole absent on the left outer engine pylon but present on engines 2, 3 and 4? 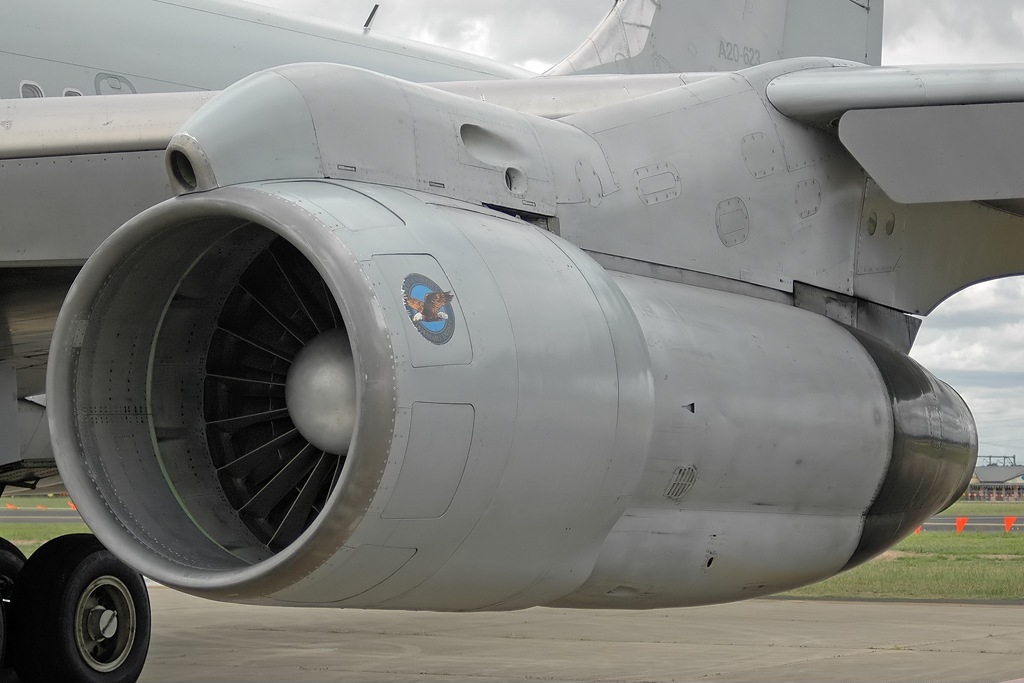 This is because those engines have turbocompressors which are used to supply cabin air.

The engine bleed air drives the turbine of the turbocompressor, which in turn would drive a compressor which would pull in air from the atmosphere through the front hole, compress it, and send it down to the Environmental Control System for use as cabin air. The discharge outlet for this bleed air is the long teardrop shaped hole in the side.

The tubocompressor can be seen in the image below. 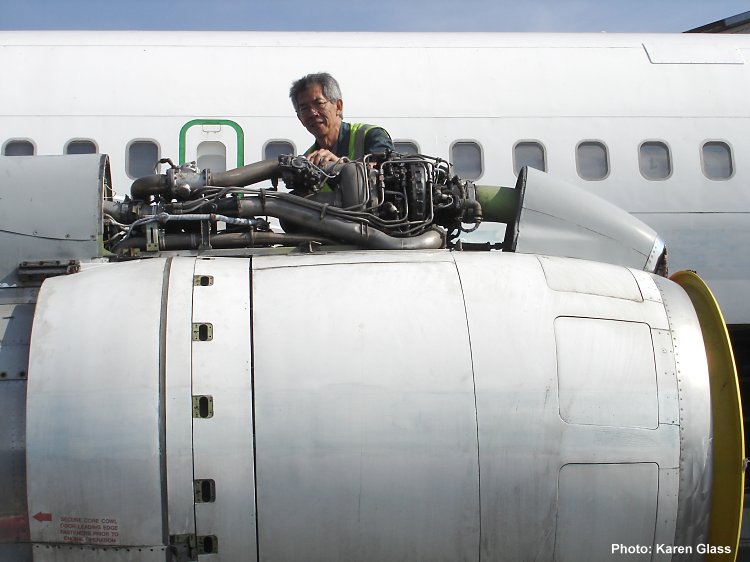 Norm King at work on the turbo-compressor on Number 3 engine on 17 August 2006. Photo: Karen Glass; image from 707.adastron.com

Wikipedia tells you the answer:

The 707 uses engine-driven turbocompressors to supply pressurized air for cabin pressurization. On many commercial 707s, the outer port (number 1) engine mount is distinctly different from the other three, as this engine is not fitted with a turbocompressor. Later-model 707s typically had this configuration, although American Airlines had turbocompressors on engines 2 and 3 only. Early 707 models often had turbocompressor fairings on all four engines, but with only two or three compressors installed.[19]

As stated above, the exact configuration varies, so some pictures show all engines the same, or not. 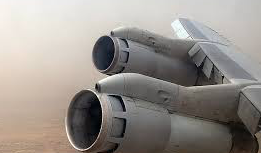 Further info is available from a discussion on a PPRuNe forum:

Turbocompressors were needed because insufficient bleed air was available from the engines at lower RPM's to keep the cabin pressurized during descent. Also, using bleeds reduced the climb performance greatly, whereas the TC's were more efficient at delivering cabin air. In addition, engine bleeds did not supply enough air for sufficient cabin ventilation with a full (189) pax load.

When maximum range was required, switching off all the turbocompressors and using engine bleeds for pressurization gave a 3% improvement in specific fuel consumptioin. This was OK for freighters, but resulted in a rather low cabin ventilation rate with pax aircraft.

Turbo compressor drive was provided by 16th stage air (high pressure, high temperature) from its respective engine. 16th stage air was also used for: engine anti-icing, thrust reversers, fuel heat, hydraulic tank pressure, surge bleed valve and water tank pressure. To operate above 40,000 ft on a B-320 we had to have 3 T/Cs or 2 T/Cs and one bleed or 1 T/C and three engine bleeds or four engine bleeds operating. Penguin is correct in stating that engine bleed air alone was not sufficient in maintaining cabin pressure in a descent. Before descent the flight engineer would start the T/Cs in an attempt to maintain the (8.6 max) cabin pressure differential. Failure to accomplish this would result in an immediate loss of cabin pressure. Normally, we would try to keep the engines spooled-up (bleeds closed above 55% N1) in the descent to augment the T/Cs and reduce the cabin pressure gradually. This procedure was also necessary when operating in icing conditions.

The key to answering your question is the weight of the TC.The first B-707 (N-70700) and early models that followed had no turbo compressors installed; same for the Air Force A & B KC-135s. These aircraft were powered by the Pratt & Whitney JT3C-6 turbo jet engine which only developed 11,200 pounds of thrust but could manage 13,500 pounds of thrust with the use of water injection. It took almost two miles of runway to get one of these fully loaded aircraft (MTOW 257,000lbs) to get air born with water injection and the take-off was always interesting. When the P&W JT-3B engine became available delivering 18,000 lbs. of thrust or 19,000 lbs. with the dash seven engine, the MTOW was increased to 326,000 lbs and the weight of the TCs could be more easily accommodated. Some B-320 aircraft did have four TCs and I believe President Kennedy"s Air Force one was so equipped. The third TC was commonly removed from freight B-707s ( #4 engine) to lower the empty weight and allow more cargo to be loaded.

Not the answer you're looking for? Browse other questions tagged engine-design feature-identification boeing-707 or ask your own question.

11
Who operates a 707 with Boeing factory livery?
10
What is the function of the protruding outlet on the Trent XWB?
6
4 Boeing 707 for $50,000. Is that possible?
28
What are those hatches on the engines of a B-2 that are open during takeoff?
5
What is that hole on the front portion of the empennage of a CRJ-1000?
5
Why is the 707’s yaw-damper-out lateral controllability marginal to nonexistent with flaps and spoilers extended?
12
Why don't NK-12 powered contra-rotating propellers turn in equal rpm?
0
What is this mysterious thing on the vertical stabilizer of the Boeing 707?