What is the purpose of the air inlets on an A320neo's pylon (LEAP-1A)?

What is the purpose of the air inlets on an A320neo's pylon (LEAP-1A)? Passive cooling, air bleed like in the 707, or something else?

It's not unique to the LEAP. You can find similar grills on the CFM56-5 and Trent 700, for example. That grill is the PCE's (precooler heat exchanger) air outlet.

Compressed (hot) air is taken from the engines (before combustion) for pressurization and air conditioning. This air has to pass through a PCE (cooled by air from the fan) before heading to the PACKs at about 200°C. The PCE is typically located in the pylon due to space constraints. 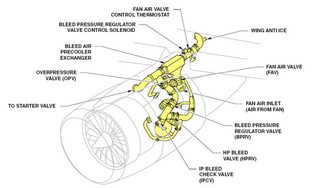 The largest of turbofans don't have the PCE inside the pylon, and instead have them in the cold bypass stream (as shown below), as does the 737 due to its short pylon (or almost nonexistent pylon on the -3/4/500 series). 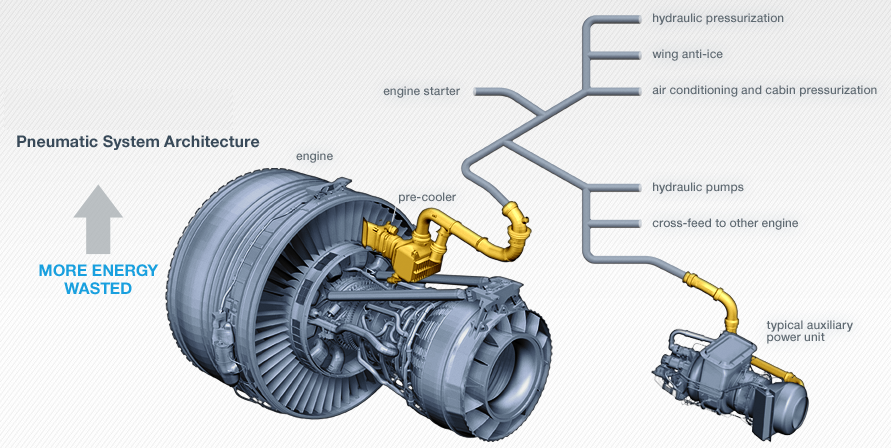 Not the answer you're looking for? Browse other questions tagged feature-identification engine-design nacelle airbus-neo or ask your own question.

46
What is this hole at the front of the engine pylon on a Boeing 707?
1
Why are the affected engine's bleed and pack switched off when there is an engine bleed under MEL?

31
What is this on top of the Air Force One?
25
What does the actual path of air within a turbojet engine look like?
46
What is this hole at the front of the engine pylon on a Boeing 707?
6
Is there a specific purpose for the silver "swoosh" on Air Force One?
0
What is this mysterious thing on the vertical stabilizer of the Boeing 707?
17
Are these two objects in cockpit of Antonov - AN 225 Mriya fans for air? What is their purpose?
7
What are the "beta lines" of a gas turbine engine component?
1
Are there aircraft with multiple inlets for a turbojet engine?