What is this ring-shaped device behind this DC-8's jet engine?

What is this ring-shaped device behind this Douglas DC-8's jet engine? 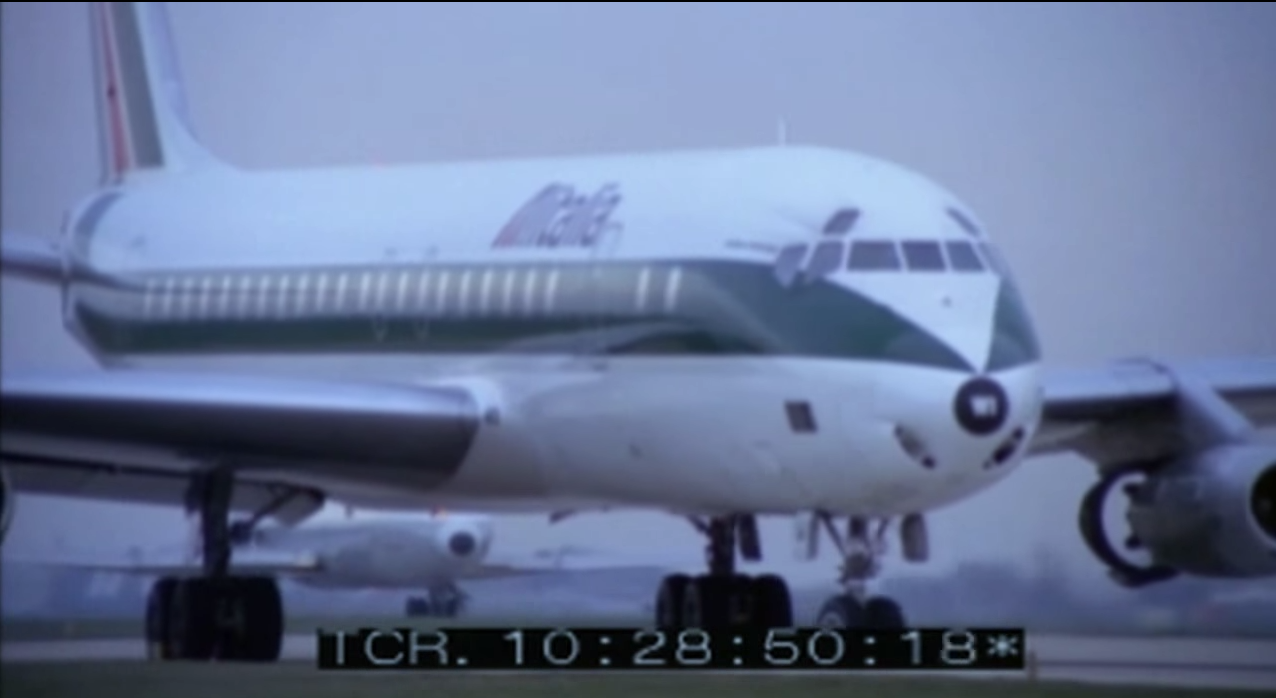 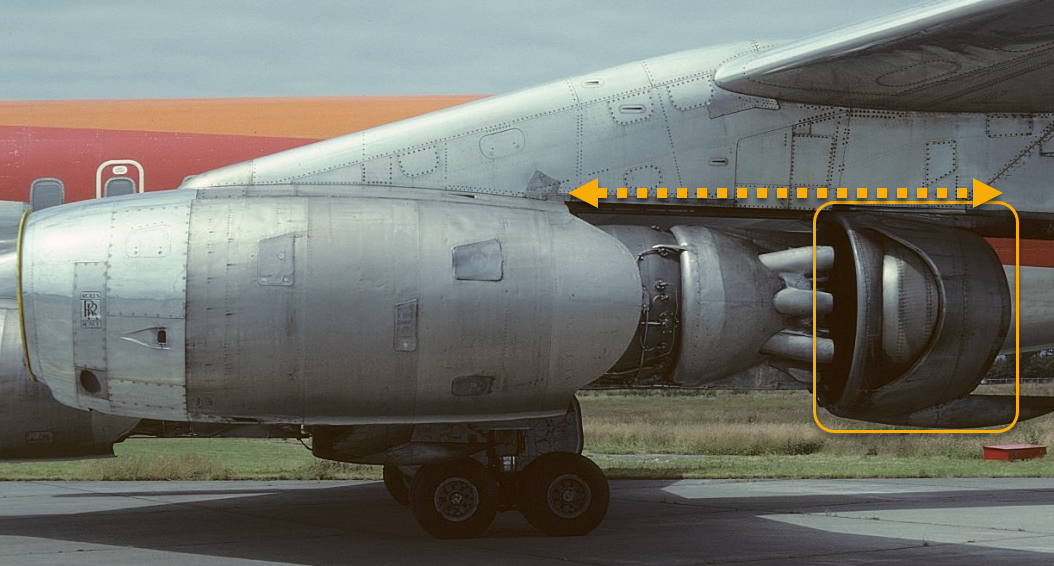 (airliners.net) Ejector on the Rolls-Royce Conway of a DC-8.

It's called an ejector.

Introduced in c. 1958 by Douglas for their DC-8, it is extended during takeoff and landing, and stowed during the flight because it increases the drag at high-speed flight.

In the extended position it acts as a noise suppressor, and it also reclaims thrust that has been lost due to the corrugated exhaust nozzle. Doors within the ejector also close to provide thrust reversal. 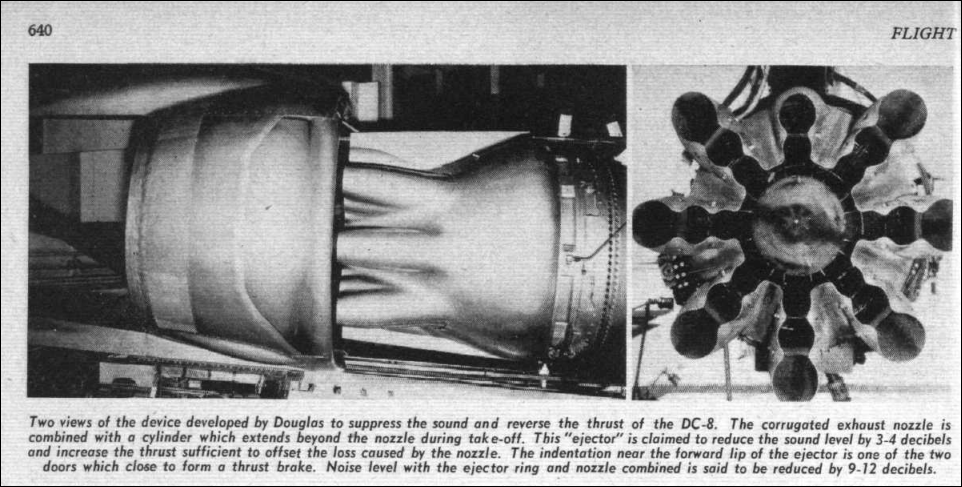 Two views of the device developed by Douglas to suppress the sound and reverse the thrust of the DC-8. The corrugated exhaust nozzle is combined with a cylinder which extends beyond the nozzle during take-off. This "ejector" is claimed to reduce the sound level by 3-4 decibels and increase the thrust sufficient to offset the loss caused by the nozzle. The indentation near the forward lip of the ejector is one of the two doors which close to form a thrust brake. Noise level with the ejector ring and nozzle combined is said to be reduced by 9-12 decibels.

(Images from aamalebourget.fr and flightglobal.com)

The image on the right shows a similar installation on the BAC One-Eleven with the positioning screw-jack mechanism.

(YouTube) Factory testing of the ejector on the DC-8.

It's an ejector and was fitted on the DC-8's equipped with JT3C, JT4A or RR Conway engines. Normally extended for T/O and landing, it is retracted in flight after T/O because it is no longer needed and creates drag at higher speeds, and then it is extended during the descent/approach phase. It is operated hydraulically to extend and retract, and can be extended by an air bottle in the event of a hydraulic failure. The controls for extending/retracting are two switches on the left overhead panel, one for ejectors on the two outboard engines(1 and 4) and the other for the two inboard engines (2 and 3), and the backup compressed air bottle extends all four and is located on the left side of the throttle quadrant. Individually, the ejectors can be extended by pulling up individual thrust reverser levers on the throttles and the ejectors will retract again when reverse thrust is deselected. The ejector does two things. It reduces noise and improves thrust output up to approx. 150 knots. It also carries the thrust reverser which operates pneumatically to increase descent rate or slow the aircraft inflight and on landing to reduce the landing roll and reduce wear on the wheel brakes. It was developed and fitted on the DC-8 at the factory by Douglas during the flight test phase of the DC-8 program before certification and entry into service and was not an aftermarket hush kit attempt by any third party. I know this because I was a Captain on the DC-8 for 10+ years.

People got this one partly right; it's Xenu's ride - a DC-8 (not a 707) fitted with aftermarket hush kits to reduce noise. They included a non-flush clamshell thrust reversers for the hot section fitted to accommodate the hush kit nozzle. 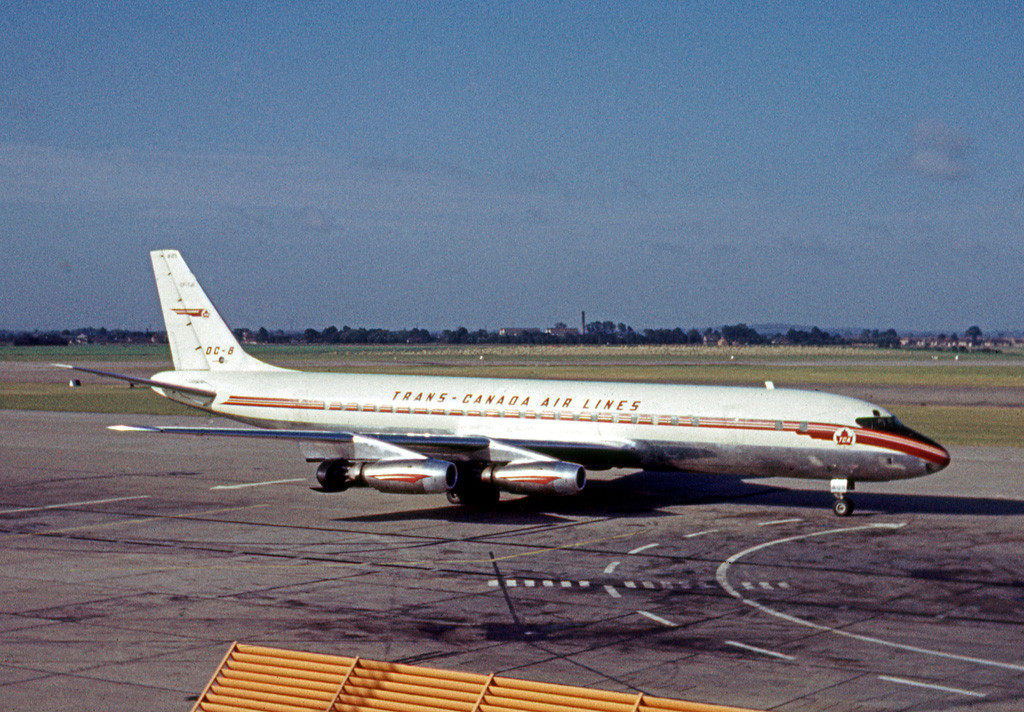 The early DC-8 fitted with Rolls-Royce Conway engines had that airframe mounted ejector type thrust reverser system, it was simple, fairly light and reliable. Even though the ejector brought some noise attenuation benefits it was not part of a hush kit. The Conway engine was very responsive but also very noisy.

Trans Canada Airlines was the ancestor of Air Canada and purchased 11 of the Conway powered DC8. It was the first engine I worked as a 19 year old apprentice mechanic at Air Canada power plant shop in Dorval in 1967.

From what I've seen discussed in various forums the Boeing 707 had two thrust reversers; one for the cold section of the engine (example) and one for the hot section. As far as I can tell the second one was only used on a few early aircraft, as the control mechanisms required quite a lot of maintenance due to the high temperatures from the exhaust, but haven't found good sources to confirm this.

Not the answer you're looking for? Browse other questions tagged jet-engine aviation-history feature-identification equipment dc-8 or ask your own question.

2
Why do large civil airliners use cold rather than hot thrust reversers?

8
What factors determine the power curve of a jet engine?
2
What was the first production jet engine to use a semiconductor based control system?
28
What is that device on an Su-27 pilot's helmet?
20
What are these "pimples" on the jet engine for?
13
What is this tube in a jet engine's air intake?
8
What is this plastic device inside the plane window?
15
What are the unusually-enlarged wing sections on this P-38 Lightning?
3
What "jet engine" is featured in this ad that Simone Giertz made for a phone?
3
Why are liquid ring compressors not used in a jet engine?