I noticed this a few months ago on a flight to Shanghai. Since then I've been looking on FlightAware occasionally, and every flight I've seen on a similar route has made a turn to the east just before reaching the coast of Shandong. My first thought was noise abatement, but that far out I believe they'd still be at cruise altitude. Any ideas? 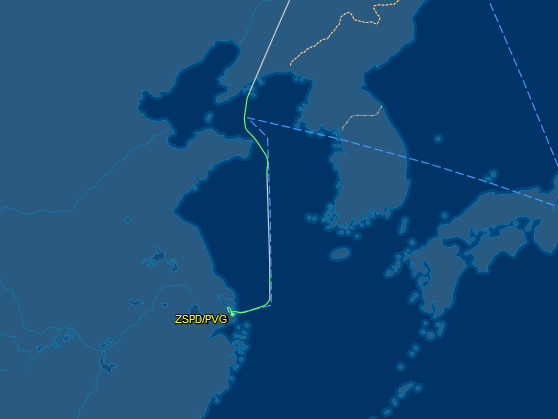 This is a guess, but it may be to avoid the restricted area ZSR-522 that covers airspace just north and east of the Shandong Peninsula. It's hard to say exactly, but it looks like your flight path more or less skirted around it, and the IFR chart suggests that the flight might have followed A326 east and then south from the ANRAT waypoint.

The Chinese AIP says (or said; that link may be out of date) that ZSR-522 is only up to 18000ft so in theory it's still well below typical airliner cruising levels. I've read several times, though, that the Chinese military control their airspace very tightly and they typically don't allow direct flight paths so perhaps they simply insist that aircraft must follow the airways because of 'national security' or some similar reason. Example:

And the military's control of nearly all the airspace between Chinese destinations means that flights within China, even by the favored national carriers, sometimes must fly indirect routes that are the equivalent of going all around the city on a ring road.

Not the answer you're looking for? Browse other questions tagged air-traffic-control navigation china or ask your own question.

106
Why do airlines follow these routes between Barcelona and Düsseldorf?
56
Why do pilots use airways instead of just "flying direct" every time?
9
Why doesn't flightradar show many flights going over China?

13
Why do commercial flights turn / bank so sharply?
15
Why do we no longer have a navigation officer on modern commercial flights?
56
Why do pilots use airways instead of just "flying direct" every time?
14
Is there a difference between how commercial jets and GA aircraft use airways?
3
Why don't all flights use the North Atlantic Tracks (NATs)?
10
Why do some airport towers avoid monitoring 121.5?
3
How does a pilot receive weather information when overflying the oceans?
17
Why don't aircraft fly over Tibet?
9
Why doesn't flightradar show many flights going over China?
3
What are some of the longest flights without modern navigation systems?