Can the pitch be very different from the angle of attack?

How much the pitch (horizontal orientation) can differ from the angle of attack? I am trying to understand the claim that "angle of attack indicator was unfortunately not available", contributing to problems during Air France Flight 447. Attitude indicator most likely was available?

The reason that the angle of attack sensor was inoperative was due to low airspeed. Below 60 knot IAS the indication is unreliable and therefore the indicator is inhibited. This also inhibits the stall warning. This lead to the confusing situation that lowering the nose to correct the stall increased the airspeed beyond 60 knots, thereby reactivating the stall warning.

That said, during normal flight it's not likely that pitch and angle of attack will be excessively different. But honestly the two aren't closely related: You can exceed the critical angle of attack and stall at any pitch, bank, or yaw angle.

Just want to add the image.

Angle of attack is important to the aerodynamics (amount of lift, drag, etc.), while pitch tells you the aircraft's orientation relative to the ground.

Assumptions for the image: still air and angle of incidence is 0. 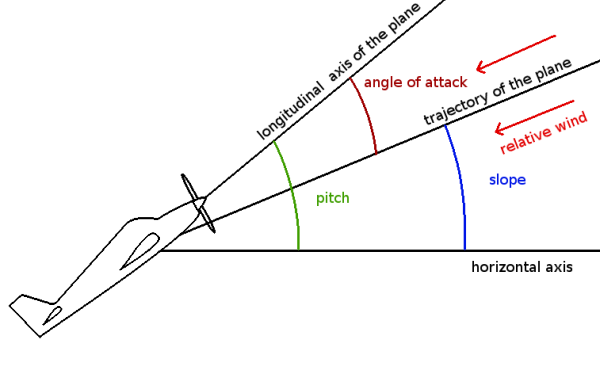 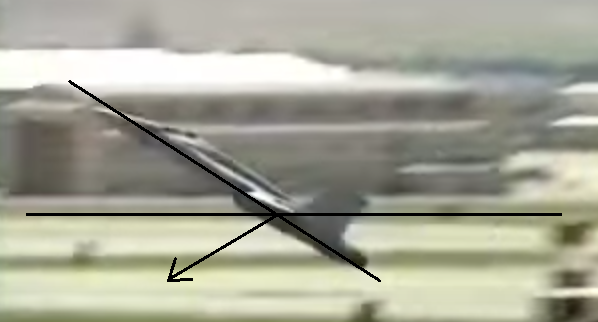 Just before the ground impact

Just watch this video of a looping gone bad during a flight display. At 1:30 into the video it becomes painfully obvious by how much both can diverge in extreme situations (shown above).

In a dive, again the difference will become large because the flight path angle takes on negative values.

The more fun it makes to fly an aircraft, the more both angles diverge. Only boring aircraft will keep both of them at similar, low values.

How much the pitch (horizontal orientation) can differ from the angle of attack?

270 degrees appears to be the maximum angle that the pitch attitude can differ from the angle-of-attack.

Some examples of extreme differences between pitch attitude and angle-of-attack:

1
What 's the difference between Angle of Attack and Pitch?
1
Why do zero gravity flights not stall?
10
Can a free-falling aircraft with no horizontal (or minimal horizontal velocity) start up and fly to safety?

11
How much lag does an Attitude Indicator experience?
17
Does stall angle of attack in inverted flight change due to the camber of an asymmetric airfoil?
12
What is the meaning of "Docile pitch behavior" in the context of Pugachev's Cobra?
6
How can I estimate Roll from Position?
9
What other circumstances may cause the autopilot to trip out?
3
What is the relationship between Angle of Attack and Angle of Incidence?
2
Lindbergh's panel-- Ryan NYP-- what is this instrument and how was it useful?
3
How does downwash affect angle of attack?