I'm researching the 2016 crash of a PIA ATR-42 in Pakistan, the report on which was recently released. Link to the report: https://www.caapakistan.com.pk/Upload/SIBReports/AAIB-386.pdf

During the incident, a series of malfunctions caused the propeller on a failed P&W 127M engine to not feather although it was commanded to do so. The overspeed governor was also not working; as a result, blade pitch began to decrease and RPM increased past the normal overspeed stop (>120%) causing massive drag.

However, at a certain point, the RPM suddenly dropped (<25%), causing a massive decrease in drag. This was critical to the sequence of events as the pilots were standing on the rudder to compensate for the drag, the sudden disappearance of which caused them to overcontrol and lose control of the aircraft within a couple of seconds.

What I don't get is why the trend toward increasing propeller RPM as blade pitch decreases would suddenly reverse if the pitch gets low enough. This is what the report says:

"If blade angle decreases below a certain angle (depending on the Np and the power absorbed by the engine), the propeller in wind-milling does no longer generate power but needs power to stay at the same rotational speed. With a failed engine, the decrease of the blade pitch angle below a certain threshold leads the propeller speed to decrease."

"There was sudden drop in Np-1. It was because of the reason that the blade pitch angle (most likely) decreased further up to a point where the power generated by propeller was lower than power absorbed by the engine and it may have later moved to a stable physical position. Np-1 decreased below 25% and then stabilized lower than 5%, with blade pitch angle close to low pitch in flight. This sudden decrease in the Np-1 resulted in sudden depletion of large amount of drag."

Furthermore, if this drop in blade pitch towards "low pitch in flight" resulted in a decrease in RPM and a commensurate decrease in drag, the next part of the sequence of events also needs clarification. After recovering from the snap roll and dive, the crew were faced with a situation where the propeller on the failed engine was rotating very slowly (under 5% np) with blade pitch at or slightly below zero degrees, but was also causing even more drag than when it was at 120%. How is this possible, if just moments earlier, blade pitch decreasing toward that value caused drag to decrease?

Any help would be appreciated. Thanks.

As the pitch of a windmilling propeller decreases (and its speed increases), it's absorbing an increasing amount of power from the air (hence, this increase in absorbed power is directly correlated to an increase in propeller drag).

At a certain point, the pitch becomes so low that the blades start to stall and the propeller RPM start to decrease. This, counter-intuitively, produces a decrease in propeller drag.

Once the propeller is at max fine pitch, with the blades mostly stalled and a very low (or zero) RPM, it is neverthless producing a lot more drag than in the feathered position, although less drag than it was at max RPM (>120% in the above case).

So, probably the pilots were still able to momentarily control the aircraft even with the propeller at >120% RPM because, in the initial stages, they still had enough airspeed and hence enough directional control.

In the later stages, with the propeller at min pitch and low RPM, the airspeed was progressively depleted so that they lost directional control, even though the propeller drag was at that point somewhat lower than it was at >120% RPM.

To confirm this, I tried the scenario in X-Plane 12, which should have a decent simulation of propeller dynamics. I used a B90 instead of an ATR42, but the results seem to confirm my explanation. You can see in the graph below propeller RPM (grey line) and propeller drag (magenta line). After I failed the propeller governor to fine pitch, the RPM start rapidly increasing along with the drag, both of them reaching a peak. Then, the pitch becomes so low that the RPM starts to decrease, and the drag settles at about 60-70% of peak drag. 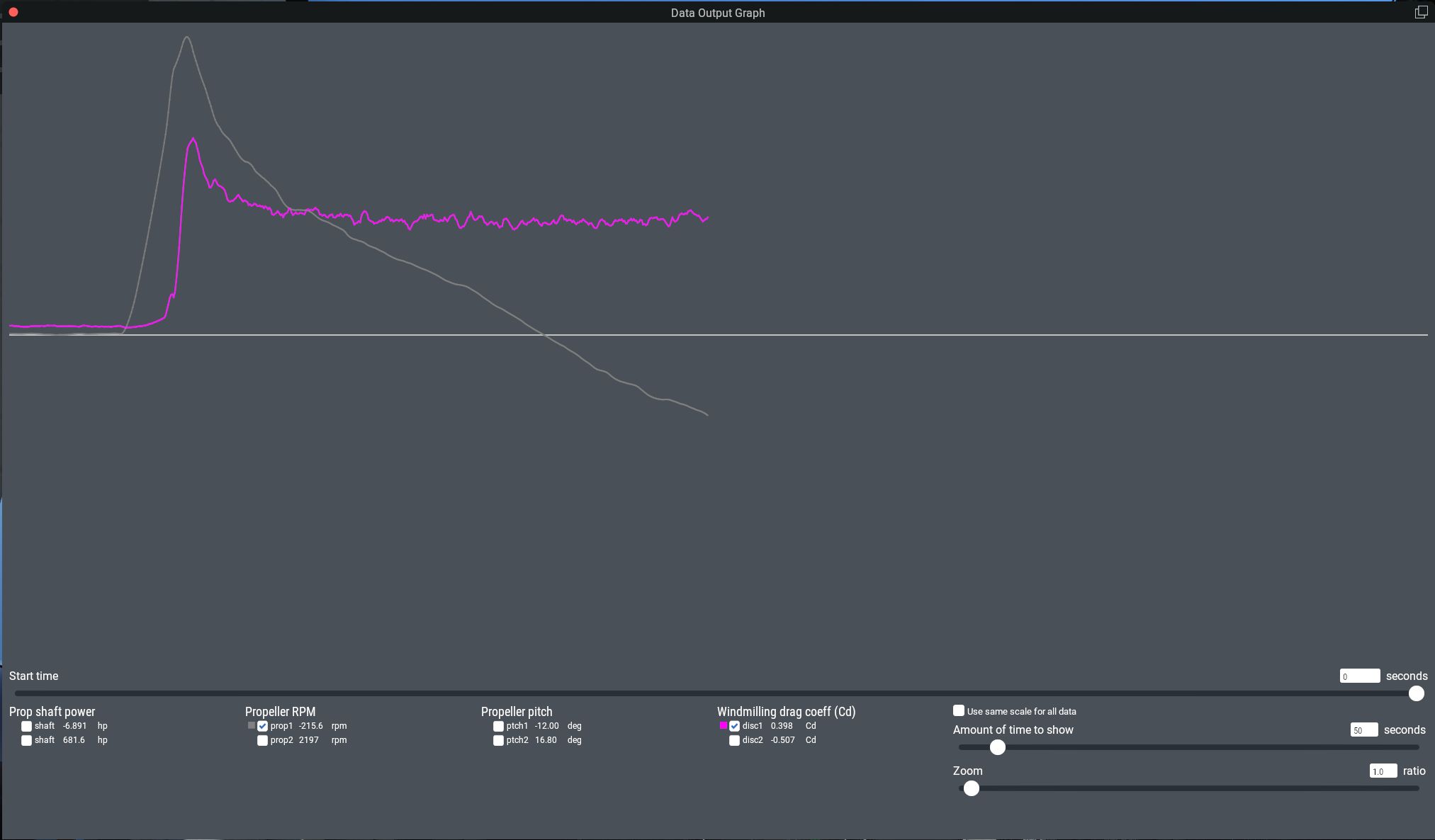