Lindbergh's panel-- Ryan NYP-- what is this instrument and how was it useful?

Lindbergh's panel-- Ryan NYP-- what is this instrument and how was it used?

Consider the "T" shaped instrument at the lower center--

The lower (vertical) part is some sort of pitch level. It is calibrated to show pitch attitude. The glass tube may possibly have a part that we can't see, that disappears into the panel.

So why how was the vertical glass tube intended to be used? Was it intended to provide useful information in cloud? If so, would it actually have provided any useful information, or not? Or was it just intended to display a precise measure of the aircraft's pitch attitude and thus angle-of-attack, during unaccelerated straight-and-level cruising flight in visual conditions, for the purpose of optimizing the airspeed and angle-of-attack for long-range cruising flight?

The calibration suggests that the instrument was intended more to detect large deviations than for fine-tuning the angle-of-attack in cruising flight in visual conditions, but it is hard to see how this would be of much practical use during actual cloud flying. It's pretty much analogous to a simple pendulum, but with more damping.

Its an Inclinometer which provided pitch and roll information

In the early 1920's, the US Government contracted Rieker Instruments Company to produce bubble style pitch and roll indicators for the fast emerging aircraft market.

One of the most famous inclinometer fluid filled vial type installations - if not the most famous - was the use of a pair of Rieker glass tube instruments on the panel of the Ryan NYP "The Spirit of St. Louis". In 1927 Charles Lindbergh chose the lightweight Rieker P-1057 Degree Inclinometer to give him climb and descent angle information. 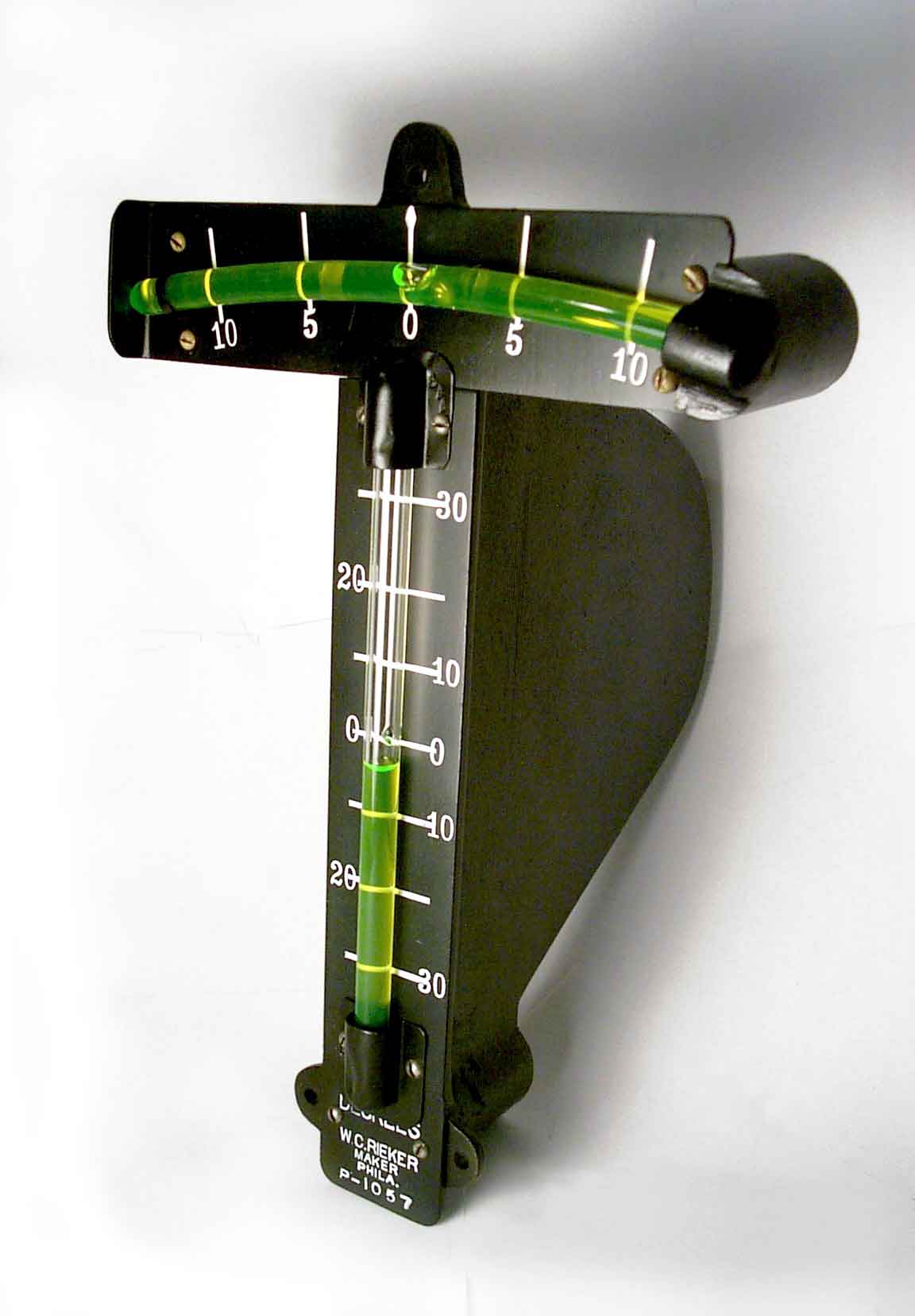 This was useful to the Spirit of Saint Louis as it had effectively no forward visibility with the exception of the periscope. He may have also chosen this in the interest of weight as it would be much lighter than an early gyroscopic instrument.

20
What was the first flight instrument ever used in an airplane?
22
What is this INOP instrument and when is it safe to fly with INOP instruments?
11
During "partial panel" flying, in what ways is a turn rate indicator more useful than a turn coordinator?
2
How useful are the AOA Indexers and indicators for jet pilots and civillians?
32
Is it normal for gliders not to have attitude indicators?
5
Can you turn off the instrument panel lights?
3
What is this instrument?
2
Do the rules used in modern soaring competitions forbid gyroscopic flight instruments, or forbid the use of AHRS-driven attitude displays, etc?
0
Is the turn coordinator showing yaw or roll a mix of the two?