How do I simplify explanations for the drag formula?

With reference to aircraft aerodynamics:

What does the above statement mean in layman's terms? Consider explaining it to a high school student.

Also, what's the simplest explanation for the drag formula too?

What does the above statement mean in layman's terms?


Also, what's the simplest explanation for the drag formula too?

Even if you have $\rho$ and $V^2$ in this formula, this does not mean that the drag $F_D$ varying in the same way that these quantities. Indeed, coefficient $C_D$ is dependent of other non dimensional parameters such as $R_e$ (Reynolds number), $\alpha_i$ (angle of attack of fluid), etc

An increase in velocity $V$ will affect $V^2$ but can also lead to a different value of $C_D$..


I tied to popularized some concepts and hope these elements can help you (but I'm aware these can be quite technical for high school level).

As an aircraft travels faster, drag increases more in thicker air (usually lower to the ground) more than it does in thinner air (usually higher in the atmosphere).

divide this value by 2

then multiply by Coefficient of Drag (basically, a value that shows how easily an object will slide through the air)

finally, multiply by Area (how much surface is actually in contact with the air. Obviously, a bigger object will interact with more air, increasing drag).

Trying a less mathematical way to make the equation plausible:

$q$ is the so-called "dynamic pressure". That's the increase in pressure you get from stopping the air coming towards your airplane (or car, or whatever) down. As long as you're not getting close to the speed of sound, that's the pressure increase you get at the tip of your aircraft. That air is trying to slow your aircraft down because that air wanted to just go on as it did but you just pushed an aircraft in its face. This pressure doubles as the air density doubles (because there's more mass of air being pushed around), but it quadruples as velocity doubles (because that air is being slowed down a lot harder if it's faster -- the square comes out of the kinetic energy equation).

Now, pressure is force per area. The bigger your aircraft, the more of it you'll get. So if you're multiplying it by your reference area, you get the force that would push you back if that dynamic pressure was acting on your whole reference area. A cube moving straight through air with one of its faces in front is relatively close to generating that much drag.

But of course a decent aircraft is a little better than a cube. It's trying to slip through with as little disturbance as it can, and that's why a good aircraft has a low drag coefficient. So the drag coefficient effectively tells us how much drag the aircraft produces compared to (roughly) a cube moving straight through the air, where one face is as big as $A_{ref}$. For a passenger aircraft these days, $c_D$ is somewhere from 0.02 to 0.03 during cruise.

The nice thing about this:

$c_D$ is independent of speed, density or size -- it's just a function of the aircaft shape. So if you build a wind tunnel model (which is smaller) and put it in a wind tunnel (which is slower than the real flight), your $c_D$ is mostly the same as for a real aircraft (ignoring Reynolds number effects, they're for another day).

1: The reference area is not some fundamental number. For a sphere or a cube, people take the cross-section area, for a car, it's usually the frontal area (i.e. the size of the shadow if you shine a lamp at it from very far ahead, against a wall), and for airplanes people usually use the wing planform area -- but there are slightly different ways of defining that. That's not a problem though, as long as you remember which area was used for the $c_D$ you're working with.

2: For an aircraft in particular, $c_D$ is not constant, because it depends on $c_L$ (the lift coefficient). For a car, that's much easier because it is mostly constant.

Considering idea gas it can be seen that density is directly proportional to pressure . Therefore this pressure has an effect on force acting on the body with respect to area. Therefore if density is increased pressure increases and force(drag) increases.

If we look at the kinetic energy of the air in front of the object, we note that:

If we assume that only the air within distance $ds$ times a frontal surface $S$ gets affected, we can write $m$ as:

We also know that work is equal to (dragging) force $[D]$ times distance:

However, this assumes that all the energy contained within our air packet $m$ is completely transferred to the object. And the influence of the object is indeed limited to our air packet $m$ (with size $ds \times S$) . This is usually not the case, and to indicate to what degree this happens we add a correction factor $C_D$ to $(7)$:

This also gives you a nice bridge to explain more about the meaning $C_D$ and how it varies for different shapes. In what situation will you have a $C_D$ of 1? What can you do to reduce $C_D$? What does it mean when $C_D$ is larger than 1? 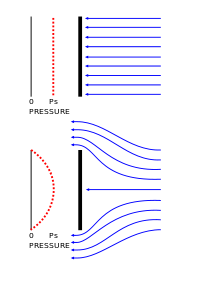 3
What is the true formula for parasite drag?
12
What is the relation between an airplane's altitude and the drag it is experiencing?
3
What is the relation between airspeed and generated heat at constant drag?
8
How does Reynolds Number affect skin friction drag?
2
What is formula for induced drag in stalling regime?
9
Why is ground effect greater over smooth hard surfaces?
0
New Research: VGs increase lift to drag ratio up to 880%. Does it work for flaps too?
1
How do power and thrust curves compare?