New Research: VGs increase lift to drag ratio up to 880%. Does it work for flaps too?

Aerodynamic Free Lunch: VGs increase L/D ratio up to 880%. Does it work for flaps too?

I understand this research was for a wing without flaps.

I understand this reduction in drag with VGs works only for the alpha range past the max Cl point of the wing without VGs, eg. 8-18 deg, increasing the L/D by 880% at 18 deg AOA as shown in the table and graph below. 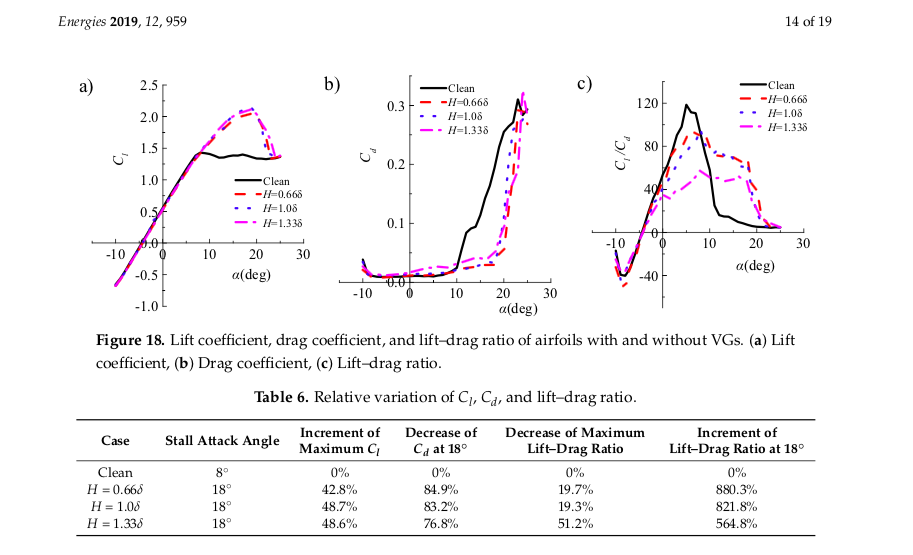 Graph C tells the story. Better to go with slats and flaps. Vortex Generators remain valuable to alter the airflow characteristics of a section of the airfoil or control surface.

Drag producing and lift destroying chaotic turbulence on the upper rear of the wing appears to be reduced by the Vortex Generators at higher Angle of Attack. Notice turbulence starts to form before the wing is fully stalled on a "clean" wing, resulting a peak Lift/Drag of around 6 degrees. By energizing the air flow and keeping it attached, more lift can be created at higher AOA as seen in Graph A.

However, anything that cannot be retracted will carry a drag penalty at optimum L/D, but, as with many larger radius leading edges, Vortex Generators, or VGs, can make the L/D curve much smoother and predictable rather than a sharp break from a very narrow peak.

VGs have found application in elevators, but a flap beyond a given angle of deflection is actually more useful stalled and draggy. Lower degrees of flap deflection, along with slats, serve to increase camber of the wing to create more lift at lower speeds, also with a drag penalty compared with "clean".

Note the airfoil used in this study is cambered. It starts to generate lift a -5 degrees AOA, and drag with VGs is actually greater than "clean" at lower AOA typically found in cruise (Graph B), with little difference in lift produced.

Not the answer you're looking for?Browse other questions tagged aerodynamics or ask your own question.

5
For a large commercial plane on landing, does the L/D ratio increase, decrease, or not change much?
3
How does wing flex reduce wave drag?
1
How does wing aspect ratio influence lift and drag?
4
Do vortex generators increase Re of a wing?
2
Does using wings with different wing loadings work the same as a swing wing, without swinging the wing?
2
Cascading Wings: Do they really increase lift by 300%?