What is formula for induced drag in stalling regime?

I'm wondering what is the formula for induced drag in a stalled regime, i.e. in a regime where the $C_L$ (coef. of. lift) has started to decrease but is still nonzero.

I've a feeling that the conventional formula for induced drag $$D_i = \frac{L^2}{\frac{1}{2}\rho V^2 \pi b^2 \epsilon}$$ (taken e.g. from this answer) which in essence depends on lift $L$, does not explain induced drag in stalling regime (if it would, it would erroneously imply that the induced drag is equal for a pair of AoAs $\alpha_{\text{before-stall}} < \alpha_{\text{after-stall}}$ which both correspond to the the same $C_L$).

I've come across the evidence that induced drag continues to grow as square of AoA even in stalled regime (e.g. schematic Fig. 4.14 from av8n.com)

aerodynamics drag theory
Share
Improve this question
asked May 14, 2018 at 14:00

As the definition implies, this drag is induced by the generated lift, the effect of stall (flow separation) is not contributing to this drag component.

Therefore, there is no other formula for the stalled regime.

Beyond the stall, the wing profile is governed by flat plate aerodynamics. The airfoil does still have lift and drag, and one could express one as a function of the other, but I have not seen a useful application of it. 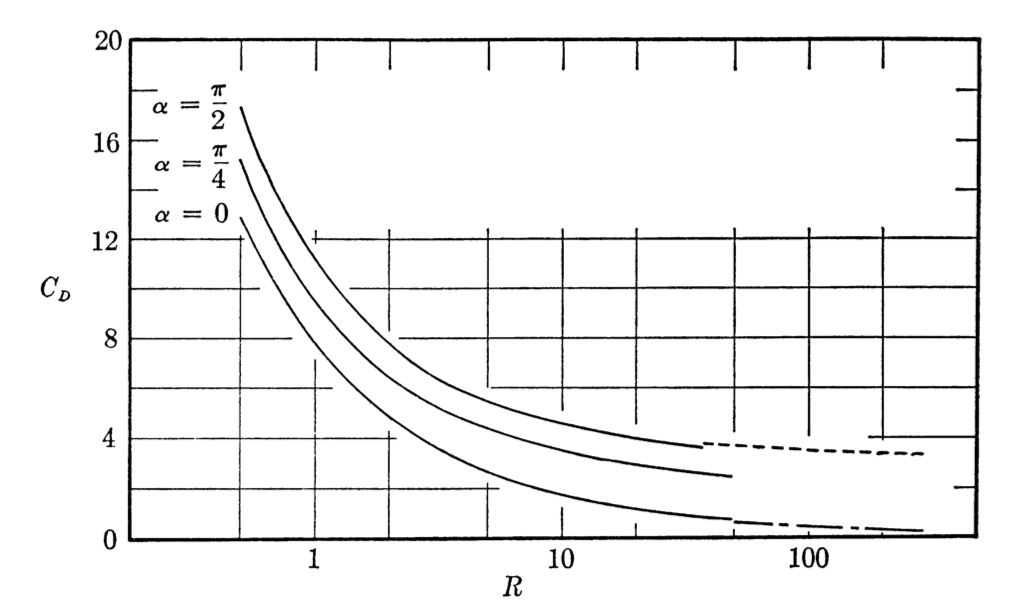 Flat plate drag is a function of Reynolds number. The picture is from this document, and shows $C_D$ as function of $Re$ and AoA.

More info, an equation and 360 deg plots of a NACA 0012 profile in the answers to this question. Looks a lot like sine & cosine graphs, doesn't it.

If we interpret induced drag as the backward component of the lift vector (explained here and here), post stall is not much different from pre-stall.

The final experienced induced drag is influenced by both (i.e. how big is the lift force, and how much is it tilted backward), so how the induced drag actually develops with AoA depends on the relative change in both and thus is highly dependent on the airfoil.

From my understanding induced drag is the penalty for accelerating air (to create lift) and the creation of the wing tip vortices. If you deflect the air a lot it creates more induced drag, stronger vortices but also more lift and if you don't deflect it as much it creates less lift, less induced drag. Notice I haven't even mentioned the stall because to me that is a general cause and affect relationship. As you angle the airfoil up to create more lift you deflect the air down but this deflection of air also affects the incoming airflow (as long as we're subsonic) and because of that the net force vector starts pointing aft a little bit. It is this additional deflection of the force vector that causes a drag force, the induced drag.

Note: The lift after the stall doesn't drop to zero! There will always be quite a bit of lift throughout the full angle of attack range as can be seen in wind tunnel results (already linked by other users here but I'll repeat it: What is the performance of a flat plate wing?). Only at around 180° angle of attack and around 0° will the lift coefficient ever be close to zero and thus create no more induced drag. At 45° angle of attack the wind tunnel results show a lift coefficient of roughly 1.1, which can be more lift than if the airfoil is in normal operating range.

Not the answer you're looking for? Browse other questions tagged aerodynamics drag theory or ask your own question.

28
What is ground effect?
17
What is the performance of a flat plate wing?
7
Is induced drag caused because of the tilt of the wing backwards?
6
What is the formula for induced drag?

3
What is the true formula for parasite drag?
10
What is the maximum theoretical lift of a plane as a function of engine power and surface of the wings?
5
Is the induced drag independent of wing span?
6
What is the formula for induced drag?
4
Why does the aspect ratio of a wing become less important at supersonic speeds?
3
How can the zero-lift drag coefficient (parasitic drag) be calculated?
0
How to calculate the induced drag coefficient?
1
What are the effects of increasing Wing Aspect Ratio?
5
Why does lift decrease and drag increase when approaching the stall condition?