What's the point in escorting a threatened flight with two fighter jets?

Two days ago I read in the news:

Two U.S. fighter jets escorted a Canada-to-Panama flight back to Toronto after a passenger allegedly threatened the plane Friday morning. The nature of the threat or why the passenger was agitated were not specified. CBS News reported that the passenger told a flight attendant, "I have a bomb and I will blow up Canada." 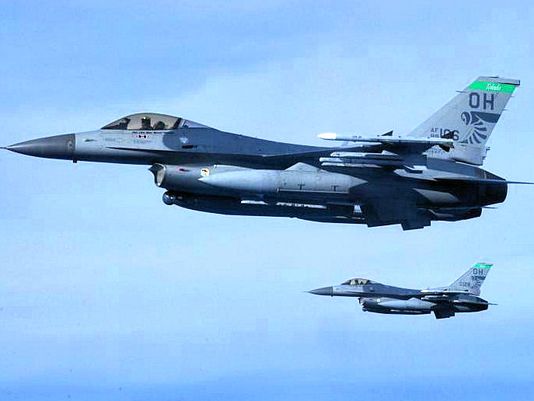 What's the point of escorting the flight while it has been threatened by a passenger? How do they help to eliminate the threat?

Fighter jets escorting planes after various sorts of emergencies seems to be standard procedure in many countries, you hear about it quite frequently. It's sometimes implied in the media that if the situation would turn into a 9/11-type hijacking it might be necessary to shoot the plane down but nobody seems willing to fully clarify who could take such a decision and under what conditions on the record.

Now, in most cases, there isn't even a suggestion that a hijacking is happening but it's difficult to determine that in a timely manner and there are still two things fighters can do in other cases:

Also, one factor is that being able to scramble jets is often seen as a basic requirement to assert sovereignty (witness the mini-controversy in Switzerland when it was revealed that the air force could not do it at certain times of the day) so politically it seems difficult to entirely give up on it, even if it could be argued that it's a waste of money for smaller countries to maintain an air force that does very little beside this type of missions.

Especially post-911 it became paramount to ensure that such aircraft form no threat to cities and other places where crashing an aircraft into them would cause serious damage.
Blowing it out of the sky, however bad it would be for the passengers (not to mention the psychological impact on the fighter crews and their controllers) would be preferable to having thousands of victims on the ground (and a major PR coup for some terrorist group).
So jet fighters are scrambled to escort the aircraft until it's on the ground somewhere or the threat otherwise neutralised (say the attempted hijacking foiled by people on board).

This is little different from fighters being scrambled to escort intruders into a nation's airspace (and in extreme cases shoot them down) which has been done since the end of WW2 and maybe sporadically before (without radar to detect intruders and guide interceptors it's a lot harder to do so obviously, and prior to WW2 that wasn't available).

In this specific case it may have been overreaction to a madman with a fake bomb, but not knowing whether the threat was real or not it's easier to send up the fighters and later recall them than to have to explain to congress and even worse the press why you didn't act after the jetliner crashes into some city center during lunch hour...
Be happy that they have the option to send up fighters and don't have to rely on guided missiles alone, as there's no recalling those once launched...

In addition to @Relaxed's answer, one additional reason would be if the hijacker gets control of the cockpit and turns off the transponder. ATC works on secondary radar with a signal bounced back from the plane in order for ATC to track the aircraft.

If the transponder is turned off, it would be very difficult for ATC to track the exact whereabouts of the plane. By having escort planes, they could maintain positioning of the endangered aircraft.

If absolutely necessary the plane can be prevented from making a mess of a major city, but it is basically a rather obvious visible sign to anyone misbehaving in the plane that they are in very, very deep trouble.

Given the threat of "I have a bomb and I will blow up Canada" the cabin crew are clearly overreacting. Highly unlikely a bomb big enough to take out Canada would go unnoticed, esp. as the plane would be grossly overweight with it.

The utility of sending fighter jets is to destroy the plane before an hypothetical attempt. It's unfortunate, but the point is to kill a few people to save many. This can also possibly have the impact of scaring the hijacker/terrorist.

In the mean time, someone in the ATC can attempt to negotiate with the terrorist before any shoot-downs are needed.

In France, we send two fighter jets, because one jet is there to make contact with the pilot (seated on the left of the cockpit) while the other fighter stays behind the aircraft ready fire if needed.

The only person allowed to make the decision to fire, is the Prime Minister.

In fact, fighter jets take off on these missions quite often, but it's usually only for providing assistance (e.g. providing landing clearance to an aircraft with dead radio).

As far as an on board nut-job being aware of any possible "trouble" he/she may get into, I think they usually don't care if they are 911 fodder.

When I heard that a second plane hit on 911, on the way to work, I knew life (mostly @ airports) had changed right then.

Not the answer you're looking for? Browse other questions tagged airliner military or ask your own question.

3
What would escorting an airliner which is the subject of a security threat by fighter jets achieve?
21
How do fighter jets communicate with an intercepted plane that's lost comms?
9
Are military jets always scrambled when communication to a commercial aircraft is lost?
3
Why is a plane escorted while in technical difficulties?
-4
Why shoot down a passenger plane without knowing it will crash?