What's the point of intercepting an aircraft?

I know that it's possible for military aircraft to "intercept" a civilian or foreign aircraft (and I'm well aware of the US interception procedures), but why would they be doing it in the first place?

What does it actually prevent from occurring?

They can't remotely control the aircraft, so is there anything that they can do once they intercept it? 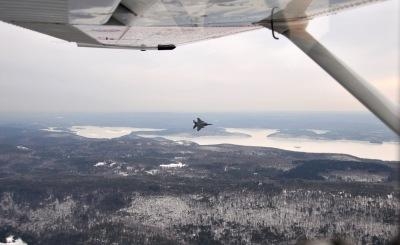 Military interception usually happens after failure to make the aircraft comply by other means (such as radio, light signals, flares). So, first and foremost it is one way to do visual communications, which is usually hard for the pilot to miss. The messages for follow (wide level turn), land (low pass, landing gear extended), and continue on course (climbing turn) are well established (possibly even internationally?) and all pilots should know them, and are probably enough to defuse most situations. Not to mention that you should try to establish radio communications on 121.5 if you're being intercepted.

I'd wager a guess that the most common cause for interception is that a pilot has strayed into restricted airspace without talking to anyone on the radio, without any malicious intent.

If the pilot ignores the messages, there's always the option of using force, if the risk to occupants and collateral on the ground is acceptable.

The most common reason for interception is that an aircraft is not communicating with ATC and is somewhere that they aren't supposed to be. Often times it turns out to be unintentional with the aircraft on a VFR flight (i.e. poor flight planning or deviating for weather) and straying into a restricted or prohibited area.

In these cases, the standard intercept signals (AIM 5-6-4) are designed to attract the pilot's attention and have them proceed out of the area. In addition to the "standard" signals, they can also drop flares in front of the airplane to really get their attention if needed.

In cases where the airplane still doesn't respond and the aircraft appears to be a threat to national security, the decision can be made by a few senior military and civilian officials to actually shoot down the aircraft.

For more detail, in the US section 5-6-2 of the AIM gives the following reasons that a civil aircraft may be intercepted by a military aircraft:

1. In conjunction with the FAA, Air Defense Sectors monitor air traffic and could order an intercept in the interest of national security or defense. Intercepts during peacetime operations are vastly different than those conducted under increased states of readiness. The interceptors may be fighters or rotary wing aircraft. The reasons for aircraft intercept include, but are not limited to:

(a) Identify an aircraft;

(b) Track an aircraft;

(e) Establish communications with an aircraft.

Flightgear.org also has a good wiki on interception procedures that covers some of the common reasons that they are used (and includes all of the ones that I was going to include):

Reasons for interception in real life

As far as I know, interception of civilian aircraft is done to assess a situation where the safe status of a flight is uncertain.

A Vueling A320 got intercepted some time ago when the French ATC weren't able to communicate with the pilot. The same airline some time later got another interception by the Dutch.

Intercepting the aircraft and watching the situation inside the cockpit and/or the cabin can help to assess whether there is a serious situation developing (and further actions can be taken, such as alerting emergency services on the ground, monitoring the flight path, continuing the interception procedure to try to improve the situation).

It's not about piloting the intercepted aircraft, but about assessing the status of the flight. I think it's just a matter of gaining some time if a hijacking occurs.

Not the answer you're looking for? Browse other questions tagged safety military flight-interception or ask your own question.

15
Can an intercepting fighter jet force a small propeller aircraft down without completely destroying it?
9
Are military jets always scrambled when communication to a commercial aircraft is lost?
0
How would fighter jets make contact with a previously hijacked aircraft?
-4
Why shoot down a passenger plane without knowing it will crash?

13
Can civilians fly military aircraft?
20
Why do heavy bombers not carry air-to-air missiles?
10
What are MTRs used for?
2
Why are there age limits to becoming a pilot in the armed forces?
9
What are the correct procedures for military aircraft interception over international waters?
1
Is "hacking small planes" a separate or larger problem from/than general small-aircraft security?
2
What is a "Standard visual inspection"?
37
What do pilots landing on aircraft carriers do when the ship is not visible due to weather?
18
How does in‑air refuelling work from a strategic point of view?