What is the dutch roll filter? How does it work?

Some airplanes have a dutch roll filter for the "yaw damper."

What is the dutch roll filter? When is it used? Is it ever required for certification or operation? How does it work?

autopilot dutch-roll
Share
Improve this question
edited May 22 '20 at 12:21

I assume you know what a dutch roll is, if not here is a brief summary: At the airplane yaws to one side the wing that is moving forward has a higher speed and creates more lift which causes the aircraft to roll towards the trailing wing. There are also effects like the vertical stabilizer usually being above the center of gravity which at great side slip angles causes the aircraft to roll towards the trailing wing as well. And lastly there are effects like the fuselage causing a disturbance on the trailing wing. All these effects depend on the aircraft type and wing configurations. But generally speaking a yaw rate creates a roll rate as a side effect. And if you move the rudder left and right constantly then you cause the wings to rock, which is called a dutch roll. This behavior is quite unpleasant for passengers in the back or front because they are accelerated left and right.

To suppress this side effect of a yaw motion creating a roll motion and a subsequent dutch roll you can add a "durch roll filter" to the yaw damper control system. All it does from my understanding is to combine the normal feedback loop for the yaw rate with a second loop for the roll rate. This causes the yaw damper to reduce rudder deflection slightly whenever the roll rate picks up and increases it again when the roll rate stagnates which can stabilize the dutch roll and causes a more uniform roll rate. Modern fly by wire aircraft can also use the ailerons to dampen the dutch roll much more effectively. But if the yaw damper can only affect the rudder than this is obviously not an option.

I'm not 100% sure when it's used but I'm guessing that all modern airliners have this because there are people in the far back that would get motion sickness really quickly when the yaw damper allows a dutch roll and the aircraft swings side to side on every turn. For a small general aviation aircraft this may not be needed and development costs can be kept low.

As per all control systems I think the yaw damper with or without this filter has to be certified. And if the system is changed later on will also have to be tested and certified. Depending on the aircraft type you may need redundant yaw dampers

Yaw damper systems implemented on most transport category aircraft accomplish the task of damping the dutch-roll. The only control output needed is the rudder.

Simple yaw damper system may use only yaw rate in its feedback. This increases the effective yaw damping, which increases the dutch-roll damping and is robust. However, the presence of the washout filter is less amenable to combating dutch-roll during turn maneuvers. In order to achieve good transient behaviour and adverse yaw suppression, feedforward is typically added from roll command in the form of turn coordination function. An example of a yaw rate damper design with feedforward is shown below:

Most modern yaw damper on large transport category aircraft also feeds back lateral acceleration ($N_y$), since it's dynamically coupled with sideslip in flight, blended with yaw rate to increase robustness, and using the rudder system as the control output. This design is much more capable at suppressing undesired oscillations during turns. An example is shown below (the yaw damping system is the bottom half): 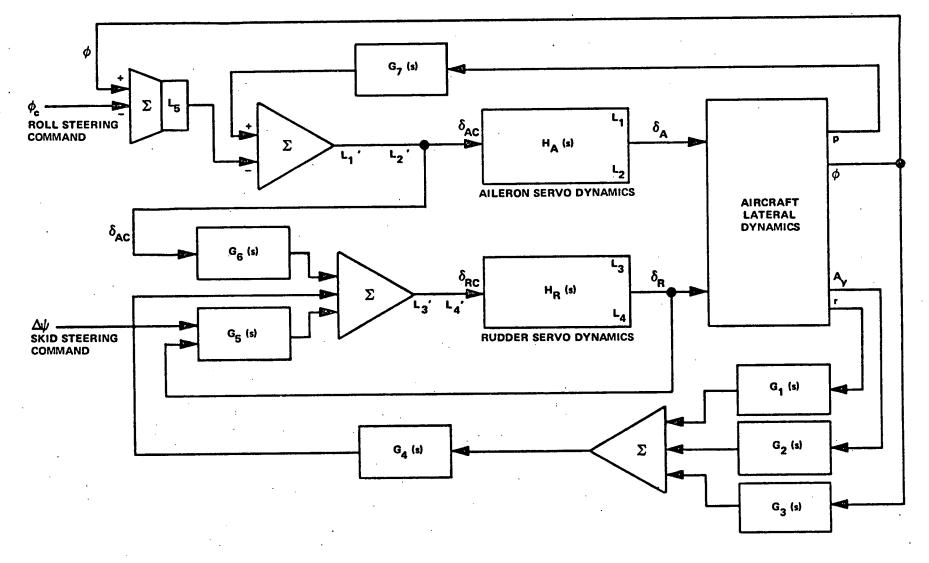 With fly-by-wire, the latitude of control is greatly expanded. Control techniques such as eigenstructure assignment can be employed to completely separate lateral/directional degrees of freedom, thereby eliminating dutch-roll altogether.

Not the answer you're looking for? Browse other questions tagged autopilot dutch-roll or ask your own question.

3
What does the balance ball actually indicate?
0
Can having too small of a roll or yaw stiffness destabilize the dutch roll mode?

18
What is the purpose of multiple autopilots?
23
Why is the “Dutch” roll called so?
1
How does the control-board on small drones govern their flight?
11
What makes spiral instability less harmful than Dutch roll?
3
How exactly does a pilot engage the autopilot?
2
How does an auto-pilot control altitude changes?
17
How does envelope protection work in Airbus vs. Boeing aircraft?
0
Can having too small of a roll or yaw stiffness destabilize the dutch roll mode?
1
How do Airbus and Boeing aircraft handle Dutch roll?