How does envelope protection work in Airbus vs. Boeing aircraft?

I keep reading this thing that "On Airbus the computer overrules the pilot, not on Boeing". Smells like urban myth or at least gross oversimplification. How does envelope protection work differently in Airbus and Boeing aircraft?

Boeing: as far as I understand it, it's possible to apply force on the column to override the autopilot and have zero limitations, i.e. you're free to (try to) fly the aircraft in whatever attitude you want.

Airbus: if all the systems are failure-free there's no way to override the autopilot, i.e. you cannot fly in any attitude you want.

It would be really lovely if someone with factual knowledge on the matter elaborate more, maybe explaining the different laws and when they can be / are activated.

Related post What are the main differences piloting Boeing vs. Airbus aircraft? does not answer the question.

There are two sorts of "autopilots", and it is important to make a distinction between the two. One is for the behaviour of the aircraft around its Centre of Gravity (CoG), the other one is for defining the path of the CoG.

So normally, by design, the Outer Loop autopilot shows the pilots what it is doing by moving the flight path input devices for them, in a way that is transparent and can be intuitively overridden by applying a high force. It is this bit where the A320 has a different philosophy: the input stick never moves other than by the hand of the pilot. This main distinguishing feature between the two types of autopilot does not exist in an A320. It does in a B777, which also has an inner loop autopilot plus envelope protection, and an outer loop autopilot which actually does move the column/yoke. So the B777 is functionally identical to the A320 in every meaningful way, plus retains the feature of moving flying controls. It has no mechanical linkage, and it uses two separate sets of actuators for this function: one set for the surfaces, and one for the flying controls.

This is the situation on both Airbus > A320 and Boeing > 777, when all systems are functioning. These aircraft are all dynamically stable: aerodynamics take care of bringing back the aircraft attitude to a neutral position. The F16 for instance is aerodynamically unstable in order to provide high manoeuvrability: it always wants to pitch and roll already, and the flight control computers provide constant rapid inputs to elevators and ailerons to maintain attitude by active control. This is not the case with passenger aircraft, which do not need to be as manoeuvrable as a fighter jet and just need to bring the passengers home safely.

Therefore, both on the Airbuses & Boeings, the aircraft can fly without the Inner Loop autopilots as well, without any problems. The aircraft just lose their envelope protection and now it is possible to command them into potentially dangerous situations such as fully developed stalls. In both types, it is always possible to disconnect the outer loop autopilot. For the inner loop ones:

In the latter two types, the system disconnects features by itself if failures are detected, to allow control in degraded mode. Both manufacturers have implemented a direct mode as the lowest mode, where surface deflection is a direct function of stick deflection. There is however no direct mechanical cable connection to the surfaces, even the direct mode is still an electrical input, so technically still Fly By Wire. 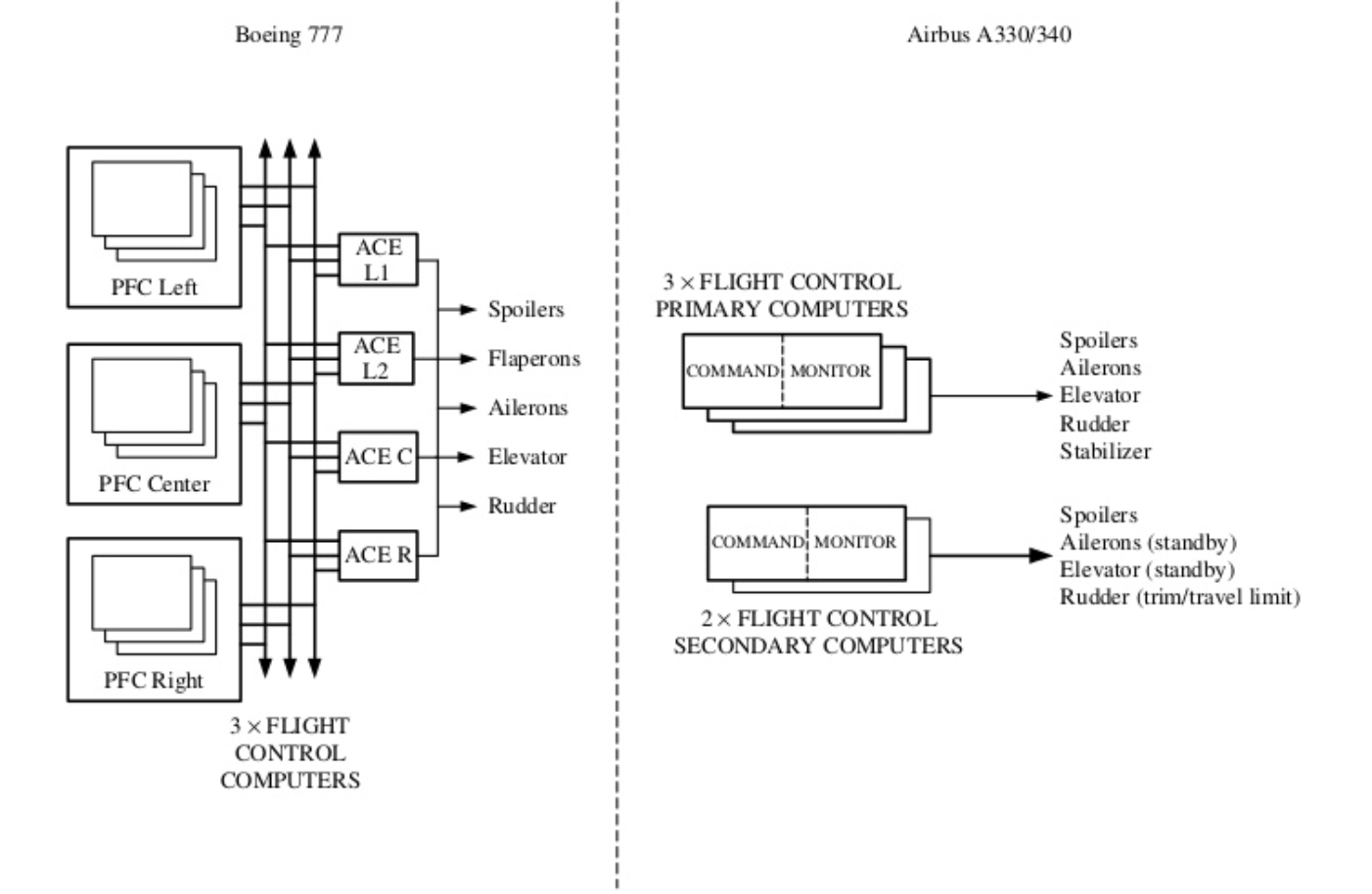 Above picture is from Aircraft Systems Mechanical, electrical, and avionics subsystems integration Third Edition Ian Moir Allan Seabridge, and shows the top level comparison of the implementation of the flight control loops. The redundancy features are different, functionality is much the same: both implementations prevent excessive AoA that brings the aircraft into a stall, and excessive bank angle.

So although the functionality of modern Airbuses and Boeings is very similar, we do often see the myth that Airbus ranks the automated systems higher than the pilot. There is a difference in user interface implementation, in that Airbus has sticks that are not coupled with each other, and have no means to be driven other than by hand. At the time of implementation, this was a new feature that pilots were not accustomed to, as was the envelope protection system. New features can be poorly understood by inexperienced users, and the aviation world is conservative: when the DC3 introduced a 3/4 control wheel, pilots were protesting that they might be gripping the bit of the wheel that was missing and that they were used to.

Ultimately, the most relevant fact is that both Airbus and Boeing have excellent and very similar safety numbers, and that both manufacturers make aircraft that enable the pilots to bring the passengers home safely in 99.9999999 % of flights.

Not the answer you're looking for? Browse other questions tagged flight-controls autopilot airbus boeing or ask your own question.

51
What are the main differences piloting Boeing vs. Airbus aircraft?
34
Why can't the A320's computer-imposed limits be overridden?
32
Why are on-board computers allowed to change controls without notifying the pilots?
16
Is a Control Law Degradation in Airbus Planes displayed on the ECAM?
7
What is the difference between the series and parallel yaw-damper systems for the 707?
4
Is it possible to totally override the flight computer on the Airbus A320-family (in simple non-technical terms)?
8
Does the pilot still have final control authority on modern Boeing airplanes?
7
How does flying a helicopter compare with flying a fixed wing plane?
8
Why does the MCAS use the horizontal stabiliser rather than the elevators?
5
What happens if full thrust is applied at cruise altitude for 5-10 minutes on a 787?
See more linked questions

51
What are the main differences piloting Boeing vs. Airbus aircraft?
48
How can I tell apart an Airbus from a Boeing?
16
Why does Boeing name its aircraft B7x7 and Airbus names theirs A3x0?
25
How does the Airbus flight computer's voting system work?
13
Why do Boeing aircraft have serrated engine nacelles, but Airbus does not?
7
Why do Airbus aircraft typically have less wing flex than Boeing aircraft?
7
Are the Boeing MCAS and Airbus Alpha Protection systems the same?
0
Why did Boeing keep using yokes while Airbus moved on to sidestick?
6
Why does an A300/310 in LAND or GO-AROUND mode have to be at least 400 feet AGL for manual control column movement to disengage the autopilot?
1
How do Airbus and Boeing aircraft handle Dutch roll?