Why do airports have directional runways instead of a large area to operate in any direction?

Instead of a few runways in a few directions, why not have a large square block of asphalt so that planes can take off and land in any direction? Where and on what direction planes land and take off will still be determined by ATC, but these decisions are then not bound by the choice of just a few runways. So, there will only be virtual runways and taxiways instead of real physical ones.

The typical World War II "A" runway shape solves this issue, without covering a huge amount of area with concrete, etc. Even so, that configuration has fallen out of use in modern airports.

Ultimately, this is a solution to a problem that doesn't really exist and a problem which has a more efficient solution that was already widely used.

With respect to your particular question - to some degree, this is exactly how original grass fields were treated. But no matter how convenient, there's always a need for consistency and predictability and you can see how that has developed to what we have now. Taxiing a heavy airliner isn't a trivial task - doing so with no markings or defined route sounds terrifying.

Additional practical issues of your large slab of concrete vs. a defined runway:

To be honest, the list goes on and on and I'd struggle to imagine commercial ops being able to operate like this safely and efficiently.

We have runways for the same reasons that we have roads: 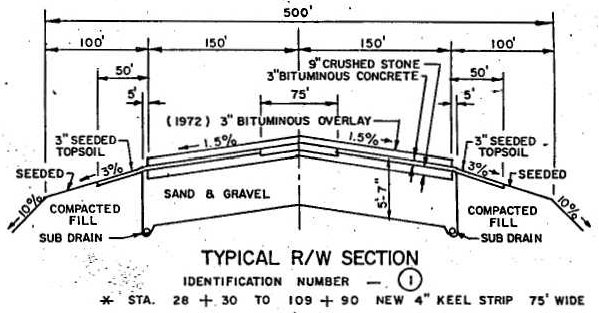 Land costs money and paving it costs money. For a typical commercial airport like Grand Rapids Ford Int'l, your proposed runway would be about 3 square miles, which could easily cost about \$40,000,000 for the land, and another \$20,000,000 to pave it.

Your proposal would have very little benefit; right now, Grand Rapids Ford Int'l has two main runways at a 90-degree angle to each other, meaning that airplanes may have to land at up to a 45 degree angle to the wind. That's almost never a problem.

So your suggestion would cost about $60,000,000 and provide essentially no benefit.

Airfields used to have that, big fields where the pilots could line up and takeoff or land into the best headwind. Might be okay if the field was small, say up to 3000 feet by 3000 feet.

But, where do you set up ground based instruments that help with poor visibility landings (low ceilings due to fog, rain, etc)? Radio antennas, lights, etc. Having it hard installed/wired is the most feasible and durable.

And then once the runways get longer, the sheer size becomes an issue, along with development that seems to spring up around airports over time.

So the runways are fixed, and we learn how to handle the plane in crosswinds.

A large number of answers so far, so I won't cover budgets. But I didn't notice any mention the approach and departure paths. These flight paths must be kept clear of obstacles above a certain geometric plane and the common folk love to purchase land near an airport or race track and then complain about noise so flight paths are designed to minimize trouble with neighbors, also there is risk with a busy airport and aircraft traveling off the ends of the runway. Jet blast also can not be directed at parked planes. Then you have issues with design of instrument flight rules approaches and departures.

In the old days many "taildragger" planes were literally that: the tail dragged on a non-steerable skid. The skid didn't work well for keeping the plane straight on hard pavement. Also some of these planes didn't handle crosswinds well even on grass. So planes took off and landed on wide-open grass fields where pilots were free to take off and land directly into the wind.

Now, almost no planes have tailskids, and most have tricycle gear configurations, and crosswinds are much less of an issue than they used to be. Two runways oriented at near 90 degrees provide an adequate reduction in the crosswind component for most situations. Modern planes, especially airliners, have much heavier "wheel loadings" than the old antiques, and require heavily reinforced pavement. It wouldn't be cost-effective to pave an entire square field or other similar shape in this manner.

Also, as another answer has noted, modern instrument landings and takeoffs need to have elaborate systems to transmit radio beams, along with elaborate lighting systems. If you have such a system, it makes sense to have a runway aligned with it-- though granted, the need for precision would be reduced, as far as maintaining a target course, if you were aiming for a gigantic paved area rather than a runway, and had clearance to land anywhere on it. But if you drifted too far off the intended course, you'd also lose the beam that is giving you vertical guidance, unless the beam is somehow designed to cover a very broad area. Maybe as GPS systems continue to play an ever-more prominent role in instrument landings, the radio beam issue will become less of an obstacle to your idea.

But there are other issues as well. Paving an enormous field also creates environmental problems-- where does the run-off water go? And so on and so forth. On the whole, there is little upside to your idea in the context of modern airline operations, and lots of downside.

Previous posters have given reasons not to use your proposal of designing airports as huge square slabs of concrete with no discernible runway for large airports. I don’t think this would be feasible for small airports, either. I have yet to land at a GA airport that took up a perfectly square plot of land. Most airports are long and narrow. The exception is the few airports with runways set up in roughly “A” or triangle shapes. Or, airports set up with two runways at a roughly 90° angle. It is easier to find and buy/procure land for an airport that is longer than it is wide. And, length is important to have distance for takeoff and landing. A 4000 by 1000 foot area would be more useful than a 2000 by 2000 foot area. Plus, you would have more options available geographically. Then, there is also the issue of where to put the necessary facilities like towers, fuel, hangars, FBO, etc. Placing these along one edge of a square limits the use of that edge or axis for flight operations. If you place the facilities in the center, you limit their access by land based traffic.

Primarily costs. Paved runways cost around $1-2 million per 1000 ft, depending on construction and features. An airport like KATL probably has a quarter of a billion USD invested in the runways, taxiways and reinforced concrete infrastructure alone. In addition if you did make, say, a 2 x 2 mile concrete pad to the standards of a runway, most of this structure would never really get used, making it a colossal waste of money.

Given the high costs and other requirements, it’s easier just to lay out single runways with connecting taxiways and parking aprons.

Something i havent seen in any other answers, ATC logistics. ATC is already considered one of the worlds most stressful jobs, and planes can only land 2 ways on a particular segment of land (and taxi). What you are proposing is a situation where ATCs have to direct planes to land in a specific spot wothout deviation or they risk a collision, whilst not being able to clearly see half the airspace in due to the sheer distance and lack of distance markings.

This is not including the other logistical problems with taxing due to the lack of taxi ways and more importantly hold points. Without taxi ways and hold points getting taxiing aircraft off one ‘runway’ but not on another and other movement procedures would become much harder. Current systems still use taxiways labeled with a small sign on the grass between runways/taxiways etc. What you are proposing is a system with no markings, or 360 sets of markings so they can rotate the active ‘runways’ directly with the wind.

Oversll the confusion and stress as well as the added cost and logistical problems mentioned in other answers would not be worth the small gain from such an airport.

If planes could land from any direction, where could you put the tower? It is higher than the runways, and is an essential part of controlling the movement of planes on ground and in the final stages of take-off, landing, touch-and-go, and other operations.

Other items around an airport like to have elevation, such as radar installations. These would need to respect the flight paths from anywhere to anywhere on the landing plane.

By having specific approach and take-off routes, the region surrounding the runway can be built upon. Otherwise there would be onerous restrictions on development well outside the mega-slab runway.

Not the answer you're looking for? Browse other questions tagged airport runways airport-design or ask your own question.

37
Could you land a large airplane on short circular runways?

24
Why have converging runways?
8
How does Chicago O'Hare's tower sequence aircraft at peak capacity?
10
Why didn't planes land from the sea in the old Kai Tak Hong Kong airport?
8
Why are most runways laid out in a generally East-West direction?
3
Has this "straight through" airport design ever been contemplated?
37
Do any airports have runways or taxiways that cross active rail lines at grade?
28
Why do airports remove/realign runways?
20
Are there any privately owned large commercial airports?
28
Why do airports in the UK have so few runways?
7
Why did KJFK keep using runways 22R/L here instead of switching to 13R/L?