Ask Question
Asked 8 years, 11 months ago
Modified 2 years, 11 months ago
Viewed 15k times
37
$\begingroup$
Want to improve this post? Provide detailed answers to this question, including citations and an explanation of why your answer is correct. Answers without enough detail may be edited or deleted. 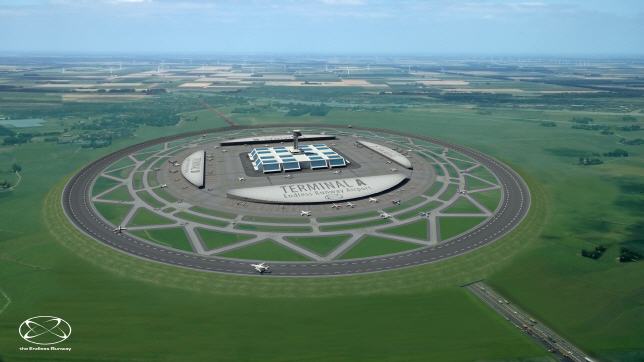 Yes. The "long line loiter" method (see https://en.wikipedia.org/wiki/Pylon_turn ) could be used to lower a weighted line from the airliner to the ground. The line would be retrieved by ground crew and attached to a winch mounted on a turntable on top of a tower in the middle of the runway circle, tall enough for the line to clear all obstacles. The winch would be equipped with a system allowing it to apply constant tension to the line, which could be varied to equal any desired tension. As the airliner descends, the winch would start applying more and more tension to the line, so that the line would provide some of the centripetal turning force, allowing both the bank angle and the turn radius to be decreased, after the manner of a control-line model airplane. By the time the airliner reached the surface, the line would be providing all the centripetal force required for the airliner to stay over the circular track with zero bank angle. As the aircraft approaches the surface, a computerized control system linked to a GPS receiver onboard the aircraft could be used to ensure that the line tension was modulated in such a way as to keep the aircraft nearly over the centerline of the circular track, despite variations in wind speed and direction, and then at that point the winch spool could be locked to keep the line length fixed until touchdown. A similar method, but in reverse, could be used for takeoff, with the line being jettisoned (or simply released from the ground winch and reeled back up to the aircraft) after the aircraft is established in a "long line loiter" turn at the appropriate altitude and bank angle.

27
Why do airports have directional runways instead of a large area to operate in any direction?
18
How to build a 2 mile long runway on a 1 mile square island?

6
Can a 747 land at Ovda?
27
How much force does a 747 land with?
12
What determines the touchdown zone and aiming point markings on a runway?
17
Do large airliners have a short-field landing technique?
4
Is it feasible to recuperate energy from landing aircraft by using a runway sled with regenerative braking?
20
How can an Airbus Beluga fly only with two engines and use short runways?
2
Can I legally land an airplane in in Badwater Basin, CA?
39
Why don't short runways use ramps for takeoff?
27
Why do airports have directional runways instead of a large area to operate in any direction?