How does Chicago O'Hare's tower sequence aircraft at peak capacity?

This older question asks at what interval planes take off and land from ORD. The accepted answer (one takeoff or landing every 30-40 seconds) jives with my math: 2416 operations a day on average, with winds in a non-cardinal direction all those flights must use just two runways, so worst-case each runway would have a plane rolling along it every 75 seconds round the clock (so a plane takes off or lands from somewhere in the airport every 37.5 seconds).

My question is, how? At that rate, approaching planes would be spaced a scant two and a half minutes apart, and as soon as a landing plane passed over the numbers, a departing plane would be told to line up, then to take off as soon as the landing plane had cleared the runway, and if they hesitate even a few seconds the plane behind them would have to go around. How is this traffic density maintained long-term, especially since, like any airport, it has peak periods of activity exceeding the average?

Follow-up question; is ORD as bad as it gets, or are there "denser" airports with lower total aircraft movements but fewer runways? I heard Heathrow is so bad its airspace is ICAO Class A, prohibiting VFR flights entirely, in part due to the fact the airport handles practically every international flight into London on just two runways.

Chicago runs simultaneous triple parallel approaches. And as soon as an aircraft clears the runway, another one is allowed to cross the threshold.

Chicago Tower actually does not do the bulk of the sequencing of aircraft. Chicago TRACON actually sequences the aircraft before they are handed to the Tower. Even before that, Chicago ARTCC begins to sequence inbound aircraft. Similarly, aircraft are handed to departure (TRACON) almost immediately after taking off. Departure procedures are optimized for safety and efficiency.

This figure breaks down runway usage percentage for arrivals and departures in April 2015 (7am - 10pm traffic)(source paper). It highlights the common westbound landing flow with triple parallel runways. You can also see two diverging runways used for the bulk of departures, with sporadic usage of others. 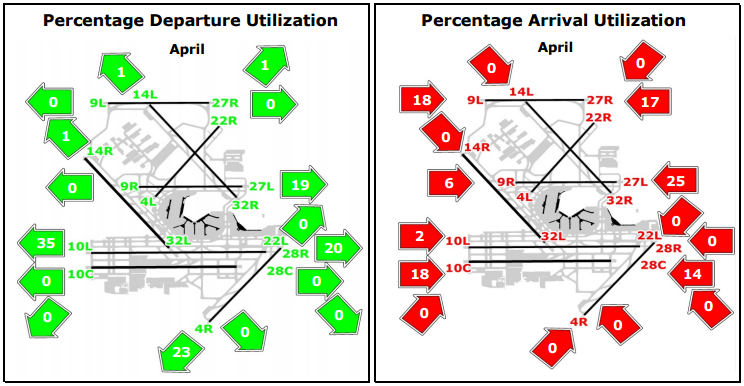 Note that this is all after an airport runway overhaul. Consider that 2014 saw almost a 10% decrease in operations from the year 2005. Having talked to controllers that have put in time at Chicago Tower, it is as crazy to handle as humanly possible.

20
What are the most efficient layouts of multiple runways?
8
At what intervals do planes land and take off from Chicago O'Hare?
1
What are normal landing separation minima?

15
How do airplanes get stacked in a holding pattern?
17
How often do runways need to have typical maintenance?
8
What do they use to de-ice aircraft and runways on snowy days?
9
Why would an airport use crossing runways for takeoff and landings?
3
Why do my flights always use runway 24L at LAX airport?
3
How does passenger unloading order prevent plane tipping?
10
Why didn't planes land from the sea in the old Kai Tak Hong Kong airport?
9
What happens to en route flights when a major earthquake etc. destroys facilities?
15
How can I read airport maps when choosing a seat as a passenger?