Do Alaskan bush pilots generate a Clmax of 5 with 90° flaps?

I understand the Alaskan bush pilots use 90° flaps in the Valdez STOL competition. I think this would stall the flaps. And if so, it wouldn't increase lift and reduce stall speed, but Javafoil says the opposite.

Perhaps this is more for lift/lower stall speed than drag. Since they land flat halfway down a long runway they don't need drag to slow down.

Is this realistic? If not, what is the real Clmax?

The following graph is from Cahill, Summary of Section Data on Trailing-Edge High-Lift Devices. As you can see, for a plain flap, with gaps fully sealed, the $C_{L_{max}}$ maxes out at around 60deg. 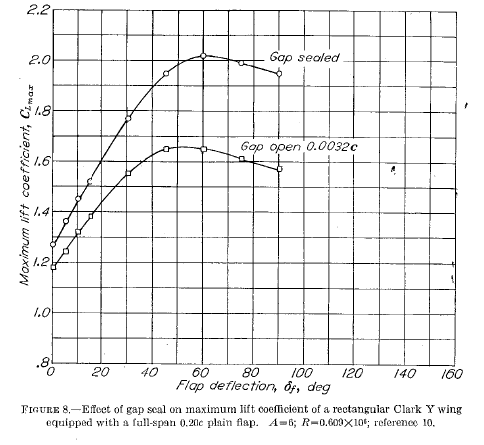 When I played around with xfoil, things became unreasonable beyond 40deg. Probably some assumptions in the boundary-layer equations broke down. Since Javafoil utilizes the same computational approach as xfoil, I would expect the same behavior.

On the Alaskan Bush pilots, are we sure they are 90deg deflection, and not just some high deflection that looks almost vertical? With multi-element, slotted flaps, you can do better than plain flaps.

8
Is the low air pressure on top of the wing the major contributor to lift?
1
How can I calculate CLmax for a wing with multiple airfoils?
7
Why does the A320’s maximum allowable aileron deflection decrease, rather than increase, when the flaps are extended?
0
New Research: VGs increase lift to drag ratio up to 880%. Does it work for flaps too?
2
Cascading Wings: Do they really increase lift by 300%?
0
What is the total EXTRA lift produced using an 80 deg flap and distributed propulsion?
2
Would plain and slotted flaps increase lift substantially in a distributed propulsion application?