What are the different variants of ILS intrumentation?

Background: I'm a huge aviation enthusiast with a lapsed PPL. Have flown some larger aircraft on MSFS, but never flown anything in real life bigger than a C172.

I was lucky enough to do a bit of Simulator time on a B737 simulator this weekend. One thing I wanted to try out was an ILS approach in very limited visibility. The instructor set me up, and asked what ILS display I was "used to seeing". I described it, and she set it to this - totally what I was expecting: 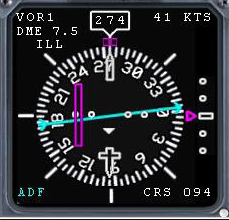 So, my question is, what was the "Other" option? This may be specific for a B737, or it may not. Why are there 2 types of instrumentation for an ILS approach? Is one a newer system, and is it therefore preferred.

In the Boeing next-generation "NG" flight decks, the PFD can be configured one of two ways. The first way, is the default presentation, where you only see to top of the HSI. The pilot will fly the aircraft via the pips along the bottom and right of the attitude indication (and usually with the flight director cross as well): 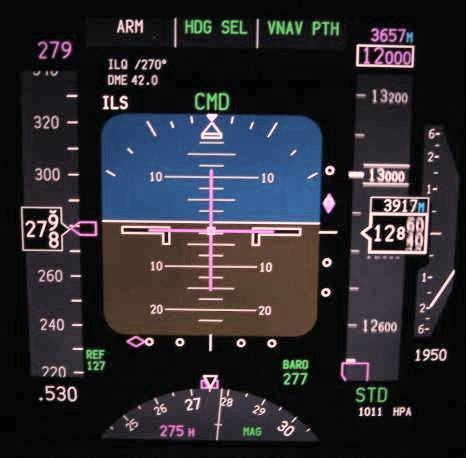 If my memory is correct, Boeing, NASA, and others did a number of human factors studies over the years and found that this layout allowed pilots to more quickly understand critical flight information, and this layout is now standard even in GA glass cockpits (e.g. Garmin G1000, Collins Proline).

This configuration is primarily used for airlines that are transitioning between "Classic" and "NG" flight decks. One airline I remember in particular is Southwest, as they had a combination of 737-300/400 and -700/800 aircraft and having a classic configuration on their new flight decks allowed all of their pilots to fly any of the aircraft, without needing significant differences training. The particular presentation can be customized per the airline's needs. An airline will typically move exclusively to the modern PFD display once all of the older aircraft are moved out of the fleet.

That would be the double needle display. Here are the 3 most common displays:

The one on the left is the one you are used to.

Not the answer you're looking for? Browse other questions tagged flight-instruments boeing ils or ask your own question.

16
What is different between a Cat IIIA, Cat IIIB, and Cat IIIC ILS approach?
7
What is the difference between the ILS Critical Area and the ILS Sensitive Area?
3
What are the lowest authorized minimums for each ILS category?
9
What is the purpose of having different ILS categories?
6
On an inverted aircraft, is the ILS glide slope sensing reversed?
4
What are the differences between each ILS category?
5
Why are the minimums between these two ILS instrument approaches to the same runway so different?
1
Do any aircraft have a “self-contained ILS”?
8
How do preceding aircraft affect the ILS signals?