What is the purpose of having different ILS categories?

What is the difference between CAT I, II and III ILS approaches? I understand that the different categories are used in different weather, but what are the differences, exactly? Do flight crews have to act differently when flying a CAT III approach as opposed to, say, a CAT I approach?

Instrument landing system - ILS - is a very common precision approach system used in airports around the world. An ILS consists of two ground antennas and an airborne received in the aircraft. One of the ground antennas, known as a localiser, transmits a narrow beam along the runway, giving lateral guidance to aircraft approaching the runway. The other antenna, the glide slope, transmits a vertical beam at a specified angle, giving vertical guidance for aircraft approaching. Together, the localiser and glide slope provides aircraft with an exact path to follow toward the runway.

The main advantage of ILS is that is allows approaches and landings in poor weather conditions. Pilots do not have to visually see the runway until moments before touchdown, because the ILS can guide the plane down very precisely. However, there are different standards of ILS. These are named CAT I, CAT II and CAT III (CAT III has three additional substandards: CAT IIIa, CAT IIIb and CAT IIIc).

For a CAT II approach, the ceiling must not be lower than 100 ft and the visibility not less than 350 metres.

CAT IIIa has a minimum ceiling of 50 ft and a minimum visibility of 200 metres.

CAT IIIb has no minimum ceiling, but there must be at least 50 metres of visibility.

For a CAT IIIc, which has not actually been implemented anywhere, there are no minimum limits for ceiling and visibility.

As you can see, CAT II or III approaches allow pilots to land is extremely bad weather conditions.

So if CAT III is so great, why don't we use it all the time?

In order to use CAT II/III approaches, a number of conditions have to be met: 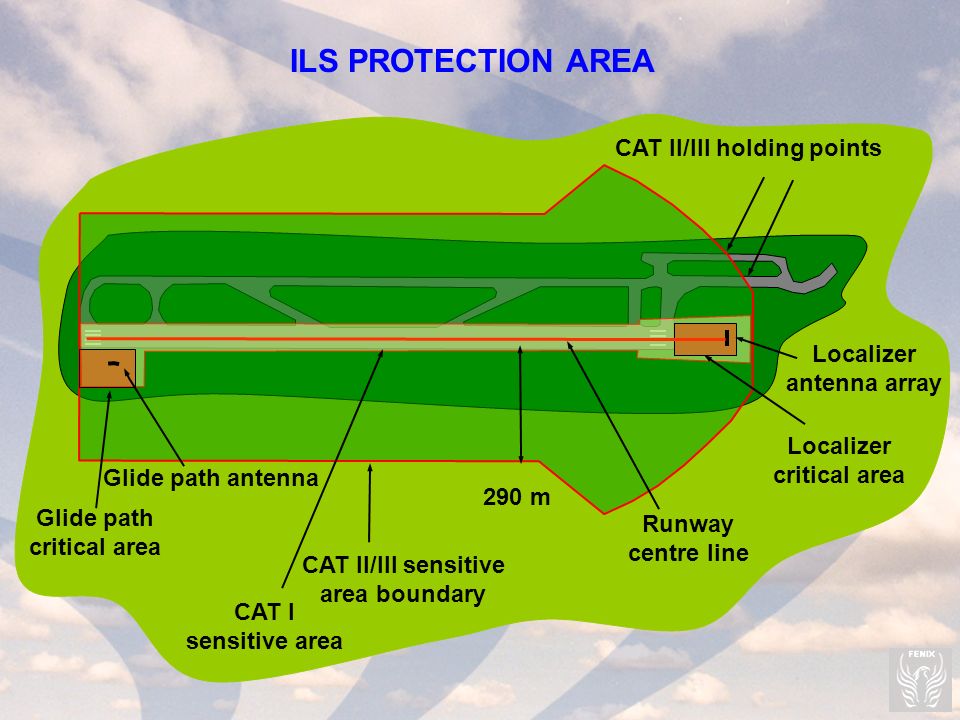 An example of ILS sensitive/critical areas at an airport 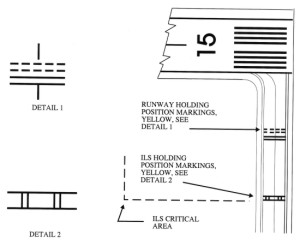 We also need additional space between two aircraft approaching the same runway. This is because the first aircraft, once landed and on the runway, can block parts of the localiser signal for the following aircraft. Because of this, the first aircraft must be clear of the runway by the time the second aircraft joins short final. This means we need extra space between aircraft, resulting in a reduced runway capacity.

As you can see, there are a number of factors limiting the use of CAT II/III approaches, which is why they are only used when the weather is so bad that CAT I approaches cannot be carried out.

9
What's the point of having ILS on runway signs?
3
What are the lowest authorized minimums for each ILS category?
1
How does an Airport decide to change CAT status - what ground equipment is required for CAT I / II / III
2
What are the operational differences between the ILS CATs?

16
What is a monitored approach?
10
Why would the USAF have no support for autolanding?
4
How do you choose CAT II vs. CATIII ILS?
14
What are the differences between Cat I, Cat II, and Cat III as concerns aircraft requirements?
5
Why are the minima for Cat A higher than for other categories at KSEA ILS 16L?
5
What are the differences between each ILS category?
5
Do different planes (category) aim differently in the 'final stages before flaring'?
7
What would a Category II ILS approach require that a Category III approach wouldn't?