What aircraft has the highest suggested landing speed?

Just out of vague curiosity, what aircraft has the highest recommended landing speed for an earth bound (atmospheric) craft? And, btw, when I say "landing" I define it as thus:

I know there may be multiple answers, even with my trying to narrow it down, so feel free to list a few different scenarios. I'm mostly wondering about planes that are in common usage though, both military and civilian (past and present)... I'd have to think something like the SR-71 or MIG-25 would be very close to the top of the list, if not the top.

Based on its fixed-wing hypersonic design and inordinately high wing loading, I would predict that the X-15 has the highest recommend landing speed of any earthbound aircraft, with a preliminary search seemingly bearing this hypothesis out. According to an ostensibly legitimate NASA source (link below), the X-15's normal landing speed was 200+mph (173.8kts=321.9kph),

But if unofficial sources are to be believed, its actual landing speed was much higher, closer to 390kph=208kts (although these numbers are admittedly more dubious):

“According to an early edition of 'the Guinness book of world records' the X15 also holds the record for fastest landing speed at 242 mph compared with 210 mph for the space shuttle.”

If only powered aircraft are open to consideration, then the F-104 Starfighter would have to be up there as well. It needed a blown-flap flow control system just to be sane during landing...

“To make landing speeds “reasonable,” The F-104 forced engine air through the wings to smooth the airflow and give more lift. With bleed air, the Zipper could land at the challenging but not extreme speed of 160 to 165 knots. If the air-bleed system was not working, landing speeds climbed to 240 knots.”

So, if mechanical failure scenarios are deemed admissible, then the F-104 without its crucial boundary layer control systems would be the clear winner for powered landing speed, weighing in at an absolutely terrifying 240 kts. Otherwise, it would appear that the X-15 (unofficially) reigns supreme.

And the B-58 Hustler
http://www.aviation-history.com/convair/b58.html says it had a touchdown speed of 165 KIAS. Which would lead to an approach speed even higher than that of the F-102.
http://wikimapia.org/7029449/Important-B-58-landing-approach-aid says it landed at "just under 200 knots", even higher then unless they mean approach speed rather than touchdown speed.

The XB-70
http://www.nasa.gov/centers/dryden/pdf/87774main_H-587.pdf mentions an approach speed of 200-210KIAS, with touchdown at 175-185KIAS.
And that for a lightly loaded prototype, the production machines would have been heavier...

So that may well be the top candidate for the job (excluding non-normal operations), if we exclude the X-15 and Space Shuttle which were gliders during their landing phase.

Concorde's landing speed was 300 km/h. Its high speed was due to its small wings, designed for supercruise, which required higher airspeeds to maintain lift during the approach. Possibly the XB-70 Valkyrie, being also a large supersonic aircraft, would have had higher landing speeds, but I can't find a reference for its landing speed.

The Space Shuttle regularly landed at 350-400 km/h under control, though without power. 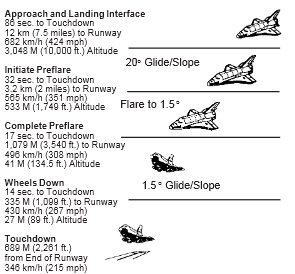 The USAF 101-B (ADC)did fly final approach at 175 plus fuel...it also had a 300 foot altimeter error subsonic at most landing altitudes! This was an all-weather interceptor! I will never forget landing at Kingsley fold, Klamath Falls, OR,at night, in a rain storm wth my rain clearing system inop!

Not the answer you're looking for? Browse other questions tagged aircraft-design landing or ask your own question.

11
What is the record for the highest achieved landing speed?

34
What is the procedure for landing on an aircraft carrier?
10
What vertical speed at touchdown makes a 'perfect' landing?
9
Which aircraft endure the highest Max Q's (aerodynamic pressure)?
11
What is the record for the highest achieved landing speed?
19
What is wrong with a high-speed landing for an ultralight or GA aircraft?
0
What flying boat has the highest maximum takeoff/landing sea state?
1
What was the lowest ground speed landing?
4
Can aircraft stall at low speed during final landing?