Can aircraft stall at low speed during final landing?

Is it possible for an aircraft to stall when it turns multiple times before landing and its airspeed is below 200mph? And if it does, is there any way to recover at such low height and speed? I always get nervous looking out the window and feeling that 1.5g in my seat during landing.

When you learn to fly one of the first things that you learn is that recovering from a stall at low altitude is rarely successful. So we go up to at least 1,500 Above Ground Level (I like to go even higher) and we practice putting the airplane into a position just before it stalls—the stall warning light goes on and the wing begins to buffet. Then we use appropriate power, ailerons, and rudder to recover from the stall. Every pilot is tested on this before they receive their pilot’s license. Commercial pilots and air transport pilots are tested again with higher standards than private pilots. The idea is that you know the conditions that result in stalls and avoid getting into that situation. If for some reason you do stall the airplane, your training should kick in and you should be able to recover.

Unfortunately, many general aviation pilots get distracted on final approach and there are frequent stall-spin accidents in light airplanes. They are extremely rare in the airlines. The only one that comes to mind is the Colgan Air accident in 2009 where the plane iced up and the pilot flying ignored the stall warnings and pulled up on the stick instead of pushing the nose down and adding power.

We are taught that a stall can occur at any airspeed and any pitch if the airplane exceeds the critical angle of attack. There are lots of ways you can do that but the two most common are banking and icing up the wing. The Colgan Air crash is an example of the later. When the wings are iced up they do not provide as much lift as when they are clean. In order to keep the plane level you need to increase the pitch. This increases the angle of attack and at some point the wing exceeds the critical angle of attack and the plane stalls.

I am not aware of any recent airline accidents related to stalls while banking but there are plenty in light aircraft. An unfortunate series of events resulted in a stall spin accident in a Cirrus at Houston’s Hobby airport in 2016. 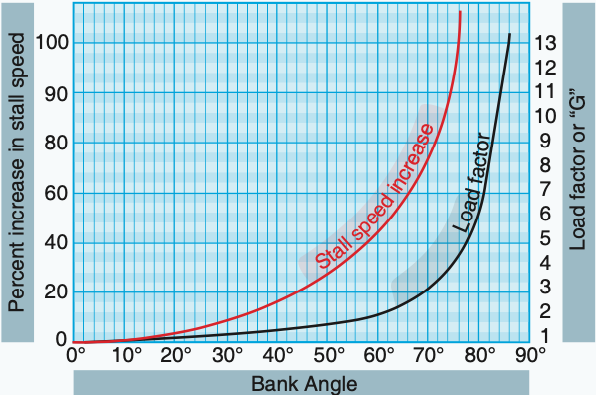 One of the maneuvers that we must master to get our Commercial license is steep turns of 50°. My Cherokee has a stall speed of 55 MPH in the approach configuration. The stall speed at a 50° bank angle is approximately 1.28 times 55 = 70 MPH. For me to successfully do a steep turn, I need to enter the maneuver at an airspeed of greater than 70 MPH.

Another maneuver that we must master is an accelerated stall. In this case we start out at our approach airspeed (in my Cherokee it is 80 MPH) and we bank to 45° and then pull up on the yoke. As you can guess from the discussion above, the airplane almost immediately stalls and then we recover from the stall. The reason we practice this maneuver is so that we don’t do this when coming in for a landing.

What causes pilots trouble is forgetting that your stall speed increases dramatically in a steep turn. Suppose you are turning to line up with the runway and you underestimate the wind and it blows you past the runway centerline. The natural reaction would be to steepen the turn. But when you steepen the turn you change the vertical component of lift so you start to sink toward the ground. If you pull up to get away from the ground you lose airspeed as well. So now you’ve increased the angle of attack past the critical angle of attack. The airplane stalls and if you weren’t coordinated with the rudder (which is often the case) the airplane enters a spin. This close to the ground they are rarely recoverable.

Stalls occur because the airplane exceeds the critical angle of attack. In most normal flying the angle of attack is directly related to the pitch and bank angles and the airspeed. We are taught how to avoid stalls in our primary training and when we get our refresher training every two years. We still manage to mess it up. Airline pilots receive much more training than we do and it is reflected in the accident statistics.

Every aircraft has a stall speed, usually landing above stall speed. When an aircraft stalls, this means the aircraft no longer generates lift to keep it in the air and falls down from lost lift. This doesn't occur in everyday landings. If an aircraft were to stall, the pilots made gross errors in flight landing configurations, unexpected large wind gusts were encountered, a microburst occurred during the landing phase or the aircraft systems failed. At approach or landing speeds, if a stall occurs, aircraft may not have enough altitude to recover where dropping the nose to dive will increase airspeed above stall speed to regain flight control. Either the airplane crashes or lands with damage to landing gear or more severe damage occurs. Virtually every commercial aircraft never flies at or near stall speeds when landing from training and familiarity with each airplane. When done correctly, pilots carefully manage airspeeds during every phase of flight as professionals.

Not the answer you're looking for? Browse other questions tagged landing stall or ask your own question.

36
How does stall depend on angle of attack but not speed?

35
Why would a Cessna 182T not enter a stall?
14
How do planes descend for landing?
20
Is it better to shut down the engine(s) or leave it (them) running when a gear up landing is imminent?
4
Why disable stall warning based only on low airspeed, rather than multiple criteria?
1
What's going on with sudden acceleration/deceleration in mid-air?
1
How do aircraft stall warning systems handle (or not) asymmetric-stall situations?
7
Why do aircraft stall warning systems use angle-of-attack vanes rather than detecting airflow separation directly?
8
Is there a deterministic guide to landing?