How does scaling of UAV size impact range?

Lets say you have two autonomous small aircraft, one with a wingspan of 200 cm and one with 400 cm. Both have the same general design. They are both optimized for travel distance on one full tank (gas tank size, engine size, optimum speed, etc). Which one has greater range?

In other words, does it help to be large or small if you want to make a travel distance record?

If you compare geometrically similar aircraft, the larger one will have more range.

First, its volume grows by the third power while areas grow only with the square of its scale, so wing loading will be higher for the larger aircraft. This will translate into a higher cruise speed, because the range optimum dictates an optimum speed for each aircraft. In a first order approximation, an aircraft of twice the size will fly at 1.41 times the speed of a smaller aircraft. The much higher internal volume will allow it to carry much more fuel, but even when the fuel fraction for both designs is kept constant will the larger aircraft fly farther.

If we restrict fuel to the same fraction of total mass, the exponent for mass increase is slightly above 2. All surfaces grow by an exponent of 2, but the stresses would be higher in a linearly scaled structure, so the structure of the larger aircraft needs no be beefier. An exponent between 2.2 and 2.3 has been found to best represent reality. This means that doubling dimensions will result in a mass increase by a factor of 4.76. In order to fly at the same polar point, the large aircraft needs to fly at 109% of the speed of the small aircraft.

In a more detailed analysis, we need to first look at the installed power: If we focus on piston engines and scale the engine in the way we scale the aircraft, for a size increase by a factor of two will the displacement grow by a factor of eight while the engine speed will decline by a bit less than a factor of two. The smaller engine will have higher friction, thermal, sealing and combustion losses, so it will have a noticeably lower efficiency. If we just look at statistical data, power output grows slightly less than linearly with displacement: 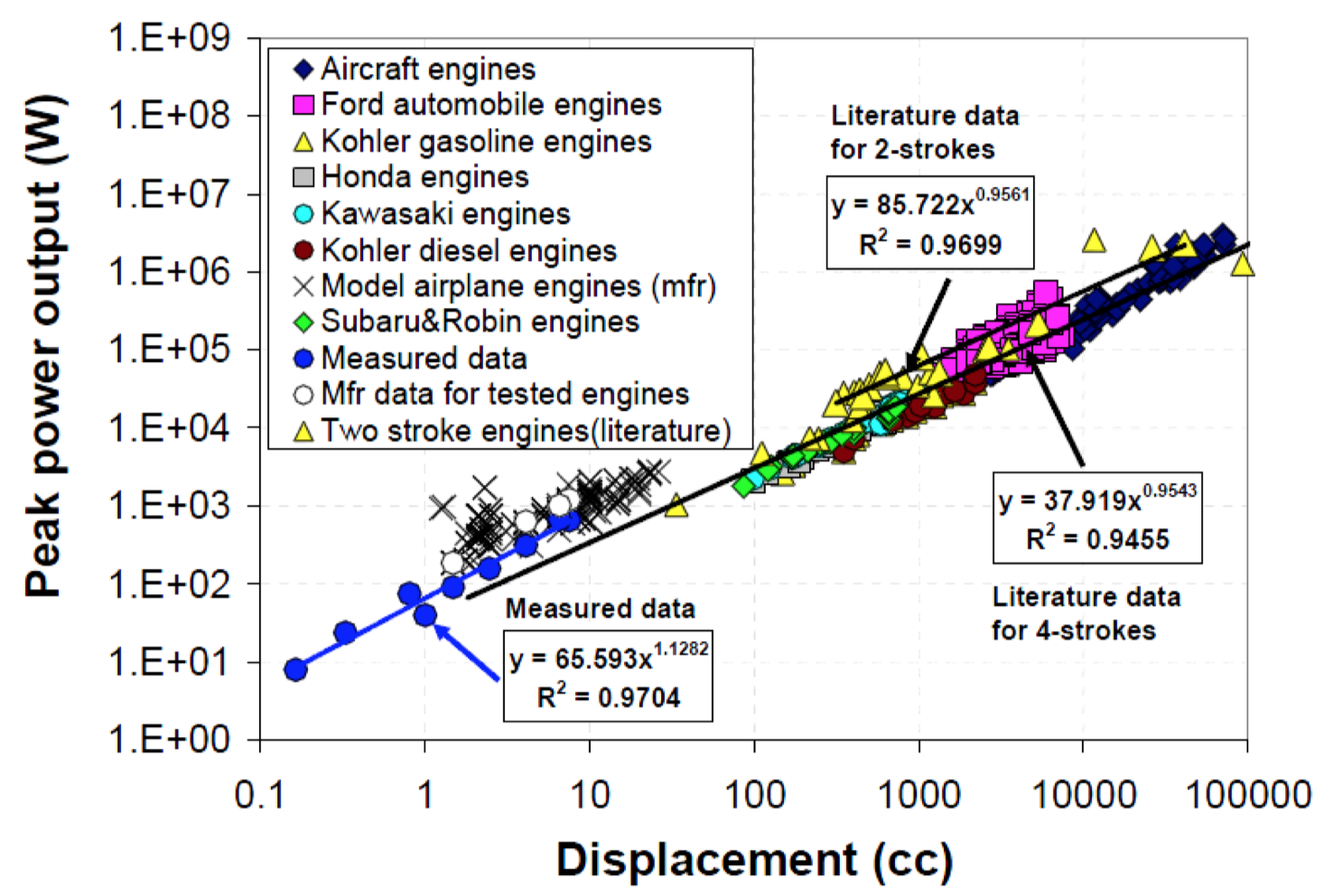 Next, we need to look at Reynolds number effects. The larger aircraft will fly at a higher Reynolds number for two reasons: Increased length and increased speed. Together, a doubling in length will translate into a first-order Reynolds number increase by a factor of 2.18. The coefficient of friction will scale with Re$^{-0.3}$, so doubling the length of an airplane will reduce the friction coefficient of the large airplane to 79% of that of the small airplane. This will not only affect total drag, but also the polar point for best range. Since the optimum lift coefficient is proportional to the square root of zero-lift drag, the optimum lift coefficient for the large airplane will only be 89% of that of the half-size airplane and cruise speed will be higher by a factor of 1.225. This means that dynamic pressure is higher by a factor of 1.5.

Ideally, this calculation needs to be iterated, but for now I keep it at one iteration step.

This higher dynamic pressure now needs to be multiplied by the increase in reference area to arrive at the zero-lift drag: 1.5 times 4 times 0.79 means that doubling the size will let zero-lift drag grow only by a factor of 4.74. Since zero-lift and induced drag are of the same size at the optimum cruise point, the same factor applies to the total drag. The required power, however, is proportional to speed, so doubling the size will increase the power demand by a factor of 5.78. This is well below the power increase from a scaled-up engine, so the larger aircraft actually needs a proportionally smaller and lighter engine, leaving more reserves for fuel. Or it can scale up the engine linearly and load proportionally more fuel.

Fuel consumption is proportional to engine power, but we get another advantage from the larger engine: Its specific fuel consumption will be slightly better: 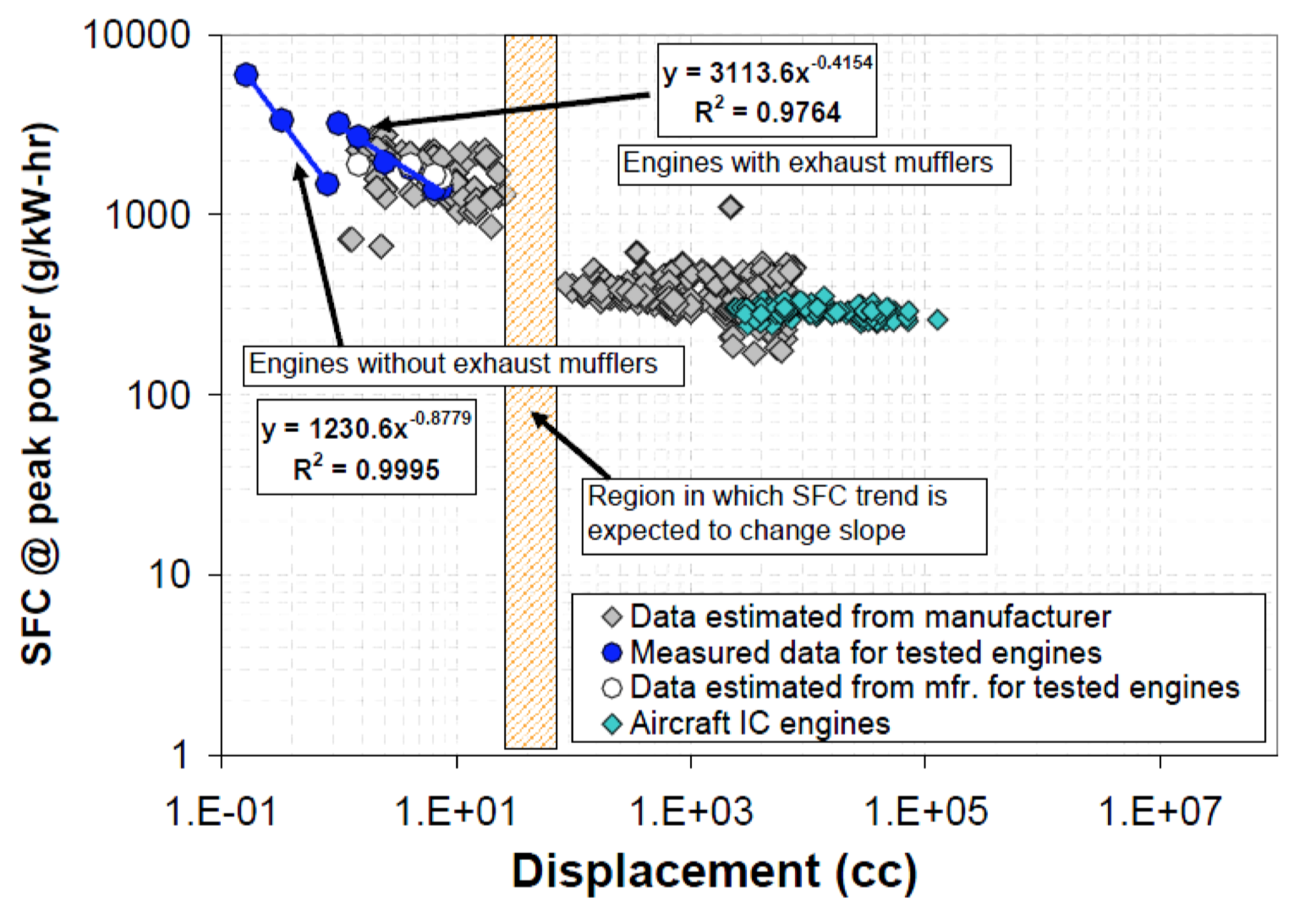 Specific fuel consumption over displacement (same source as figure above).

In sum, the larger aircraft will

This 70% longer flying time coupled with the then 24% higher cruise speed will leave the smaller aircraft in the dust.

Endurance and range of an aircraft has nothing to do with physical size, but rather with performance, fuel consumption and fuel capacity (assuming calm winds). One problem with assuming that scaling up will give you more range is that you also have to get bigger engines as part of the upscaling, and additional fuel consumption may negate any other advantage of scale, such as larger fuel tanks.

All else being equal, a larger span will provide an advantage in the form of less induced drag.

That being said, in the real world one cannot arbitrarily increase span without paying a weight penalty, in this case because more structural weight will be required to support the larger bending moment of that span, so whether going from $200cm$ to $400cm$ will be worth it is unclear without the rest of the numbers.

As for your subquestion, it helps to be large enough to carry your powerplant and energy storage systems, which don't scale in the same manner as the airframe and thus impose an initial design requirement. If you review some of the range or endurance record-setting designs, you will see they have one theme in common: they are built around their powerplants, with little weight and space devoted to other systems.

One factor in scale that is yet to be quantified is drag penalty from pitch oscillation. This is why glider designs (and birds) have retained their horizontal stabilizers. Unless an aircraft has a very sophisticated computer sensor (these always work perfectly, right?) and control system, the H stab remains a vital part of pitch control.

Mass also plays a role in minimizing pitch oscillations caused by wind turbulence. Heavier means slower acceleration a = F/m in response to a gust. Similar the increased comfort of driving a very heavy truck down a bumpy road compared with a light car. Increased mass to surface area ratio of the larger aircraft acts as a more efficient damper of wind effects.

These factors, along with the Reynolds drag reduction Peter mentioned, work in favor of the larger aircraft.

But do not stop at 200 to 400 cm scale comparison. Take it all the way up to the Convair B-36. Before air to air refueling become practical and commonplace, these intercontinental giants were unmatched in range and endurance.

Not the answer you're looking for? Browse other questions tagged aircraft-design aerodynamics aircraft-performance unmanned-aerial-vehicle aircraft-physics or ask your own question.

18
How strong is the A380 fuselage-wing joint?
31
How does wind affect the airspeed that I should fly for maximum range in an airplane?
11
What are the physical laws for upscaling an RC model to 1:1?
8
How does Reynolds Number affect skin friction drag?
1
Will increasing the wing area result in higher aircraft range?

6
How does take off mass impact induced drag?
5
Does a 1lb crow expend only 7.68 Watts to fly at 37 km/h?
11
About climb: If we use T/W as input, the second grade equation yields two solutions for W/S. Are both solutions realistic?
3
Is this scaling of aircraft size and power (at least roughly…) correct?
6
Under which conditions is full rated power instead of METO power required for takeoff (DC-3/C-47 with Pratt&Whitney 1830 twin wasp engines)?
4
Why does the European MALE RPAS UAV use twin engines?
1
Why don't nonrigid airships have multiple gas cells?
13
Can the plane Celera 500L be eight times more fuel efficient than a jet of similar size and capacity?
4
Why this inertial regulator of dragonfly wing pitch reduces self-excited coupled flapping and feathering vibrations and improves gliding flight speed