How does wind affect the airspeed that I should fly for maximum range in an airplane?

I have heard that wind affects the actual airspeed that I should fly for maximum range in an aircraft.

I understand that wind will not affect the airspeed that I should fly if I am looking for maximum endurance, but what about maximum range?

How (and how much) should airspeed be adjusted for wind in order to get maximum range?

My answer was rather concise first, and I got the impression that I need to elaborate the question first. The question is about the best airspeed for maximum range. With wind. Best range means you cover the most distance while the wind is carrying the plane with it. If you have a headwind, the longer you stay aloft, the more you are carried back, so you better hurry up. With a tailwind, it helps to slow down because now the wind is helping you to cover even more distance.

But how much? We need to pick that particular speed where the change in fuel consumption just balances the change in speed over ground. I always found that easier to explain with gliders, and there you can really observe which polar point is best. Just picture yourself as an observer on the ground who sees the plane fly by in the distance. If you plot a line with the combination of positions and altitude, there must be one flight speed that produces a line where the flight path angle is the shallowest. This is the desired optimum. That has only little to do with optimum L/D - this is just one other point you can find with a sink speed polar. And it happens to be the point for best glide in still air. But there is so much more that humble polar will tell you, if you look at it the right way.

With powered aircraft you need to pick the polar point where your fuel flow is lowest for the given speed over ground. Basically, you fly like the glider and add enough power to stay at the same altitude. That is all the difference. User2168 has answered that part already with a graphical solution.

OK, now back to gliders. Please look at the plot below which shows airspeed on the X axis and sink speed on the Y axis. 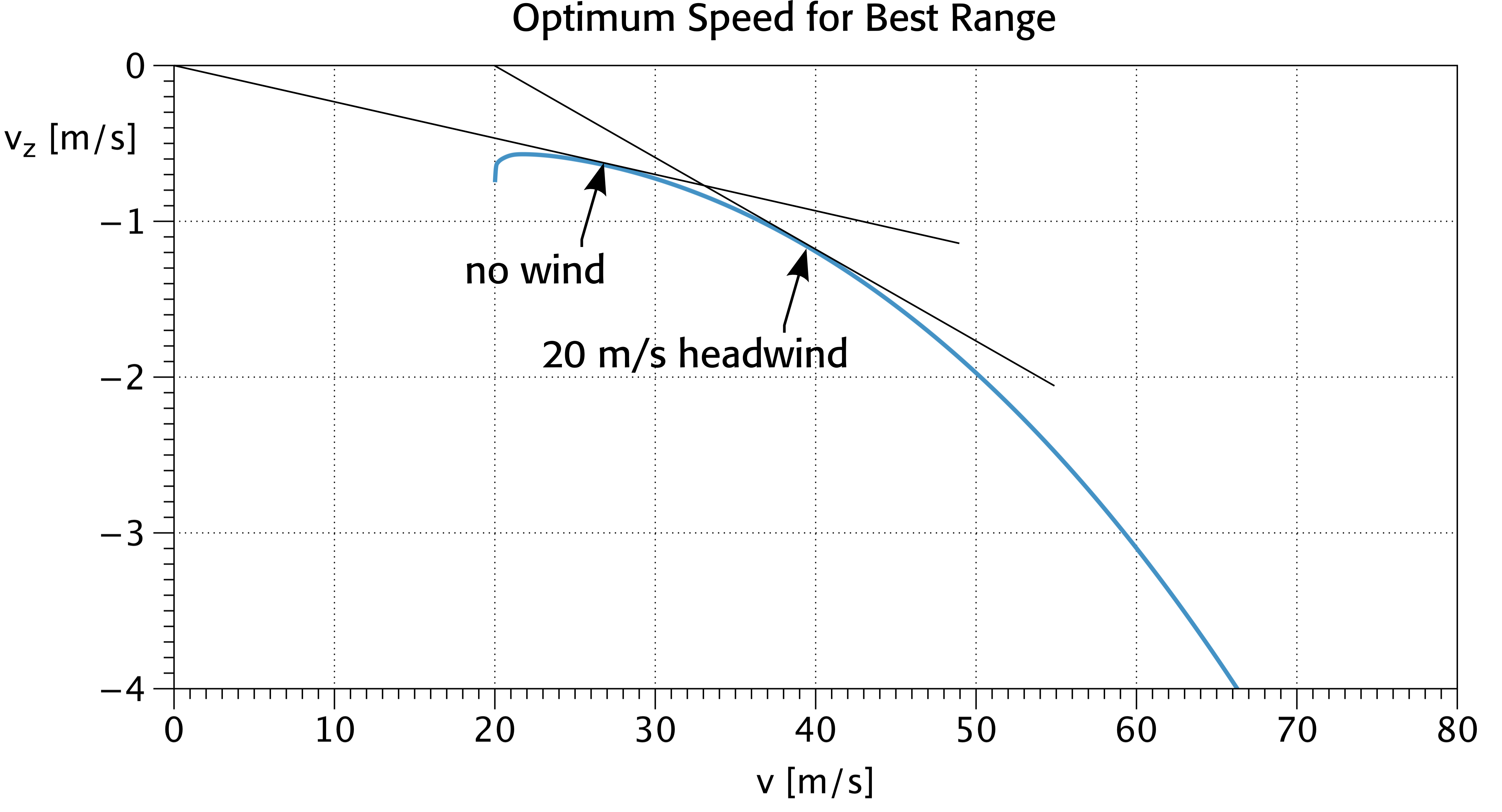 The solution is graphical: You start on the X-axis at the point which corresponds to the wind speed and put a tangent on the sink speed graph. Where the tangent touches the sink polar (blue line), the plane flies at the best L/D for that given wind speed. Move the starting point to positive speeds for headwind and to negative speeds (not shown here) for tailwind. If the term "best L/D" is already reserved in your mind, please read this as the "best polar point". It is really the same.

Since User2168 has beaten me to the graphical solution, I will add an analytical solution.

For powered flight things become more tricky, because thrust changes with speed. To simplify things, we can say that thrust changes over speed in proportion to the expression $v^{n_v}$ where $n_v$ is a constant which depends on engine type. Piston aircraft have constant power output, and thrust is inverse with speed over the speed range of acceptable propeller efficiencies, hence $n_v$ becomes -1 for piston aircraft. Turboprops make some use of ram pressure, so they profit a little from flying faster, but not much. Their $n_v$ is -0.8 to -0.6. Turbofans are better in utilizing ram pressure, and their $n_v$ is -0.5 to -0.2. The higher the bypass ratio, the more negative their $n_v$ becomes. Jets (think J-79 or even the old Jumo-004) have constant thrust over speed, at least in subsonic flow. Their $n_v$ is approximately 0. Positive values of $n_v$ can be found with ramjets - they develop more thrust the faster they move through the air.

Now for fuel flow: This goes up and down with the power output of the engine. Again a simplification, but it helps to get to grips with the problem and gives useful results. This lets us re-formulate the problem as: At what airspeed do I have the best ratio between power and ground speed?

Mathematically, we want to fly with $\frac{P}{v_w+v}$ at the lowest possible value. $P$ is the power, $v_w$ is the wind speed and $v$ the airspeed. To express the thrust behavior over speed, I break P up into a product of a constant $K_S$, the throttle setting $\delta$ and the speed like this: $K_S\cdot\delta\cdot v\cdot v^{n_v}$. Here is the general solution, pasted as a PNG to save me all the typing in the editor: 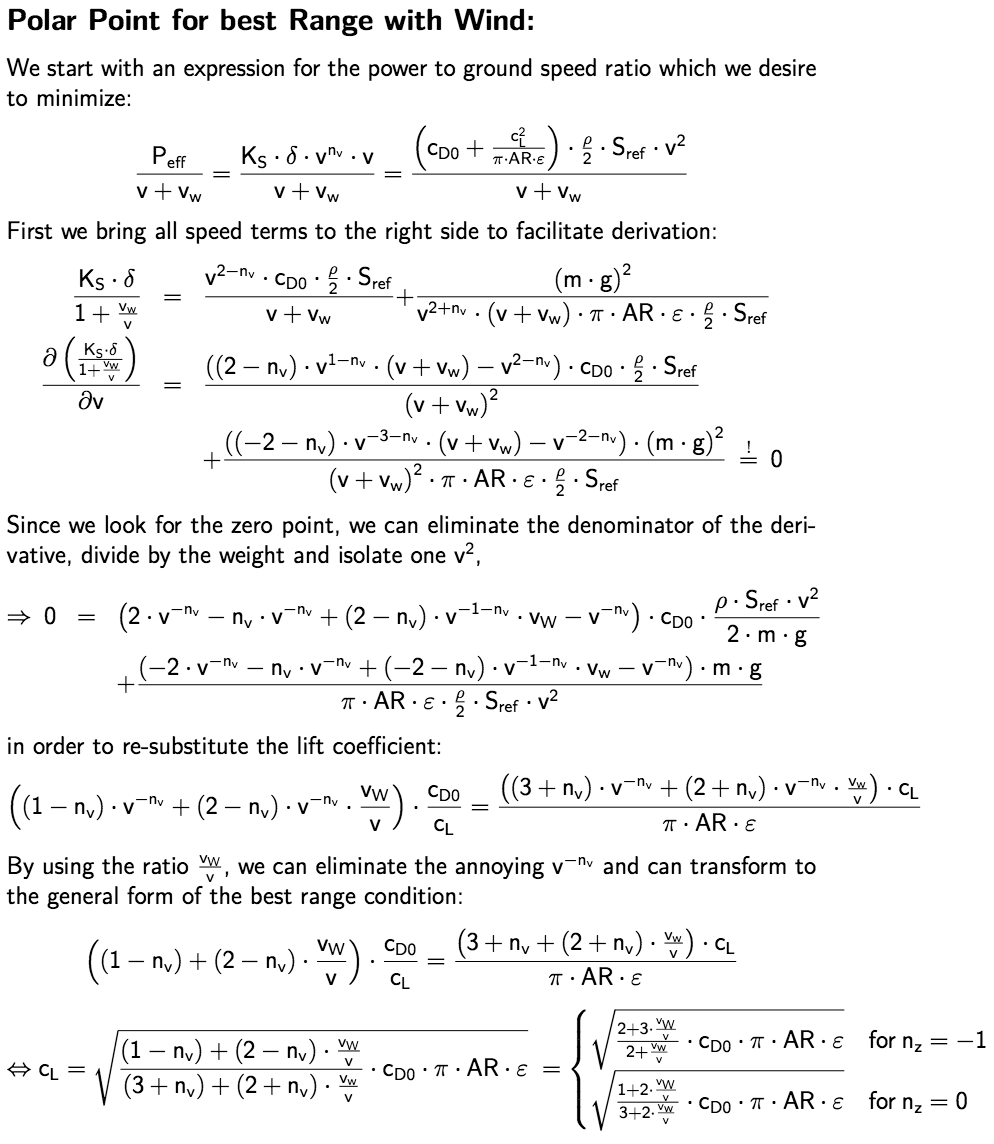 Please note that implicitly the lift coefficient is on both sides of the equation. To solve it, you need to do it recursively, until speed and lift coefficient match. I took this form because of the similarity to the general form at still wind which can be found in many performance books. This here I didn't find anywhere, and it took me a while to figure it out. Thank you, Lnafziger, for the excellent question! It gave me a chance to learn something.

Now I have put the results into a plot. In order to eliminate the aircraft-specific parameters, it shows the ratio of $c_L$ with wind over $c_L$ without wind. The plot is metric, but will work for all units if you use the same units for wind speed and air speed. 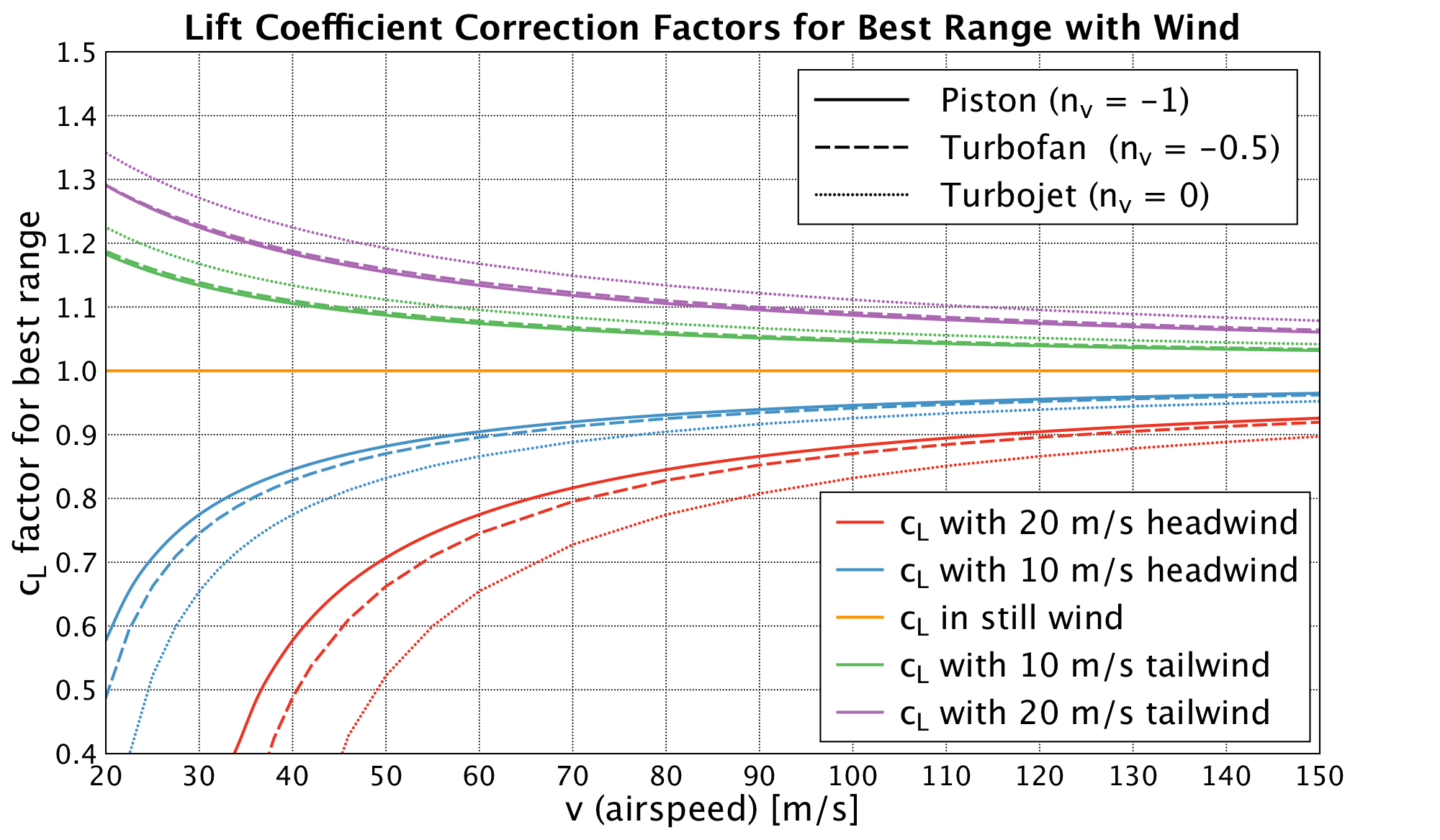 To give an example for the application of the correction factor: If you are flying in a 20 m/s headwind and your best range speed at still wind is 50 m/s (approx 97 kts), the $c_L$ needs to be 70% of the $c_L$ at still wind for piston-powered aircraft. This makes your corrected airspeed 60 m/s (v is proportional to $\sqrt{c_L}$), and now the recursive nature of the formula rears its ugly head. At 60 m/s, the correction is only 77.5%, so we need to do a few loops until we arrive at a point where the airspeed and the correction factor match. In this example, this would be 57 m/s or 110 kts in case of a piston-powered aircraft.

Consider the case where you are flying into a headwind that equals the published speed for maximum range in still air.

In this case, if you fly at the speed for maximum range in still air, you will have a ground speed of zero, and a range of zero.

To make any progress over the ground (to increase your range), you'll need to fly at an airspeed higher than the speed for maximum range in still air. 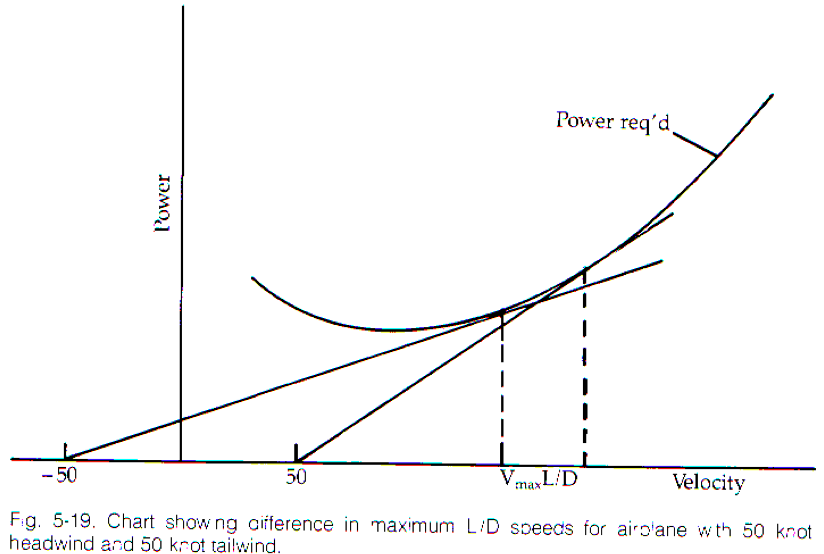 I think the chart caption is wrong. The chart shows the difference in speeds for maximum range, but I don't believe that the airspeed that gives the best L/D ratio is affected by wind.

Airspeed is your speed through an air mass, wind speed or direction will not change your airspeed. What wind direction changes is your ground speed, which is the speed of the aircraft over the surface of the earth. A headwind component reduces your ground speed, while a tailwind increases it. What I think you are asking is how you change your airspeed to best use fuel depending on whether you have a headwind or tailwind.

The general answer to this is that if you have a headwind you would increase your airspeed, and with a tailwind reduce it. If you have a headwind you will take longer to get where you are going, so increasing airspeed will get you there faster and you will use less fuel. A tailwind gets you there faster so you can reduce your airspeed and therefore fuel burn and still get there in the same amount of time as you would if you were in still air.

In practice whether you do this depends on how much of a headwind/tailwind component you have, and what your burn rates are at different airspeeds. Aircraft have a speed/drag curve, at some point the energy you add to go faster just ends up being wasted. You can also get behind the drag curve, flying too slow to be efficient. Adding a bit more speed may make sense, adding a load more speed will likely end up in using more fuel without much result. The opposite is also true, you can end up getting too slow and draggy, burning more fuel.

This simply boils down to energy required to move from point A to point B, conveniently measured in fuel consumption, or, with gliders, distance gained per altitude given. Under no wind conditions, under power we fly at the air speed where wing and engine/prop are most efficient, near Vy, and with gliding, Vbg.

Going into the wind is where you pay the devil his dues. This becomes critical when you have an emergency power out into a 20 knot headwind and your landing field is ahead of you. Might be easier to turn and fly to a field you already passed (altitude permitting). Another alternative is increasing speed above Vbg to get more distance into the wind. It's no longer about the airspeed, it's about respect to ground. You must reach that point anyway you can to land safely.

A chart or graph of max glide distance W.R.T. ground into headwinds would be extremely useful information for any aircraft (listed as best airspeed under those conditions).

Not the answer you're looking for? Browse other questions tagged aircraft-performance wind range or ask your own question.

1
Is there a way to approximate the best glide speed for maximum glide distance in a headwind during flight?
52
Why are many jet aircraft designed to cruise around FL350-370?
34
Why are jet aircraft never designed with a slower cruise speed?
17
Why does the U-2 Dragon Lady not have swept wings?
7
What is the relationship between power and fuel efficiency?
8
Why wasn't MH-17 flying at 33,000ft before it entered Ukrainian airspace?
11
Do aircraft use the majority of their fuel to overcome friction?
14
Do some light sport aircraft have clipped wings to lower their cruise speed?
9
What is the one-engine-inoperative maximum range flight configuration?
7
Why do airliners on autopilot climb during cruise?
See more linked questions

12
How can I get the velocity-power curve for a particular aircraft?
4
How can the range of an aircraft be calculated given real wind conditions?
3
How to calculate the airspeed for maximum specific range?
23
Why is the ratio maximum range speed/maximum endurance speed the same for any airplane?
28
Does a sudden drop of the velocity of the headwind affect the airspeed by lowering it?
6
What experimental techniques should one employ during cruise flight to determine correct airspeed to fly for max range in a headwind or tailwind?
2
How is the range/fuel computed when there is a 3-hour difference for the same route?
3
How does maximum speed vary with altitude?
3
Does lift coefficient for maximum range change for a glider experiencing headwind?
8
Why is the maximum endurance for a piston aircraft at sea level?