When pilots check in with a different controller, how to reference flight level?

When pilots check in with a different controller after they are handed off, how do they report their current altitude in flight levels if they are in level flight or a climb / descent? I feel like saying "level flight level" could be misunderstood.

Can pilots omit the "flight level" phraseology in the examples below?

air-traffic-control phraseology
Share
Improve this question
edited May 4, 2018 at 13:14

The word 'maintaining' is used, not 'level'. Using your example it would be:

The pilot can say maintaining if they're expecting higher/lower, otherwise omit maintaining altogether:

On the first contact with a radar service, for example going from tower to departure, the SID and passing altitude are also mentioned:

In a busy environment you may be asked to 'report call sign only', in this case:

Local guidelines should also be used if different. I couldn't find examples in ICAO Annex 10 and Doc 4444, but clear examples are in the UK's Radiotelephony Manual (click image below to view). 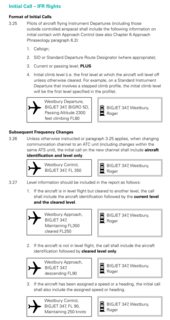 You didn't say which country you're interested in, but in the US the standard phraseology is indeed to use "level" twice. This is from the AIM 5-3-1:

When operating in a radar environment: On initial contact, the pilot should inform the controller of the aircraft’s assigned altitude preceded by the words “level,” or “climbing to,” or “descending to,” as appropriate; and the aircraft’s present vacating altitude, if applicable

At and above 18,000 feet MSL (FL 180), state the words “flight level” followed by the separate digits of the flight level.

So put all that together and you get something like this:

Practically, I hear a lot of pilots omit the words "flight level", perhaps because they seem superfluous:

As for misunderstanding, personally I think that's unlikely even if you use the word "level" twice. A flight level is stated as three digits ("two one zero") whereas an altitude always includes the units, i.e. thousands and hundreds ("five thousand five hundred").

12
How do pilots/controllers deal with overlapping transmissions on the radio?
16
If I'm on a IFR flight plan with appropriate IFR reserves, and I'm given a lower altitude which will consume more fuel, what should I do?
8
Is the phraseology in the early portion of the movie The Net realistic?
9
How to request to fly on a flight level, different from the direction, according to the charts?
7
How should I request flight following when I'm not taking a direct route to my destination?
4
How can an ATC choose the right flight level and heading for airplanes?
7
How unusual were MH370's final ATC exchanges?
6
Are there different sub-types of a mayday call and do pilots use them when declaring emergencies?
1
Descend via STAR, after getting crossing restriction previously
0
How does ATC handle a controller with psychological trauma?