What were the J47's turbine blades made of?

What materials were used to make the General Electric J47 turbine blades in the 1960's?

It's very likely the J47 turbine blades used wrought iron, with alloying elements of aluminium and titanium. The General Electric J47 turbojet is a very very old design - it first flew in May 1948, only 11 years after Frank Whittle's first prototype gas turbine ran. It was the first axial-flow turbojet approved for commercial use in the United States, and was used in many types of aircraft. More than 30,000 were manufactured before production ceased in 1956.

This 1970 report gives a good summary of the materials used in early gas turbine engines.

It states that early turbine blade materials were either iron, nickel, or cobalt based alloy, both cast and forged. (i.e., there we're a mixture of materials, but the largest percentage of any one material was either one of those three).

Nickel based alloys are the ones that are mentioned the most. They are predominantly used today, and there are quite a lot of them (see table 5 in the 1970 report). But, the J47 is so old, it most probably only used an iron based alloy. This comprehensive report covering material development says, in the section on turbine blades:

So, Ni alloys were not used in very early engines. From above then, it is very likely the J47 used a wrought iron alloy, mixed with aluminium and titanium. This is also supported by Fig 1 from the Rolls Royce document mentioned below (the PDF download is free), which shows only wrought alloys used from 1940 to 1955: 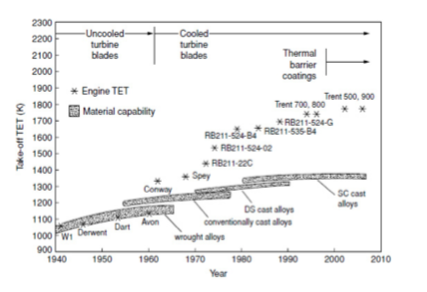 A similar figure, from the TBC report mentioned below, shows Ni based "superalloys" have been used since at least the mid 60's (which is a decade after the J47 production ended!). 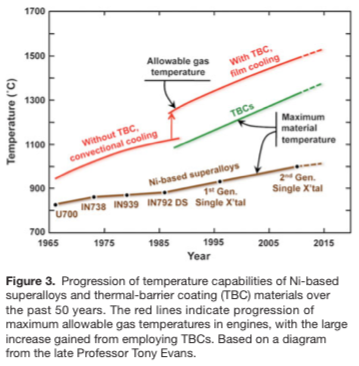 While the main constituent of the material hasn't changed since then what has changed is the method of manufacture, from wrought and forged with no crystal or grain orientation, to cast with crystals orientated along the axis of the blade (i.e. hub to tip, called uniaxial), to blades with single crystals. Also, air cooling now exits, with internal passages, and holes on the blade to provide a thin film of cooling air over its surface. The blades also have a thermal barrier coating, that is a ceramic material which basically insulates them from the hot gasses. Originally TBCs were used to gain extra life compared to the life required in the design specifications (i.e. the TBC wasn't necessary to met the base life requirement, but helped give more life). Now days the gases are so hot in some engines, the TBC is necessary just to meet the design specification minimum life. In this case, the TBC is known as prime reliant. See this article for detailed discussion of TBCs.

This article gives a very good summary of the development of turbine blade cooling technologies by Rolls Royce.

J47-25 turbine blades were made of S-816 Cobalt Alloy, which performs better than steel alloys at temperatures as high as 1600°F (1144K), roughly the Inlet Turbine temperature. Remember that this engine didn't have any sort of blade cooling, only the turbine disk was cooled. You can read more in this NACA report from 1956: https://ntrs.nasa.gov/citations/19930089188

Not the answer you're looking for? Browse other questions tagged jet-engine aviation-history turbine aerospace-materials or ask your own question.