How to locate the coordinates of the Center of Gravity of an airfoil?

I am working on the inertial effects on a variable pitch propeller and i need to define the location of the center of gravity on the airfoil to calculate moments of Inertia and angular momentum. What is the best way to do it?

To compute the inertial properties of your blade, you need a couple of things: a way to compute inertial and elastic properties along the blade, a blade layout, and some idea of the expected load you want this to carry.

Starting with elastic properties--this can be either really straightforward or VERY tricky, especially when you start throwing composites around. That said, this is true primarily because composites can be tailored into having just about whatever material properties you want...but the analysis of composites for essentially what you're doing was the PhD dissertations of two grad students I know. The one is developing an analysis tool for aeroelastically tailored blades (also mentioned here, in a study by Sandia National Labs: http://energy.sandia.gov/wp-content/gallery/uploads/SAND2001-1303A.pdf), which sounds like what you're trying to do. In short, these blades take advantage of strategically tailored material properties in order to achieve variations in blade twist purely based on a blade's operating condition. If you are going to develop your own composites design code (or have one!), I think this is a feasible goal and I'd recommend you to "Analysis and Performance of Fiber Composites" by Agarwal, Broutman, and Chandrashekhara for an intro to composite analysis. Based on that text, you could develop an analytic design code that might get you into the ballpark, and maybe start developing some finite element models to go beyond that. It requires a fair amount of setup, and, since I don't think it was the main thrust of your question, I'm not going to write it out.

I think it suffices to say that back-of-the-envelope estimates for composite materials are hard to come by. That said, it can be a rough approximation to treat composites as "black aluminum", or as an isotropic material with the bulk mechanical properties of the material (though it nullifies the aeroelastic tailoring you're shooting for). Note that this requires you to have a symmetric layup schedule, as described in this short course from the US Naval Academy (https://www.usna.edu/Users/mecheng/pjoyce/composites/Short_Course_2003/7_PAX_Short_Course_Laminate-Orientation-Code.pdf). This isn't the main thrust of your question, however, so I'm not going to delve into it further...it's just a head's up since composites can be more trouble then they are worth, especially if you have access to more traditional machining resources that you can use to make blades out of materials that are easier to shape (plastics, etc.). The FAA has a nice guidebook too, and, depending on how fluent you are with this stuff, it may be of interest: https://www.faa.gov/regulations_policies/handbooks_manuals/aircraft/amt_airframe_handbook/media/ama_Ch07.pdf.

If you're not shooting for aeroelastic tailoring or your analysis, for whatever mission you're planning for doesn't show that you get a terrible performance gain, it may be worth it to just try and make a variable pitch mechanism instead.

Alright -- on to inertial properties. If you're looking to compute the blade's dynamic stability, you'll need inertial properties around multiple axes of rotation to account for the 3 modes of blade motion: blade flapping (i.e., motion of the blade out of plane with the rotation of the propeller), pitching (or twisting), and lagging (motion of the blade in the plane of rotation that occurs in addition to rotation of the blade itself). Blade stability is related to the coupling of these three modes. For an application I had (wing of constant cross section, isotropic material), I assumed the following cross section, including a quarter-chord spar and skin.

To solve for the inertial properties of the section (so that I could do a simplified aeroelastic stability analysis), I moved point by point along the airfoil surface. For example, take the picture below. It's a zoom in on the upper surface of the previous image. 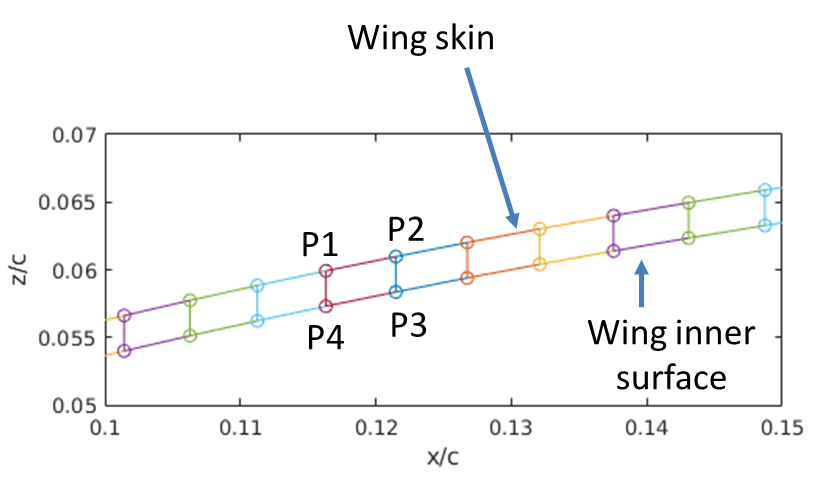 To find the signed area of a convex polygon, in this case the quadrilateral defined by P1, P2, P3, and P4, the equation is (where x is in the chordwise direction, z is in the vertical direction, and y is the spanwise direction along the blade):

...and so on. Similarly, the centroid can be determined by

(formulas are most legibly given at https://en.wikipedia.org/wiki/Polygon#Area_and_centroid). Just use the parallel axis theorem (essentially just weighted average of the centroids and areas) to get all these individual pieces to yield the sectional area and centroid (which, for an isotropic material at least, is the location of your neutral axis).

Moving on the second moment of area (which you'll need for computing stability), it's a similar formula (found at https://en.wikipedia.org/wiki/Second_moment_of_area#Any_polygon):

Apply the parallel axis theorem to get all these individual moments to combine into a sectional property.

Once you have those implemented, the question is just what area do you want to integrate (i.e., is the blade solid, how large is your LE weight, etc.), and what are the elastic properties of those sections. Then just apply the above. The out of plane moment of inertia is the sum of the in-plane moments (i.e., $J = (I_{xx}+I_{zz})$).

Finally, as to actually computing dyanamic/static stability, I have a reference text...but it's a set of course notes and I'm not sure the best way to post it as the method is quite involved. My apologies, but I'm coming up a little short on a good reference for this and may update this question later if I do find something good, however, in the interim, I'd advise you to look at helicopter dynamics texts, which will be a source of material for performance analysis computations too. One source I could find online is by Bramlette and seems to have the basics well covered, but doesn't venture into rotor stability analysis: http://airspot.ru/book/file/63/bramwell_helicopter_dynamics.pdf

Not the answer you're looking for? Browse other questions tagged aircraft-design aerodynamics unmanned-aerial-vehicle airfoil stability or ask your own question.

2
What Inertial effects should be considered to achieve blade stability on a Variable Pitch Propeller tailoredby aerodynamic loads?

3
Why is the numerically determined location of the center of pressure inaccurate near Cl = 0?
5
Where is the best center of gravity?
2
How to calculate variable pitch propeller parameters?
0
How to find trim condition of a sectional airfoil without knowing the angle of attack?
1
How to find coordinates of the geometric center of a NACA 4-digit airfoil?
4
How do we determine whether the airfoil trailing edge should be cusped or pointed?
1
Are the pitching moment and pitching moment coefficient of an airfoil given w.r.t. the aerodynamic center?
4
Why is the aerodynamic center for most airfoils located at the quarter chord location?
1
How do you calculate the optimal cruising speed of an airfoil?