Why is the numerically determined location of the center of pressure inaccurate near Cl = 0?

I am working on an assignment and I need to calculate the center of pressure of an airfoil, through a numerical method (the panel method). I am getting a weird result because it gives its position on a point outside the chord for a determined angle of attack.

When I asked my professor he said that under an angle of attack near the angle of attack that makes Cl=0, it may come out that way, because the center of pressure is calculated through an expression that involves a quotient with the Cl=0 on its denominator.

I am confused because I don't know if it is just that the method fails in that case, or if it has some physical explanation.

If some parts of the airfoil create lift and others a downforce, the center of pressure can be outside of the airfoil's chord at low lift coefficients. This condition is fulfilled for cambered airfoils, airfoils with a deflected flap and especially for rear loading airfoils, which have low camber in the front and high camber in the rear part. Supercritical airfoils meet this last condition.

In airfoil theory, an airfoil creates lift and a moment, because the lift is assumed to attack at the quarter chord point. This point is special because here the moment coefficient does not change with the angle of attack (at least in the inviscid, linear potential theory, which is sufficiently close to reality at large Reynolds numbers to be useful). In reality, positive camber will cause the resulting lift force to act aft of the quarter chord point, and the pitching moment is negative. When lift becomes small and the pitching moment stays constant, the lever arm of that small lift needs to become large to achieve the same moment, and this is when the center of pressure can slip out of the airfoil's chord.

Below you see the result from XFRL5 V6.0.5. I plotted the local center of pressure as a green line. It's elevation over the plane of the wing shows the amount of lift locally created, and the location in streamwise direction shows that it leaves the local chord when lift becomes low. Note that when moving out in spanwise direction the location jumps from far aft of the airfoil to far ahead when the local lift turns negative. At the point of no local lift you have a division by zero error, patched over here by a straight connection between the results from the single panels. 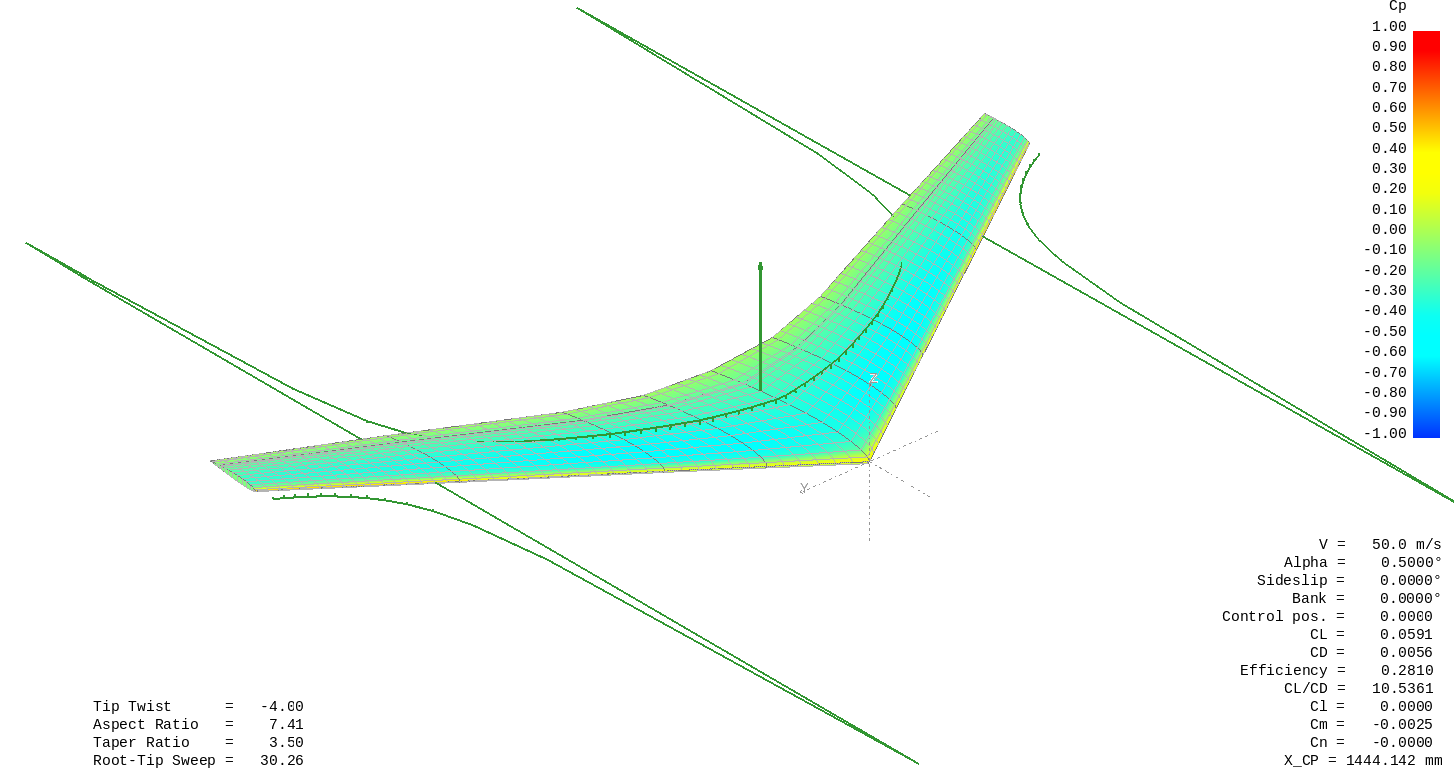 Location of the local center of pressure on a swept wing (own work).

When angle of attack is increased, all additional lift has the Birnbaum distribution, so the local center of pressure moves towards the quarter-chord location.

8
What is the aerodynamic centre and how does it relate to the pitching moment?
3
Resultant force vs AoA, pictures?

6
What is the incidence angle of a propeller in the terminology of the Wright Brothers and how did they obtain it?
5
How does the angle of attack vary in turns?
6
Should the pitching moment be up or down?
3
What is the physical meaning of Mean Aerodynamic Chord?
5
What's the pattern of airflow over the airfoil at high angle of attack?
7
How does having a bigger engine placed slightly more forward and higher impact the plane in pitch?
2
Why does the effective alpha/CL increase at wingtip of swept wing?
2
Is the lift vector reversed during inverted flight?