What is the relation between airspeed and generated heat at constant drag?

I understand higher speed, and higher drag mean higher adiabatic compression leading to heating up the air, and the plane as result. X-15 needed ablative coating to prevent overheating. On reentry of space vehicles heat shielding is the most critical problem. This is perfectly understandable as higher speed with constant or growing air density means higher drag - and this results in higher speed.

I'd like to know how are these values related though.

[for the purpose of this question, let's neglect the issues of engine efficiency. We have a magical rocket engine that weighs nothing and needs no air nor fuel to produce thrust. This is a purely an aerodynamics question.]

Let's maintain such a flight: We're constantly accelerating (slowly); and climbing, at such a rate, that lift remains constant, and evens out with gravity (minus a minimal delta to retain climb). The increase of lift coming from rising airspeed is being offset by decreasing air density as the craft climbs.

With constant lift, and drag being directly proportional to lift, drag remains constant too.

Maintaining constant drag through climb like that, air density is inversely proportional to square of airspeed.

How would heat creation behave in this situation though?

You express a desire to simplify things by assuming a weightless rocket engine, so I follow with a weightless vehicle which only creates drag to overcome aerodynamic resistance.

This resistance has two parts: One is adiabatic compression when the air ahead of the approaching vehicle is compressed, and the second is friction. Friction shows up in strong shocks and in a layer of high shear stress around the vehicle which is called the boundary layer. Let's also neglect other heat sources like solar radiation which becomes more intense with altitude.

If we look at small changes, the adiabatic temperature rise ∆T due to a deceleration from a speed v to zero is: $$∆T = \frac{v^2}{2\cdot c_p}$$ where $c_p$ is the specific heat at constant pressure (unit $\frac{J}{kg\cdot K} = \frac{m^2}{s^2\cdot K}$). The amount of heat Q which gets transferred to our vehicle depends on this temperature increase, but also on the air density $\rho$ and the flow speed: $$Q = v\cdot\rho\cdot c_p\cdot∆T$$ Denser air contains more heat energy, so the proportionality with density should make sense. But why speed? If the hot air is replenished at a faster rate, more heat can be transported to the vehicle's surface per unit of time. Now we have a heat flow which grows with the cube of flow speed, but that is not all. We still need to understand how density will be affected. When air is heated, density drops, but the flow at the forward facing parts of the vehicle is compressed as well, so density goes up in the end: $$\frac{\rho}{\rho_{\infty}} = \left(1 + \frac{\kappa}{2}\cdot Ma^2\cdot c_p\right)^{\frac{1}{\kappa}}$$ with $\kappa$ as the ratio of the specific heats and $Ma$ the Mach number of the flow. Now things get messy because all parameters will change with temperature, so let me short-cut to NACA report 1381 which covers the re-entry heating of spheres. Here the rate of heat transfer is proportional to the cube of speed, so flying faster at constant dynamic pressure will cause a quadratic rise in the temperature of the surrounding air and a rate of heat transfer rising with the cube of speed due to convection.

Q: I'd like to know how are these values related though.

The material's temperature has nothing to do with the performance. The surface temperature at a given heat rate is completely material dependent. 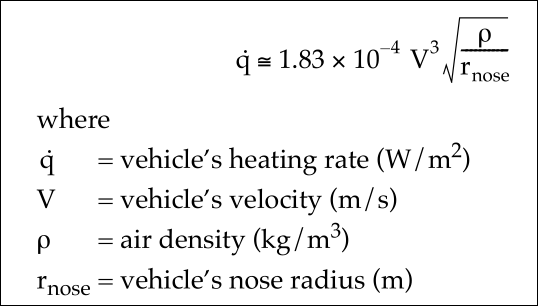 A given airplane moving through the atmosphere at at given weight and velocity requires a specific and determinate amount of energy. That known energy can be expressed in foot-pounds, calories, btu's, etc. There are simple, straightforward conversions between these metrics. btu's typically represent heat energy.

A simple approach to determine the energy in foot-pounds is to fly at a known HP setting and fly for a specific time frame. The product of that HP times that time represents energy. Simply convert it to btu's.

28
What is the typical temperature of an airliner's hull during flight?
17
What is the difference between OAT, RAT, TAT, and SAT?
11
Can stainless steel replace titanium for Mach 3+ speeds?

3
What is the most simple plane lift equation that gives realistic solutions?
2
Regarding the 1902 Wright glider. Why is the airspeed, Va, calculated adding the ground speed, Vg, and wind speed, Vw?
8
Does an accelerating airplane also start climbing?
4
Does lift-to-drag vary with anything beyond geometry?
5
What is the relation between drag and weight?
4
On a constant speed propeller, how is blade pitch related to airspeed and efficiency?
7
What is the “compression ratio” of air hitting the nose?